Give the kids a boat and see what they do? Beat all expectations and come second in the Volvo Ocean race Atlantic leg to Cape Town, thats what. The inexperienced crew of ABN-2 seem to have had a bit of a blast: in the first night's storm "we didn’t really know how windy it was though we couldn’t get the sails down anyway".

Thats right, just enjoy the speed: "We started making a train noise every time we hit 25 knots, but after a while we got tired of it so we raised the level to 27 and we even got tired of that, so we moved it to 30".

And they have their in-port priorities in the right place - replacing a water soaked iPod: "The first thing I will do in Cape Town is buy another one because we can’t race without an iPod on board".

First to the bar

Congratulations to Mike Sanderson and the ABN-1 team who today won the Atlantic leg of the Volvo Ocean race down to Cape Town. After 6,400 miles of the tension, stress and tiredness that comes with ocean racing it was time to order those celebratory drinks - beers that the skipper and crew will have be dreaming of ever since they set out on November the 12th. It must be quite a sight - to see Table Mountain appear over the horizon, to know all their rivals are not just behind but far behind. 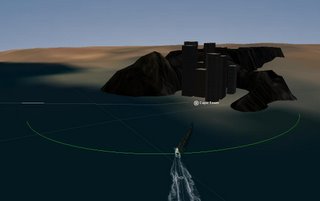 It's been quite a leg - that began by heading out into a storm that broke so many of the others, a fire breaking out on board, and even hitting a shark at 25 knots! Black Betty (as they have nick-named their boat) took it all in its stride - unlike the shark "mini-jaws" which alas failed to survive the encounter.

So how did they win? A number of factors seem to have helped. Firstly by throttling back during the first rough night they managed to avoid the failures that damaged so many of Black Betty's competitors - keel problems one and all. Then by delaying their gybe - till it looked they were popping over to the carribean for a holiday - they in the end gained the advantage of stronger winds. But others survived the storms and played the navigation game well, so where is their edge?

It's hard not to conclude that the ABN design team has come up with a boat faster than the others - especially when reaching, where they have a significant edge. These new Volvo 70s are stretching the technology of what can be achieved with ocean going mono hulls. The sails are so heavy that changes require almost the whole crew just to lug 100kg of weight around. The power they generate can exceed boat breaking strains, needing the skipper to consciously throttle back - hard to do when competiting against others that might be prepared to cut the risk margin to a whisker.

Over this leg records have been broken - the furthest sailed in 24 hours is now an incredible 546 miles. One wonders what they will achieve in the wild southern oceans. No doubt there is bar in Cape Town where tonight you'll here a lot of tall stories from a thirsty bunch of winners.
Posted by JP at 7:49 pm No comments: