According to this post by Elaine Bunting on Yachting World the America's Cup web site never got more than 6,000 visitors per month from the UK during the Louis Vuitton rounds. That is amazingly small for such an expensive event and maybe explains why the sponsor pulled out. Maybe the AC would have done better if they'd followed my suggestions.

However its fair to say I'm not going to get rich either writing this blog. According to Turinas on Messing about in sailboats its ranked at 1.2 millionth on Technorati with an Authority figure of 6 (whatever that means). Top is the 1,000 days at sea blog followed by our favourite sailing grandfather, Tillerman.

Three months traffic stands out:
In a way it's reassuring that all were sailing related - and that a good sailing post gets noticed.

Battle of the Boat Shows 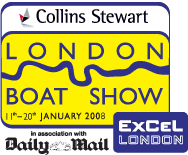 Roll-up roll-up, come to see the battle of the boat shows!

For some reason London has two winter boat shows. Already the power boats covered in protective white are beginning to stack up outside the back entrance to Earls Court.

But which - if either - to go to? Many have been disappointed with Excel as a location. Its miles away and soullessly huge, like an industry convention with endless corridors of stands to "do".

And while the docks are of course great for mooring a wide range of big boats it doesn't have the magic of "gosh, there's a real marina in the middle of Earl's Court"

I wonder what the exhibitors are to do? For the small companies it doesn't become economical to hire space at both, and if the visitors split between the two then total numbers at each will be down making either potentially a bad investment, which means maybe less variety.

No doubt Sunseeker and Princess will be at both, but thats not why I go.

Which raises the question why go? 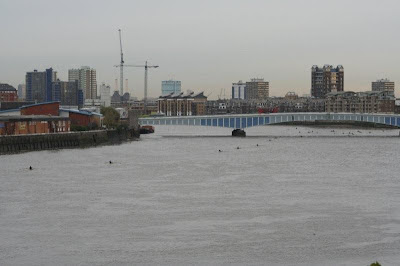 After an earlier post I had a bet with Turinas about whether I could experience three more forms of boats before Christmas. Looks like he's going to win this one!

I had banked on at least one or two in Karachi and a few weekends spare to go canoing or rowing on the Thames. Unfortunately I've been busy (which is of course a very poor excuse) and then this weekend it was to be honest just too cold.

You can see above the sturdy scullers above lining up to row up-river. What you can't see is the biting cold wind which makes me go brrr! and think again.

And do what does my second thought involve? Something like this: 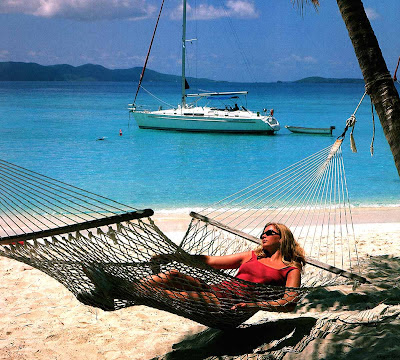 Tempting picture from www.sailingbreezes.com
Posted by JP at 11:55 am 5 comments: 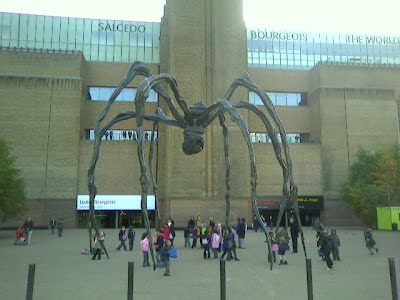 Celebrated my new laptop - a HP Pavilion TX 1340 (which has a screen that rotates round in a very cool way) by re-doing the blog format.

And here is the same spider as the past post. But whereas the previous picture it appeared to be threatening St Pauls, here it looks like it is guarding the Tate.

Things can look differently from another viewpoint!
Posted by JP at 9:21 pm 8 comments: 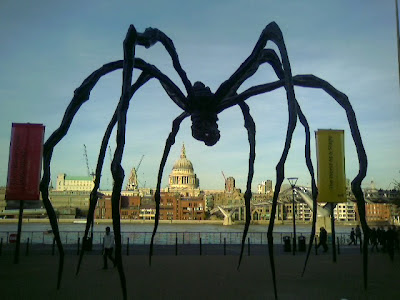 I had an hour between meetings at UK's uber regulator Ofcom so popped into the Tate Modern. Outside lurked a monster spider (above) ready to devour London like some cast iron War of the Worlds.

At least it was solid, unlike the latest installation in the great Turbine Hall, which was to be honest, a bit crackers. Branching its way from one end of the hall to the other there was something like this: 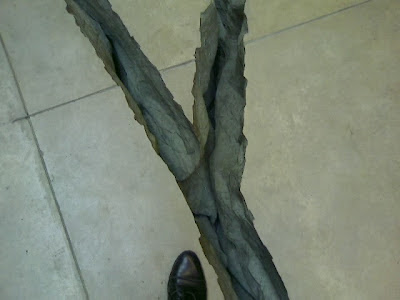 The shoe (mine - to go with the "I'm going to a meeting" suit) is shown for scale.

Its really deep and apparently they had to break open the old concrete floor to some depth before laying new concrete with a built in crack.

Couple of thoughts spring to mind:
- thats a lot of work - real construction work - just to make a point about divisions
- its surprising health and safety haven't closed it down
- not only did they have to dig deep to create it but they will have to dig deep to undo it too
- there are lots of other cracks in the Tate (ok, not so crevice like) but still noticeable - wouldn't they have done?
- after walked along it from one end to the other there's not much else to say or do

So went to see an exhibition that was a bit disappointing apart from the t-shirt: 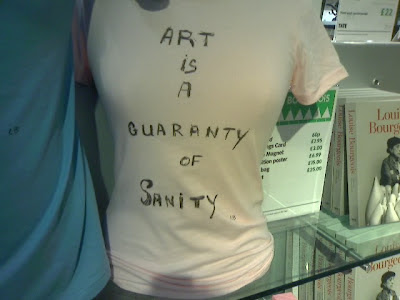 But the view across the Thames to St Pauls under translucent autumn sunshine was as beautiful as ever. With or without a giant cast iron spider.
Posted by JP at 8:13 pm 2 comments:

It's another first blog post, this time first with the new laptop. Still learning which button does what so - bother not that one - where was I - yes, so might be slow posting for a bit.

Also might have lost some data in the old hard disk which is now in the freezer (literally - its meant to be one way to recover data)
Posted by JP at 7:17 pm 2 comments:

.... so there will be no posting or email for a bit while buy another one and try to recover the old hard disk
Posted by JP at 11:04 am 1 comment: 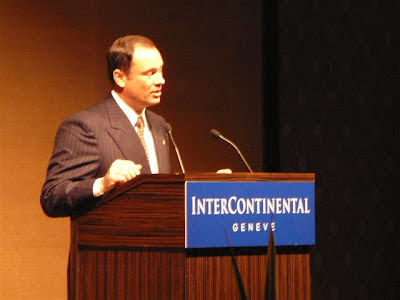 The trip to Geneva ended in a high with the Nasa reception at the Intercontinental Hotel. We were addressed by the astronaut Michael Lopez-Alegria (above) who told us about life on the International Space Station, and talked us through a short film.

It must be a very weird life. There's the years of training, not knowing what mission if any will come. Then there's the very real risks of death associated with launch and re-entry. While up there you are constrained in this tiny tin can where nothing stays still but the views are great.

I could probably cope with that. But the worst bit comes after the mission - years upon years of receptions like this one for the good of Nasa PR. By the end of the evening after meeting and greeting with a long line with sweaty palms, smiling for dozens of snaps, and signing piles of photos his eyes were distinctly glazed.

But exploring space is something that thrills us all - like many when young I wanted to be an astronaut. Its also a force for aspiration and unity in a time of gloom and disunity. To look up at the stars not down into the gutter.

So I hope they get their way and we head back to the Moon. And thanks to those who make it possible - the American tax payer.
Posted by JP at 5:35 pm 1 comment:

Bad week on Lake Geneva .....or how it could be worse 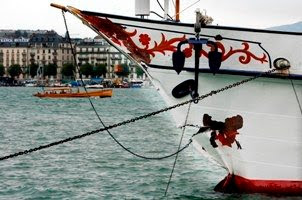 It was a bad week for those boating on Lake Geneva.

First up there's this, the Simplon. Its one of the oldest passenger vessels on Lake Geneva, and it plowed into the side of a dock during a ceremony to unveil the company’s newest high-speed boat (oops). According the the Geneve Tribue it was at the same place that Sissi, the Austrian empress, was assassinated in 1898.

It could have been worse - at least the boat was still afloat afterwards, unlike this one I saw on the rocks by the Parc Mon Repos: 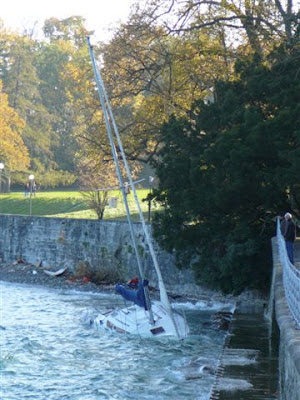 It made an interesting spectacle for those walking in the afternoon sunshine.

But it could have be worse - at least it was in one piece, unlike this yacht just 100 metres further along the lake: 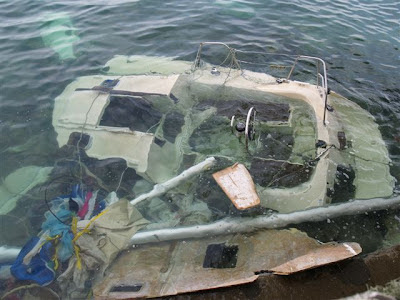 The thin hull of the yacht had snapped, leaving three pieces (the bow is just off-shot). Within a few days all was left was rubble (in particular the metal mast).

Must be sad for the skippers of both yachts - but at least it was a short leap to the rocks along the promenade and safety.

It could have been worse - this week we've been remembering the yacht Ouzo, which was almost certainly run down by the Pride of Bilboa, with the tragic loss of the three sailors.
Posted by JP at 10:43 am No comments: 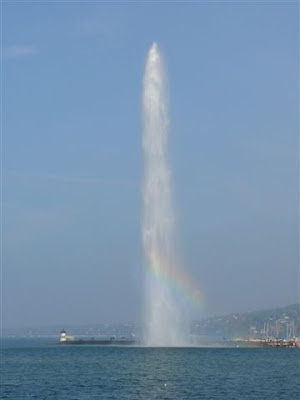 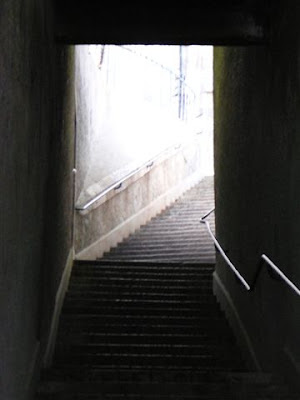 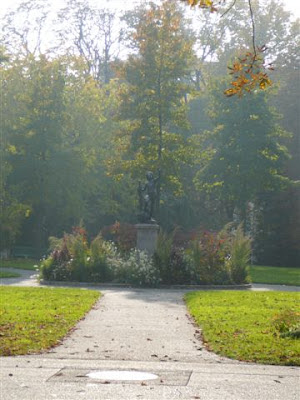 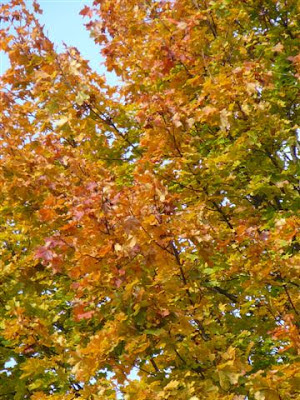