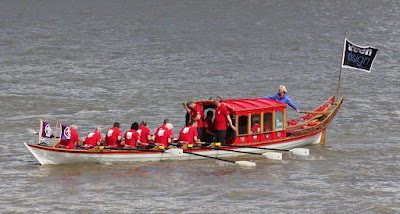 Two boats in the 2015 Great River Race caught my eye in particular.

One was Jubilent (above), a replica of the Naval Victualling Commissioners’ Barge in the shape of a Royal Shallop. It's part of the waterman tradition along with the Doggett’s Coat and Badge race, as described here.

Going further back in history, really much, much further, was the half sized reproduction of the Dover Bronze Age boat:

It felt rather appropriate to see it on the Thames, given that many bronze age artefacts have been found along the banks of the river, as I posted about last year.

I told JP I'd write something on the GRR but you know how it is - couple of late nights, head a bit delicate in the morning and the post somehow gets "eaten by the hair of the dog" if you know what I mean!

But I had to comment on the legends on Hammer of the Gods who clearly had their priorities right, fortified as they were by a bottle of something suitable strong, complementing their no-nonsense look.

Buff would have been right at home here with their "no worries" rowing style:

Good sports one and all!

This is Buff Staysail, over and out!

OMG, you GRR guys ROCK! I mean - those outfits, they were totally awesome - or should that be oarsome - GEDDIT!!!

And ladies of Cam - I love, love, love the look! Feathers and masks!!! Count Sassi in!! 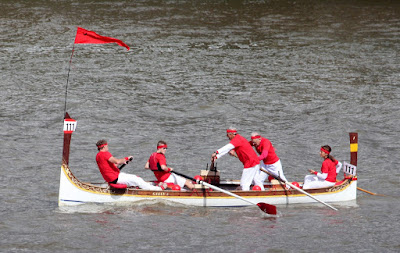 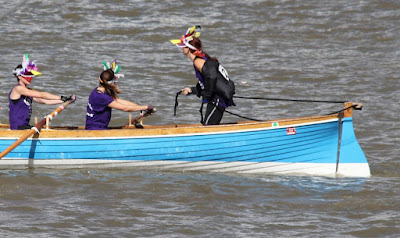 Alas not everyone was pulling their weight, as can be seen by this photo:

Now Pigs going to ham was TOTALLY in the spirit of things but St Quentin, would an Edwardian jacket and boater be too much to ask?? Hmm?

Of course its not all about hats - there's also SELFIES!!! 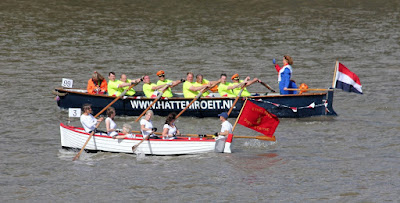 Main thing to remember is that everyone who finished is a winner!!! 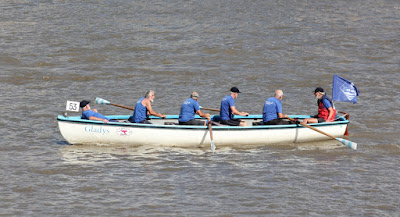 Hurrah for Chris (of Rowing for Pleasure) and co (aka the "Whiskered Terns") on Gladys!

Here they are pulling well during today's Great River Race trying to repeat their previous victories.

And they were seen over-hauling a couple of boats as they headed up the Thames.... 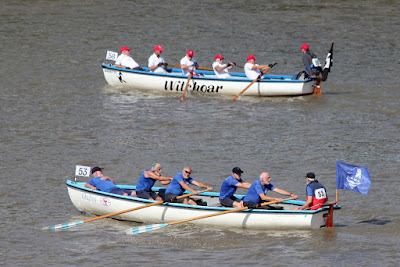 Crossness: The Cathedral of Sewage Works 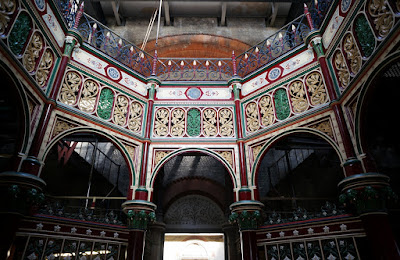 Two hundred years ago London was a mess with raw sewage flowing into the Thames and thousands dying of cholera. In 1858 the "Great Stink" from the river got so bad that Parliament had to close and it was therefore generally agreed that something had to be done.

Enter the engineer Joseph Bazelgette who supervised the building of the great Victorian sewage network for London: 100 miles of intercept sewers, 450 miles of main sewers and 13,000 miles of local sewers. It was future-proofed by being built with double the necessary capacity and is still being used today.

All that waste was sent down the estuary to two pumping stations, one on each of the river banks, which discharged it into the out-flowing Thames.

The pumping station on the south side was built at Crossness and opened on the 4th April 1865, by a lot of big-wigs including the Prince of Wales, Prince Alfred, the Duke of Cambridge, Prince Edward of Saxe-Weimar, the Archbishop of Canterbury, the Archbishop of York and the Lord Mayor of London.

It could have been one of those hidden away, not to be talked about, bits of ugly but necessary machinery. But for some reason the Victorians built the pumping station as a cathedral of industrialisation, ornate cast iron decorations around a central Octagon. 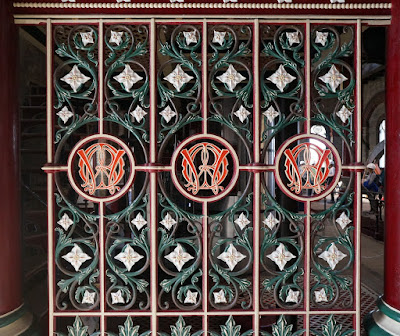 The building contains some of the largest steam engines in the world: their scale can be judged in this picture of two of the beams: 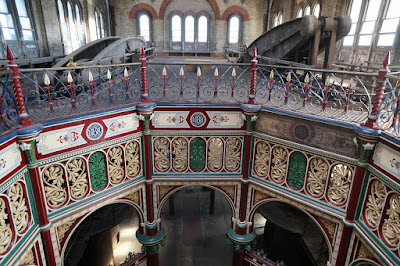 It has a wonderful Gothic feel to it, and you won't be surprised to hear its been the set of many films, TV programmes and pop videos: 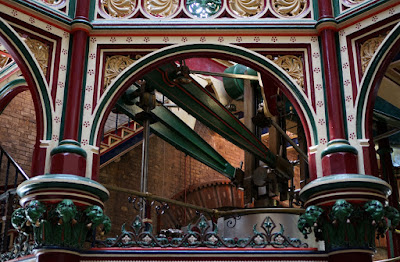 It was last used to pump after the great floods of 1953 and then abandoned. It might have been sold for scrap but fortunately the works were so heavy it would not have been cost effective, and was therefore left to rot.

So it was saved by default for the nation, and is now a Grade 1 listed sewage works. It's not open that often as the restoration program still has many years to go, but one such opportunity arose last weekend as part of the Totally Thames festival.

I passed it when walking from Erith to Greenwich and wanted to go in but it was closed, so I kept an eye open for an opportunity - and was glad I did! 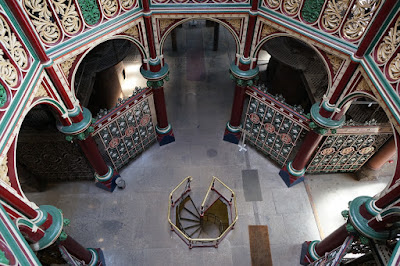 As to that artist mentioned in the previous post? Well of course it was John Martin who came up with the idea 25 years before Bazalgette implemented it.

I've posted about him before, as his life seems amazingly rich, including art and engineering, writers and royals, from racing on steam engines with Brunel to giving a home to the author of "The Mummy".

And Crossness seems to be the embodiment of that mixture of the two cultures, where form and function both show the ideals of the Victorian era.

What did sailors use before toilet paper was invented? 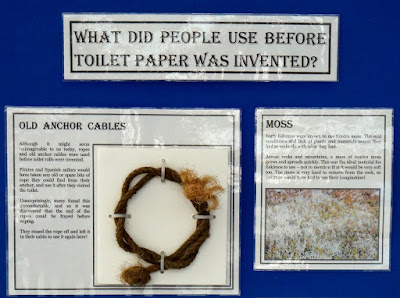 So now you know.

You might be wondering what JP was doing in a museum with these sorts of exhibits?

Well it was grade 1 listed awesome and meant I could babble about one of my favourite artists - can anyone guess who that is and hence where I was? 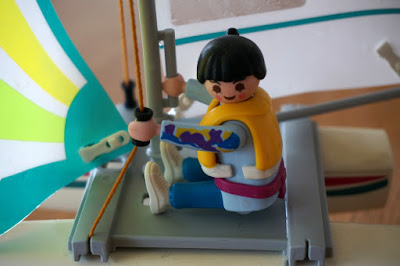 In my last post I asked whether you could add foils to everything, and there could only be one response to that question and add foils to JP's own boat.

It's a classic Hobie cat (or at least a scale version) and clearly new-tech foiling required an expert, so we asked Hannah White of project Speedbird. Alas she was unavailable but mini-fig Hannah (above) was only too happy to join Team JP's foiling project!!

The first question was to the material to use for the foil, and we plumpt for Grape-Nuts cereal packet. This was found to be stronger than the Kellogg's Crunchy-nut equivalent (plus lower sugar - hurrah!): 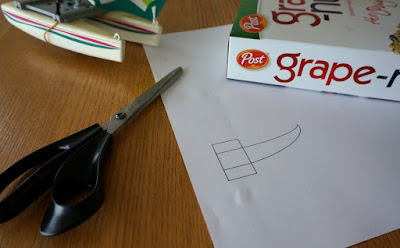 Team JP engineers used high-tech design technology (Microsoft Visio) to define the foil size and shape, to optimise the aerodynamic effect. Naturally the coating was foil (for strength, water resistance and that shiny, laser bright look) and mini-fig Hannah was delighted by the result: 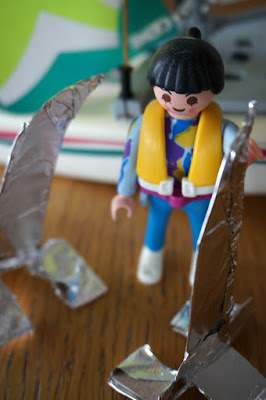 Of course the critical stage was the testing and we had to wait for optimum conditions in terms of water depth, temperature and number of bubbles.

Finally, we were able to launch the JP-foiling boat, and mini-fig Hannah had to hold on tight!! Yes, it was literally flying in the air!! 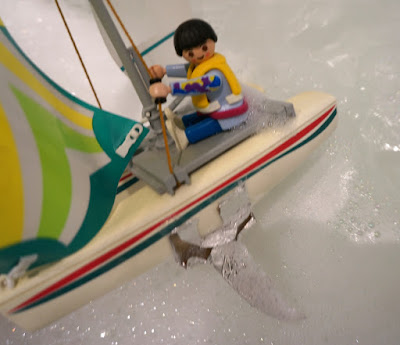 After a couple of successful runs it was back to land for a debrief: 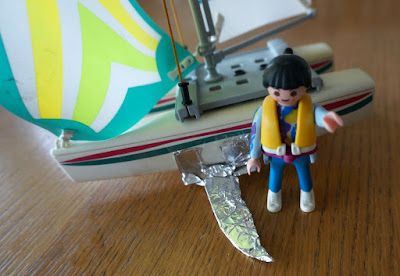 Mini-fig Hannah's verdict: "Big thumbs up!" (or at least, the mini-fig equivalent).

So a success and proof that the JP foil-up project works!!!

It was, if I say so myself, a total foil-up!

Can you - should you - add foils to everything? 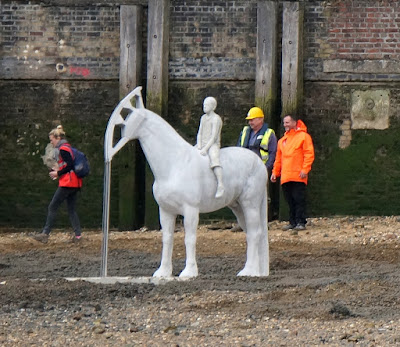 Yesterday was a busy day on the Thames foreshore for men and women with hi-vis gear: but what were they doing, where, why and for how long? 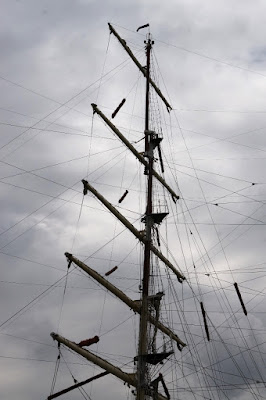 Over the last few years, as part of the Thames Festival, tall ships have been coming to Greenwich for the last weekend of August, a three day long bank holiday.

On Monday there was a parade of sail followed by fireworks!!

There was also rain, lots of rain.

Now rain is typically incredibly rare in London - in fact, several hours can go by without it raining at all! Some people even call it the "Sunny City"!

Yesterday this unusual meteorological condition, combined with having a recurring bug, meant I felt more like making crab with linguine, watching Parks and Recreation, then having an early night.

Today I went exploring down river to see what could be seen of these majestic vessels. But alas, they had headed out to sea, leaving just this one remaining: 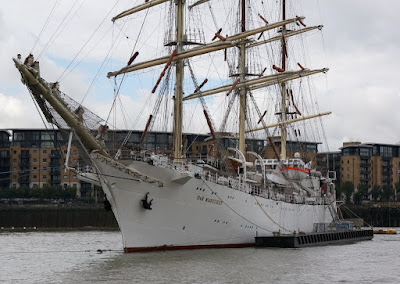 This is the Dar Mlodziezy, a Polish ship built in the Gdansk shipyards of Poland in 1981.

However I overheard one women say she had told her husband it was the Cutty Sark.

Just for comparison, this is the latter, land-locked in its glass sea: 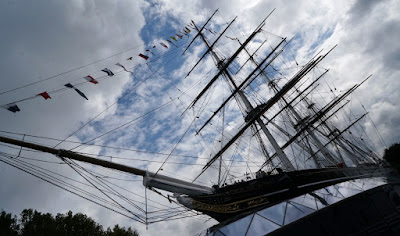 And notice how it is not raining in any of these pictures! The Sunny City indeed!