The Westeros Cup: The Fighting Races 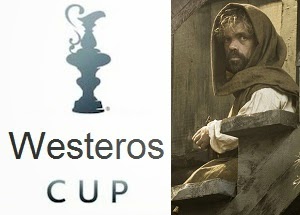 "This isn't how we race back in King's Landing."

"You're a long way from King's Landing."

Tyrion grunted: Jorah had a point.

"And entering the fighting race was your idea."

"Yes, but the alternative was death and castration - in that order. You can see how I was against the whole concept."

The starting horn sounded and Jorah tacked on the start line.

"Of course I usually sail with Jamie, double-handed, but that's where he'd fall short now, if you know what I mean."

Jorah said nothing, eyeing the opposition.

"They're on port, we're on starboard: do you think they'll give way?"

The two racing skiffs collided, and the slaver's prize fighters jumped across the gunwales, swords in one hand and knives in the other. Tyrion ran to the stern while Jorah kicked the feet away under one then stabbed in his right eye. He was about to tackle the other when the skiff accidentally gybed and the boom knocked him over-board.

"Shit" said Tyrion, as the prize fighter approached, grinning. Tyrion grabbed the tiller and pulled it across, forcing another gybe, but the fighter ducked under the boom, approaching closer. Tyrion retreated behind the back-stays and the fighters sword flashed, cutting it in two. The mast collapsed and the fighter was covered in the mainsail. Tyrion teetered on the edge of loosing his balance and falling overboard, but his foot was caught by the tiller and he flipped inwards, landing on the prize fighter.

He jumped up and ran to the bow, trying to hide under jib.

"Got you runt" said the prize fighter, moving forward sword in hand and grin on face.

"Bugger" said Tyrion. He looked left and right for escape but there was none: the other skiff was drifting away and he had no weapons.

Then an arm reached from out of the sea and grabbed the fighters foot dragging him over-board. There was a swirl of spray that turned bloody red, then Jorah Mormont crawled over the stern.

"We will take their boat and win this race."

Tyrion nodded, for once lost for words.

The Westeros Cup: The Mark on the Spinnaker 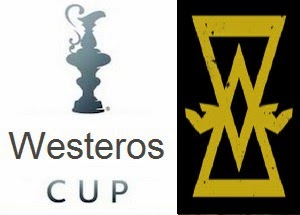 There waterside at King's Landing thronged with the undesirables, desirables and the simply plain.

It was the day of the second race of the Westeros Cup, when the great racing yachts of House Lannister and House Baratheon would go head to head for the first time. The betting shops were doing a roaring trade, gold and silver stacked high, odds fluctuating by the minute.

Suddenly a great cheer arose as the two boats were sighted. They were to sail close by the quay-side, as close as possible, as fast as possible, to hear the cheers and receive the bouquets of flowers that would thrown by admirers, both men and women, to the sailors.

It would be a fine spectacle, with the wind on their quarter, maximing their speed, and the conditions were perfect: each would be raising their largest most impressive sail.

They battled for inches, racing parallel to the enthusiastic, cheering crowd.

Then they raised their great spinnakers.

"They will show a lion and a stag" said a voice from the crowd, male, trying to impress the young woman on his arm.

But when with a crack the great canvases unfurled both were identical. Two triangles, interleaved as an hour-glass, with hands one either side.

The Iron Bank of Braavos.

Which ever yacht was fastest, there would be but one winner today.

The Westeros Cup: The Protest 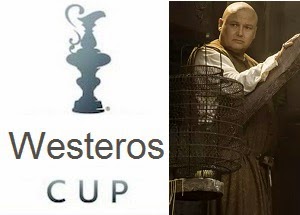 Varys missed Tyrion's wit. Meetings were not just boring without his quips but lacking in ideas and vision. In particular, Pycelle was a moron!

"Let's get this over with" said Varys. "Remind me exactly why we are holding the race protest hearing in Lord Baelish's.... establishment? Err.... hello... Pycelle, concentrate."

Pycelle turned back from exchanging smiles with one of the young ladies and would have blushed if his pulse or conscience had been strong enough.

"Well, it was thought he'd be here and not... where ever he is. And also on the committee there is Tyrion, it was considered it would be convenient for him but he is .... somewhere else. Finally we expected the crews to be here."

"So where are they?"

"Well the Black Watch have returned to their Wall and the Wildlings were either killed in the incident or captured."

"Well, I suppose we better hear from some of the captured Wildlings."

"There would be a problem there: it appears they all fell on a sword and died except one who dunked his head in a cauldron of molten lead."

"Well, who was going to pay for their food?"

"But there are these reports."

Varys looked at the scrolls, picking up one with a sneer. "As if they matter. The key question is who we want to win."

"On the one hand the Black Watch serve the King while Stannis Baratheon is a rebel."

"But if we disallow the Black Watch's win then there's no chance of them defeating Stannis in their semi."

"Tricky. Are there are any mitigating circumstances?"

"The bribes are equally impressive."

Varys wondered what Tyrion would have done, then it came to him.

"I say we accept both bribes and decide the result is there must be a re-race and if there isn't a winner then the previous result stands."

"But neither crew are available."

"Very good" said Pycelle. He picked up the bribe purse.

"If you'll just excuse me" he said, totting out in the direction the young lady had left.