Captain JP is moving at last!

I've have been too busy to post for the last few weeks and I don't think unpacking will be much easier - so this might be the last update till xmas. It's not helped by BT being unbelievably slow in connecting the new build flat to broadband.

In the mean time a show of how it's possible to make an ocean yacht race viewer without the hassle - get Google Earth to do the hard work for you as was done by the Atlantic Rally for Cruisers (ARC). Check out their web site where you can download the kml files for the fleet and also grib data, which when loaded looks something like this: 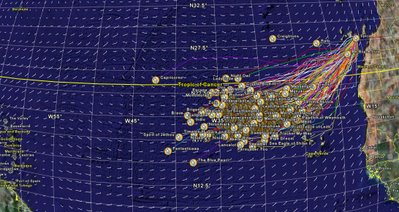 This should be required viewing for the less than professional crew behind the Velux 5 Oceans site. I've sort of lost interest in that race, especially with both Golding and Thomson are now out of the running - even if the drama on both boats did temporarily raised its profiles.

Though again the best way to follow events was by either the Mike Golding or Yachting World sites - the former of which included a (free) video of the abandonment of Hugo Boss and interview by Elaine Bunting who had to think of what to say to Mike who must feel he is under some sort of sailing curse.

I'm finding it more fun to follow the Arc which brings back memories of doing the crossing in 2003. My old boat, Ocean Wandering, is repeating its annual migration - as is another boat we remember from 2003 called Steamy Windows, now with a new owner and skipper.

From the emails coming back it sounds like there is some great trade wind sailing go on.

Something to dream over from a stormy center of London, surrounded by packing boxes.
Posted by JP at 7:04 pm 1 comment: