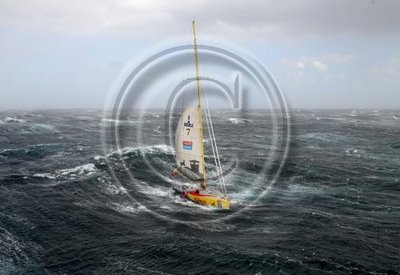 This is a great photo of a great race, spoiled by the vandalism of a short sighted web site. The 5 Oceans web site might not have had the budget of the Volvo, but it is failing on too many points to ignore.

1. Paying for content - this is a bad idea as previously blogged. All boats are funded by sponsorship, and for them the more hits the better. Driving the prime audience away just doesn't make any sense.

2. If you do sell content make sure it's good - for yes, I would stump up if it were worth it. But from what they demo it's a little more than sub YouTube postage stamp sized pixellated annoyance. Now that there is broadband everywhere we should get at least standard TV quality - maybe even HD.

3. Limited news content - there have only been a handful of stories of the web site despite the dramatic events of the last few days. Maybe there is more open to those prepared to pay £20 but guess I'm not going to find out.

4. Poor quality race viewer - god I loved the Volvo Virtual Spectator software. For comparison here is the start from last year where that fleet too hit huge seas and several boats retired. Ain't that beautiful! 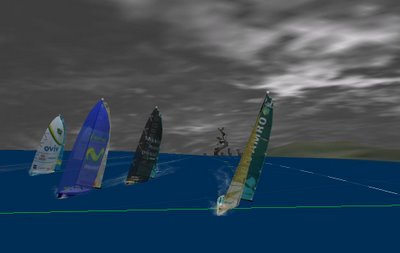 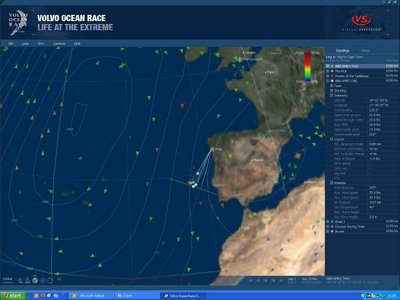 In comparison the Velux 5 Oceans is unusable. With my browser (Firefox) it is an irritation of flashing blocks of colour, sluggish response and unintuitive controls. I've given up every time I've tried it. Last time it locked up Firefox so I had to kill it and re-launch the browser. And it has to be downloaded each time you look at the chart. It doesn't have to be all wizzy like the Volvo - look at the simple Mid Sea position plotter.

5. Crippled pictures - as you can see above with a huge (c) in the middle. Yes, you can register for downloads but the agreement does not cover blogging. It covers web sites of newspapers and magazines which publish in hard-copy - not pure web sites. Its also a pain if all you want is a desktop picture.

6. Too many adverts, crowding out content. The point of the web site should be to inform, not be a "profit center".

Conclusion: all this wouldn't matter if there was coverage of the 5 Oceans on TV, but in the UK we only get to hear about yachting when there are force 10 storms and a British competitor and some dramatic film clips.

The 5 Oceans Race, the sponsors, the back-up teams, and most important, the skippers out there at sea, deserve better. 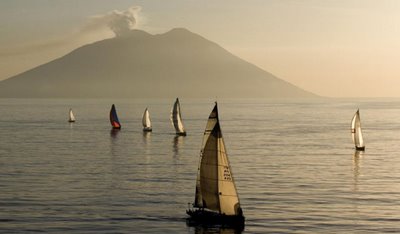 The Rolex Middle Sea fleet have had a lovely view of the volcanic island of Stromboli off Sicily. Stars gleaming bright, lava glowing as it oozes from the crater, and rosy sunset reflecting in the still water.

Is that mountain still there?

When oh when will the wind fill in?

Oh god, not another drifting race again!
Posted by JP at 7:34 pm No comments:

Mistakes galore for the Velux 5 Oceans. Out on the water the skippers on the little fleet are struggling in gale force winds. But if you want to find out more you'll have to pay £19.99 for the "ultimate coverage".

This is really stupid. All the boats are sponsored by companies looking to maximise coverage and what better way to put people off than charging an up front free.

The internet over the last year has seen a great change. Sites that charged for content saw their traffic, their hit count, collapse. Sites like YouTube that allow videos to be uploaded and downloaded for free have seen their traffic increase exponentially and this site was recently valued in the billions of dollars.

Compare this to the Volvo - which not only a huge site with all content free, but offered for download the superb 3D viewer Virtual Spectator that makes the Velux equivalent look pretty shabby.

I hope this short sighted attitude can quickly be changed.
Posted by JP at 6:59 pm 2 comments:

Pirates of the Mediterranean 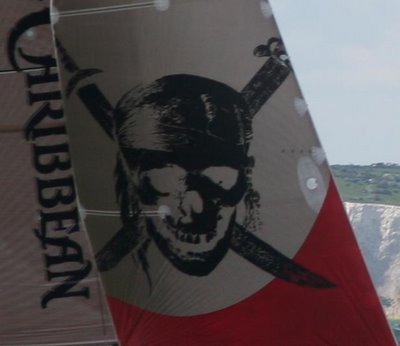 Pirates, the scourge of the seas, dread menace to boat and crew alike, are real life threats in many waters around the world. But would you expect them in the apparently mellow Mediterranean?

Captain JP has heard of a highly suspicious and potentially serious incident that happened to one of the competitors of the recent Rolex Swan Cup in Sardinia.

Due to poor organisation, this yacht was forced out of the marina to anchor close to the shore. To the skipper and crew this was routine - from many years sailing they knew that with calm seas and gentle winds the anchor and chain laid was amble to hold her steady. And so they headed off to eat - annoyed at the race organisers inability to book sufficient berths but not concerned about their yacht's safety.

During their meal a fellow competitor warned them there were intruders onboard - uninvited guests who turned out to be divers. Their story was that the boat was drifting, and they therefore saved her and could claim salvage but would accept a "mere" 1,000 Euros for their troubles.

With the collective experience of those involve it seems extremely unlikely that there was a risk of drifting - if so, what was it? It could be anything from a misunderstanding to attempted blackmail - we will never know.

But the moral is clear: watch your boats. And watch those that watch the boats.
Posted by JP at 8:26 pm No comments: 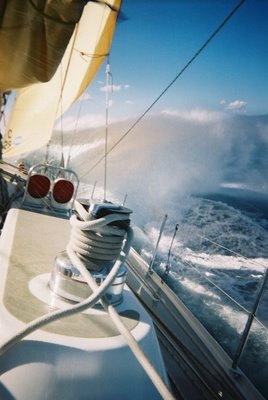 October has brought the sad news that Challenge Business has entered receivership with (according to Yachting World) £9m worth of debts.

There have been rumours all year of the company being in trouble, but it was still a shock to hear that the company behind the Global Challenge has hit the rocks. They and their charasmatic leader Sir Chay Blythe have been a fixture of the sailing circuit, their signature steel cutters familiar sights not just in the Solent but around the world from Cape Town to Sydney.

I had a great time sailing one of the Challenge 67s around the Canary Islands a few years ago (above) watching dolphins and eating bread dipped in the local sauce, Mojo. I hoped one day to go again, maybe a trip to the far north to Spitsbergen or even a Round Britain.

Its clearly tough being a sailing company - last year's casualties including Girls for Sail and Formula 1. Fingers crossed that restructuring can quickly bring back Sir Chay and his boats back on the water.
Posted by JP at 7:42 pm No comments: 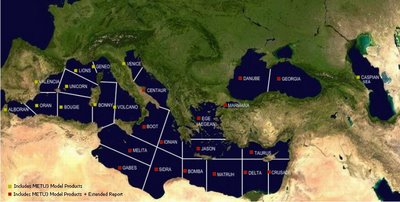 For those of you lucky enough to be flying off to Malta for the 2006 Rolex Mid Sea Race, (or is it? - the web site says 2005) the cruicial question is what will the wind be like?

Will it be another frustrating slow race drifting round the way points or a bruise and sleepless night inducing battle through storms, thunder and lightning? I haven't yet been in really strong winds - 30 knots gusting 45 on the ARC was my tops - but from that I'd choose rough over the smooth every time.

But for the yacht tacticians out there, Angelika's pointed me at this great Turkish site. I particularly like how the sea area around southern Italy is called "Boot".

Bon voyage to all competitors and a safe return to harbour.
Posted by JP at 7:26 pm No comments:

Having got the YouTube account set up I'd thought I'd post you a little video of some dolphins we saw playing around the bow of our yacht as we sailed across the Celtic Sea last year during the Fastnet race in 2005.

It was wonderful - there were so many dolphins it actually got on the BBC. We were having a hard time drifting in the light winds so it was a great pick us up.

The nights are drawing in and the waters are getting colder. Summer's fine sailing days are past for another year and while the leaves are still green it feels like its time to get off the water and into the warmth indoors.

This year I've sailed the Solent, watched the Volvo in-port race at Portsmouth from an old two master, raced round the Isle of Wight with 1,500 other boats, helped deliver Selene from Lisbon to Gibraltar, and enjoyed a day with Emma Sanderson on the Volvo 60 Pindar.

It might not be the absolute end with a friend talking about chartering a boat in November and exploring the ports where pubs have live bands - places like Yarmouth and Poole. But its almost time to hang up the oilies with a "that's all folks" for another year.

But what about next year? I was talking to a friend last week who used to crew on J's till he discovered kite surfing - yup, flying through the water powered by a kite that can pull him 20 feet into the air.

It sounded amazing. So one of goals for next year is try something new. We've been planning a multi-generation family holiday to one of Sunsail's Turkish resorts, where there are a host of Laser's, RS, cats, day yachts, and much much more.

It has the name that has already got my nephew sniggering - Phokaia. 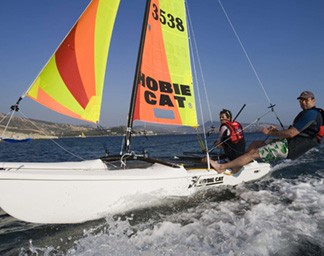 What are your plans?
Posted by JP at 7:58 pm No comments: