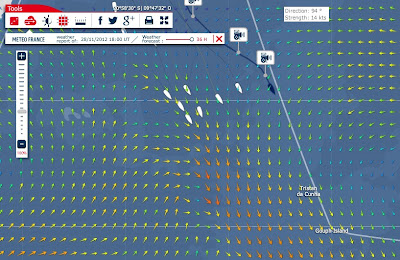 1. In the Vendee Globe, has the current leader Armel gone too far east & is about to fall into a wind hole watching the others go zooming by?

2. Now that Ben Ainslie has announced he is focussing on AC rather than Olympics, what does that actually mean? I understood he's not actually skippering an AC72 next summer

3. We've been having floods here in the UK, and the village of Muchelney in Somerset has been cut off. In Google Earth I spotted a number of really good place names nearby, but which of the following was made up: 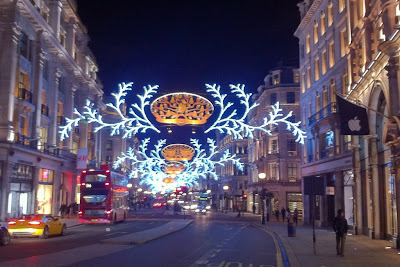 This weekend, while out on the town at the Royal Opera House and last night at the Wigmore Hall I also had a chance to catch up on some of the Christmas decorations, and here's just a sample: 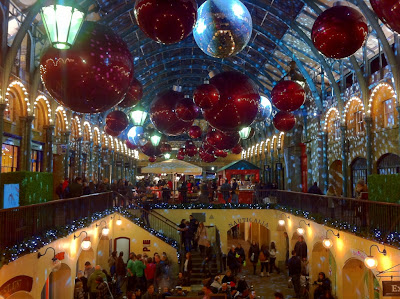 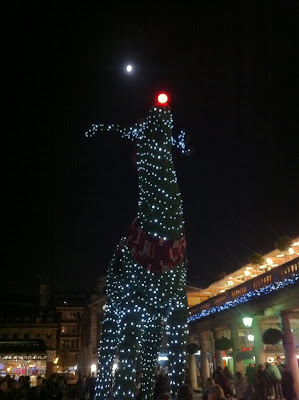 Some of you should recognise these locations!
Posted by JP at 10:47 pm 2 comments:

Email ThisBlogThis!Share to TwitterShare to FacebookShare to Pinterest
Labels: london 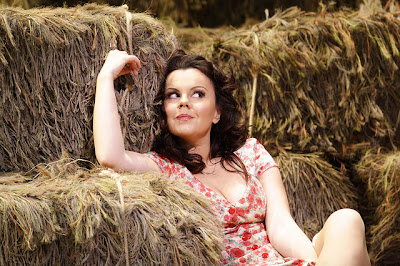 I've never been a big fan of Donizetti's music but it's hard to remember an evening as much fun as Friday's trip to his opera L'elisir d'amore, or The Elixir of Love.

I've blogged before about The Royal Opera House's sometimes bizarrely bad choice in stage design, such as the Don Giovanni set made of those glass bricks used by interior designers for fancy bathrooms.

This time however they've created a gem, set in what felt like a remote 1950s Italian country community, all hay stacks, Vespa electric bikes (working), isolated roadside tavernas and fields stretching to the far horizon. Apparently it was inspired by Fellini - see this video.

The cast was superb too, with Aleksandra Kurzak (above) a peachy Adina, sensuous in her summer dresses, and Roberto Alagna as the smitten Nemorino, plus Fabio Capitanucci as Beclore and Ambrogio Maestri as the quack Dr Dulcamara.

Well acted through-out it was very funny, its wit and good humour making it impossible not to smile pretty much from beginning to end.

There was even a dog! Think Eddie from Frasier, racing across the stage to steal the scene and leave the audience gagging for the next act. 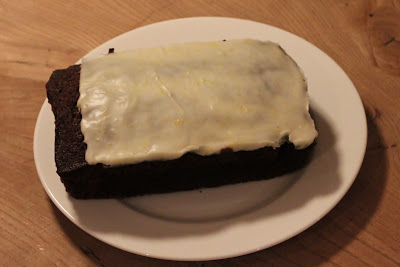 Last weekend I traveled to north London, bringing gifts to my new niece including this ginger cake with lemon icing (*) and was rewarded not just by the sight of the little one but also a compliment.

"When I grow up I want to be like uncle JP" said one of the nephews.

I'd like to think it was because of my adventures on the high seas, slick gybes on Aeolus, cleaning up at the Fowey Regatta, or being alone on watch at midnight somewhere in the Arctic Circle.

But no, it was because:
a) I could make this cake any time I liked and eat, if I wanted, all of it (alas the bathroom scales say I can't)
b) Because of my gadgets (iPhone and Nexus 7 tablet) that have cool games on them

To quote Tillerman, life is good


(*) you might have noticed that the lemon icing does not cover the entire cake. This is because one of the nieces likes the cake but not the icing and I try to be a good uncle.
Posted by JP at 9:08 pm 7 comments:

Nature's Radar in the Journal of Navigation 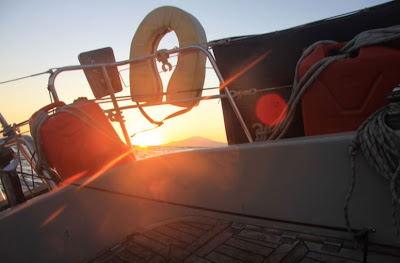 Now the evenings have well and truly drawn in, what better than a good article to read on the topics of sailing, navigation and the natural world.

The Natural Navigator Tristan Gooley's paper based upon observations during our sail to the Arctic Circle has been published in the Journal of Navigation and in it you can learn all about how to navigate simply by counting the birds.

Download the PDF from the Natural Navigator's web site here. 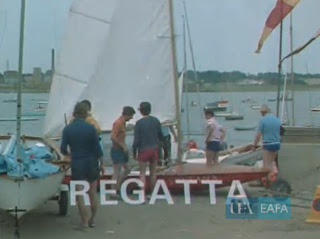 More archive film today, this time of sailing back in the 1970s along the south east coast of England from the East Anglia Film Archive.

Regatta is a 10 minute short based around the 1973 dinghy and punt races at the the old town of Manningtree, with a dollup of history added for colour (actually in black 'n' white).

I wonder how many bloggers or blog readers remember sailing here - or even better, can spot themselves?
Posted by JP at 8:44 pm 2 comments:

From the sea to the land beyond 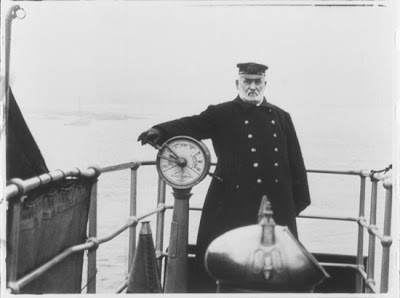 I've just watched the BBC4 film "From the sea to the land beyond" which explores Britain's coastline through archive video, and it was an absolute gem.

Unlike most TV documentaries that over-focus on the presenter's character this had none. Nearly wordless it connected well chosen historic clips full of truth and life, together with a soundtrack from one of my favourite bands, the appropriately named "British Sea Power".

Sailors and fishermen, soldiers and dockers, nature and developers, babies and dancing girls, lighthouses and lifeboats, over a hundred years of life at the shore of our seas flowed by in a poetic, lyrical way. Apart from one glance at twitter to make sure others were watching this too, it captured my attention from beginning to end.

If you've got access to iPlayer you can watch it here - and I hope you enjoy it as much as I did.

Like a song to the sea it was magical, wonderful and moving.

Drama on and off the water 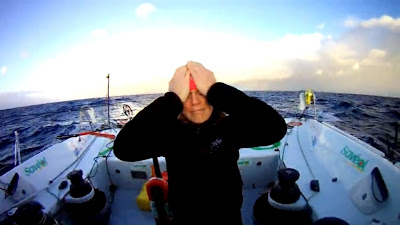 Work levels are still pretty manic so its good to have the distraction of the Vendee Globe to escape into.

Alas its all gone pear shaped for Sam Davies (above, from here) after she lost her mast in the first few days, and she sounded pretty gutted in this video.

But its not all bad as JP has a brand new niece - woo hoo! I have baked the parents and other nephews & nieces a ginger cake with lemon icing a bit like this earlier trial: 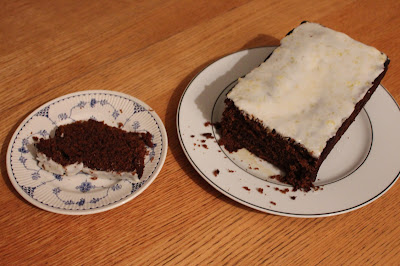 If it would help I'd send a slice to Sam in the hope it would cheer her up, though I'm not sure how to attached it to an email.

So I might just have to eat it myself. 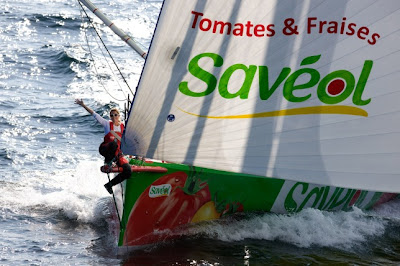 An autumnal weekend in London 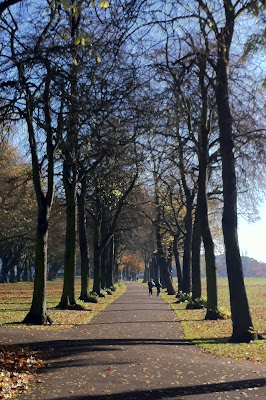 It's a lovely crisp but sunny day today here in the London, just right to walking through the park kicking at the leaves.

Yesterday was a bit wetter and cloudier for the Fuller's head of river fours: 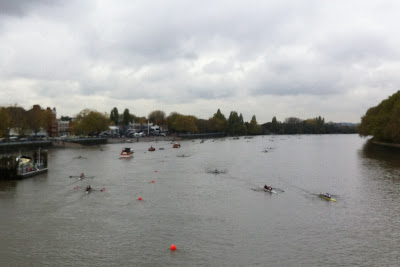 I watched just long enough to feel the cold before heading off to the shops to buy the ingredients for a warming beef casserole.

Today went to the most civilized of musical events, namely one of the Wigmore Hall's Sunday morning concerts, complete with free coffee or sherry, overlooked by its stunning cupola. 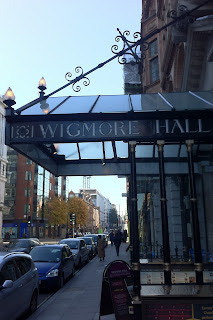 Now just re-grouping before heading off to see the latest Bond, Skyfall, which will be louder and less civilized, though hopefully in a good way.

Isn't it nice not to work over a weekend?
Posted by JP at 4:25 pm No comments:

How to buy a wetsuit? 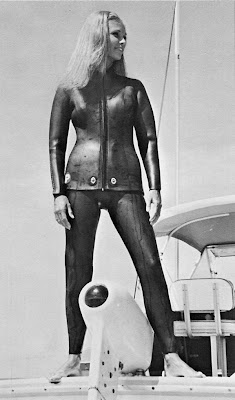 It's about that time of year when JP becomes Uncle JP and starts making lists of present ideas.

One possibility is a wetsuit for a dinghy sailor, something for south coast Britain sea temperatures and those pesky little Lasers that keep tipping over.

I've never bought a wetsuit before so I'm looking for pointers and thought - why not ask those readers who actually have one to tell all. 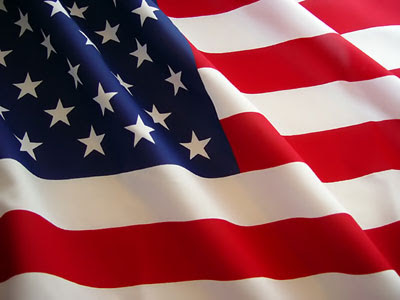 The result is finally in after a grinding process that many wondered would ever end.

There were shocks and twists along the way, with the Rhodes Island surprise catching many out - who would have thought that Tillerman would turn to the dark side?

But after literally billions having not been spent there could only be two winners.

So congratulations to Britain and Oracle Team USA's Ben Ainslie and China's Lijia Xu - ISAF sailors of the year!!

Tomorrow's a big day for you yanks but alas yours truly won't be on the menu after the sad demise of the Buff for President campaign, though I should say that the Billionaires for Buff PAC is still accepting contributions via the Cayman Islands (hint hint Mitt) if you want this expert's endorsement.

Couple of points for you, first up JP's been asked a couple of times on his travels across the pond "how do you think we're looking after your colonies?" and its been puzzling him.

The thing is those darn limeys have invaded almost everywhere. Indeed according to the map above from The Telegraph (see here) they've only missed 20 countries in their rampage across the world.

But JP says that doesn't count as that's all a long time ago, not like the modern Britain (see the London Olympics etc).

Anyhow the point is you're in a boat with pretty much everyone else and so hopefully its clear why they don't spend long worrying about any one country in particular.

Secondly note that this is not a competition!! Don't feel you have to beat the Brits at this! That's what the Olympics is for (see London 2012).

Finally if you do find yourself invading (say) the Marshall Islands (4 athletes at the London 2012 Olympics) it might be polite to ask them if they'd like join in, for old times sake.

Well that's a lot of words for Buff, so I'll say over and out and head over to the fridge for a cold one!

Best of luck from one ex-colony to another!

The colour of water - part 2 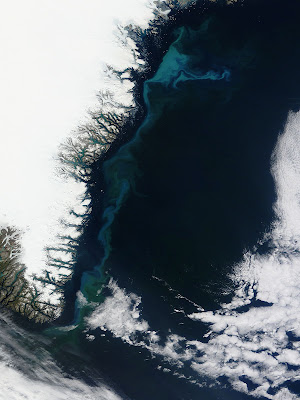 Back in July, just before the Olympics I posted this picture: 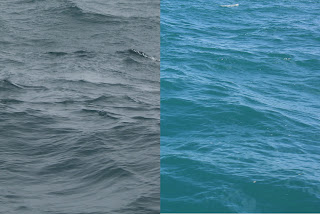 It shows two examples of the colour of the water we saw when sailing to the Arctic Circle.

The change was dramatic, almost like the boundary between two rivers, and we crossed between the two colours several times while we were between Iceland and Greenland.

Since then I did a bit of Googling and found the picture at the top, taken by NASA's Terra satellite. It beautifully shows the phytoplankton bloom that caused this colouration.

It is also this bloom that makes these waters so rich in wildlife, such as the dolphins and whales we were lucky enough to see.
Posted by JP at 5:26 pm No comments:

Fireworks in the sky 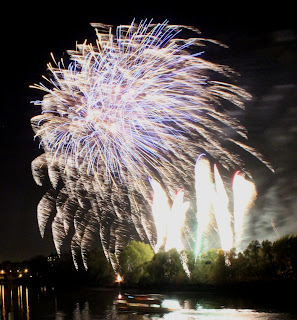 It's a good night's sky at the moment, with the Moon and Jupiter bright in the East.

Oh yes, and a couple of fireworks!

- or the 3rd, if its the nearest convenient Saturday.