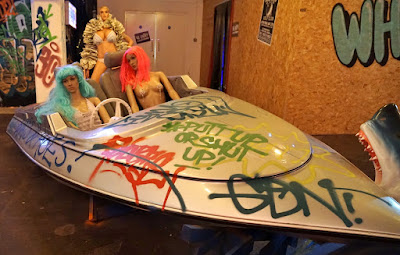 What is going on with this speedboat, its ...err... crew and the shark?

Updated: the clue was the words "'#putt up or shut up" on the foredeck as the speedboat and shark are part of a crazy golf course: 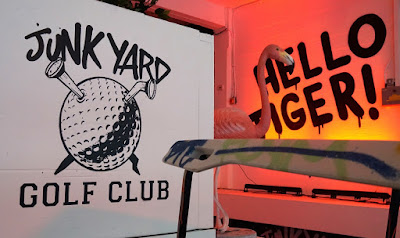 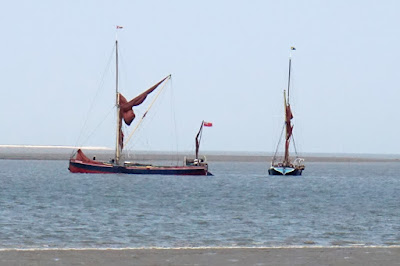 This was the day after the Medway Barge Match so I guess they'd been racing the day before.

Regular readers will know I have a side interest in photography and one of the sites I keep track of is dpreview.

To test the video features of the new Canon EOS 80D they chose to show it in action while the presenter did something interesting, in this case make from scratch a Greenland style skin on frame kayak. Previously they'd tested the Sony A6300 by making a video about making local nettle beer.

While not tempted by the Canon (as posted earlier I can't see the point of the mirror and associated weight) that kayak does look tempting.

Alas Seattle isn't exactly on London's tube network, but its a great idea. 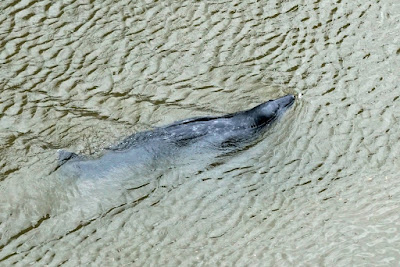 It's always good to see the Thames as a living river, so much improved over the pollution of just a few decades ago.

In the stretch of the Thames between the Wandle River and Beverly Brook I've recently seen the seal above and also large fish such as one below. 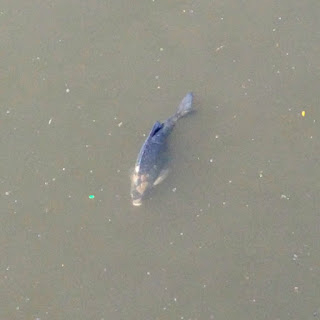 Its interesting how the populations change: this year there seems to be much fewer cormorants around than last year for some reason.

Will have to keep watching those waters...

My2fish has just posted a music video and its not The National so I'm disappointed and posting one of my own.

A few weeks ago I was flying back to the UK, listening to music on my headphones, and as the plane reached the coastline of good ol' blighty the following words could just be heard above the roar of the engines:

It was the song "Spit it out" by The Maccabees (above) and felt very appropriate.

Then we flew over this old lady's house, which seemed a bit rude as she'd just had her 90th birthday: 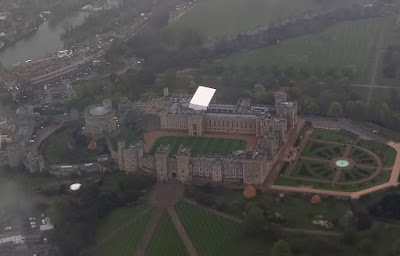 But it was good to be home, even if they are apparently burying those murals.

The many faces of the Thames

I got a bit misty eyed when watching this (isn't the Thames fab) until I switched on the generic sound-track (yawn).

They also, alas, missed out the story about the Jack Russell that swum through the Thames Barrier.

Cardboard boat sails on the Thames 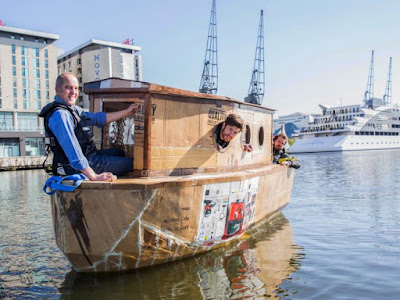 Who would go afloat on a boat made of cardboard? Surely these craft would float only on the imaginary ocean that spreads across the living room floor?

But Kevin McCloud made a fully working houseboat and sailed it down the Thames to highlight what can be done with the mountain of stuff we throw away each day.

Apparently the aim is to cross the English Channel in it next year. 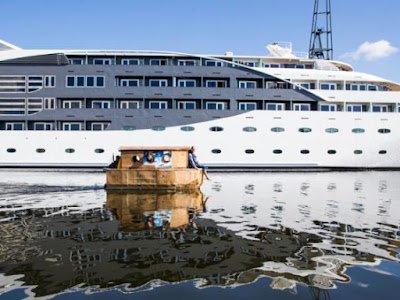 All images from Grand Designs via The Independent and there's also videos about it here (complete with cardboard remote controlled boat) and here. 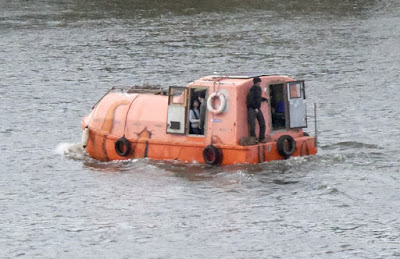 This converted lifeboat was spotted on the Thames - but what is going on? 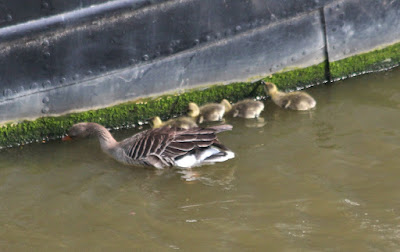 Just what every family with young needs - something nice to nibble on for breakfast! Want to see the kids grow up strong and healthy!

What's this? Are there rivals out on the Thames that want to take food away from the mouths of these little 'un?

Never fear! Daddy will frighten them off!! 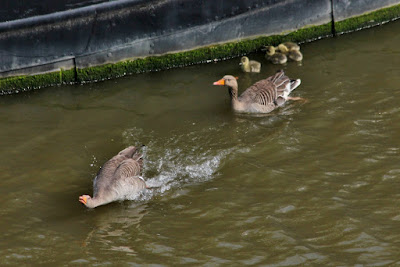 Job done, the family returns to the important task of the morning meal, while dad keeps an eye out for any threats: 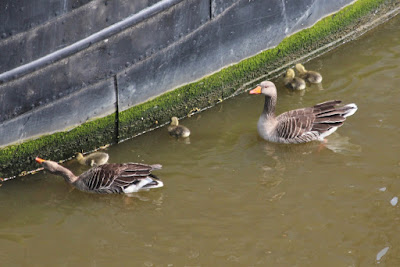 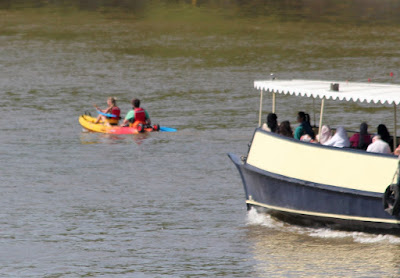 With summer weather finally arriving the Thames was indeed busy, boats having to manoeuvre around each other. 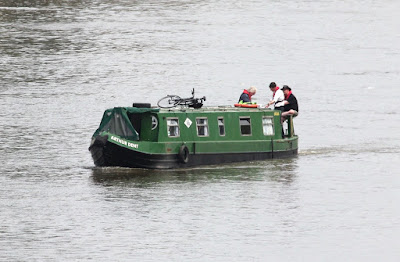 Yes there were sailors too, just not when I had camera to hand. 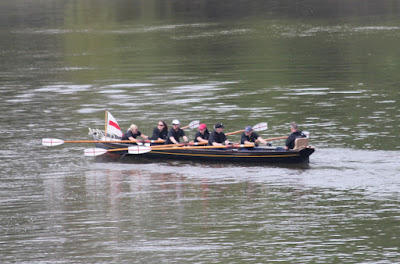 As someone once said (a warm Sunday afternoon is making it too soporific for me to look up who exactly) "exercise is wonderful: I could watch it all day". 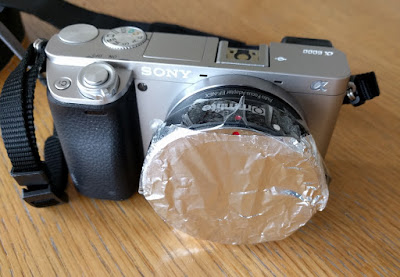 The BBC posted some pictures taken using pinhole cameras, and it being a three day weekend in the UK I decided that would be a good project to try out.

So I took the lens off my Sony A6000 and replaced it with some tin-foil taped to the camera body. I then got the finest needle I could find and pierced the foil in the centre. Then I altered the settings to allow photos to be taken without a recognised lens being attached.

The first pictures were disappointing: 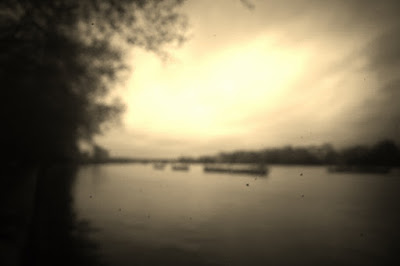 The problem is that the hole has to be very small, particularly if pinhole is close to the sensor, as noted in this Wikipedia article, so maybe further away would be better?

Therefore I attached the Commlite adapter to increase the distance from pinhole to sensor, cut a square of fresh tinfoil (top photo) and tried again. The results were indeed better: 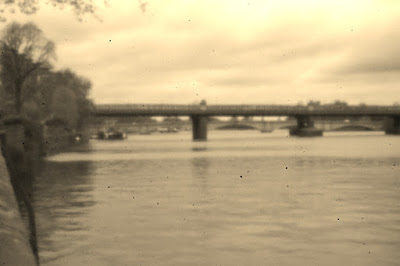 Still not that sharp, but I guess that's why we uses lenses! 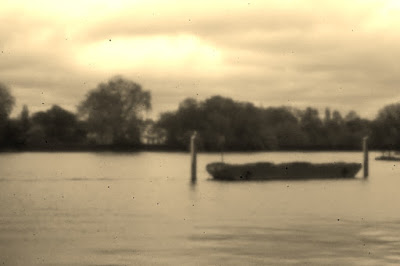 However it was an interesting effect and experiment to try out.

Through the Islington Tunnel on a Narrowboat 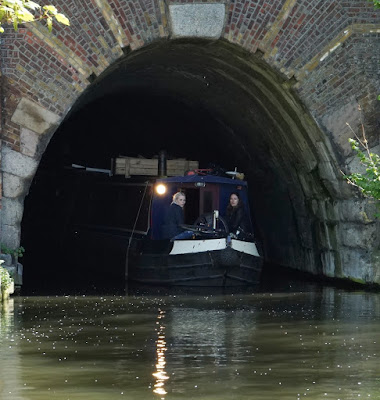 I decided to head out on another canal walk, after enjoying the Limehouse canal loop in January. The plan was to start at Kings Cross and head west along the Regents Canal, but it didn't work out. It was to be much better than that.

Before striding out towards Camden I thought I'd have a quick look at the entrance of the Islington Tunnel, which opened back in 1818. There were a couple of boats waiting at the entrance, presumably as the tunnel was occupied, and indeed shortly after the first of a trio of narrowboats made its appearance (above).

The waiting boats began to get ready, mostly well crewed, but one had just a single crew and maybe because he wanted company or maybe could read my mind he asked if I'd like to go through on his boat. Err.... that would be a yes.

So off we headed, heading not west as planned but east, into the dark: 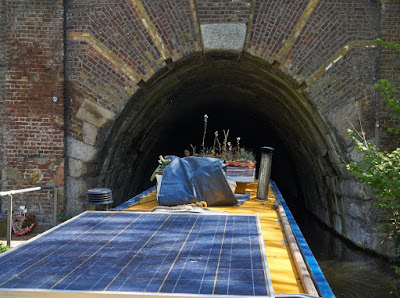 The tunnel is 878m long and so it did take some time get through. It was really dark apart from two spots, literally the light at the end of the tunnel in either direction. 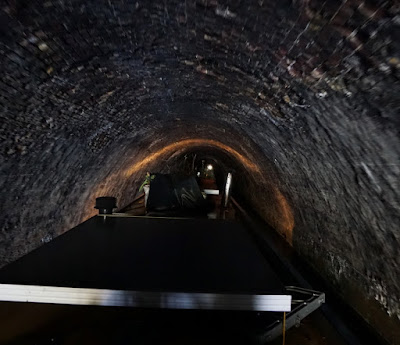 There was time to exchange stories, voices in the dark as nothing could be seen. My companion was a circus clown called Daniel and he was from Lisbon. He rents nights on his boat out on AirBnB if you want to stay. I told him stories of the ARC, 21 days spent sailing across the Atlantic.

Slowly the far end grew brighter until we emerged the other side of the Angel: 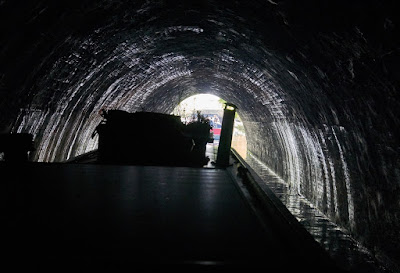 Daniel steered his yellow narrowboat into the next lock, which is where I said my thanks and goodbye.

I continued walking east, following the canal towards Limehouse, out in the bright sunshine.