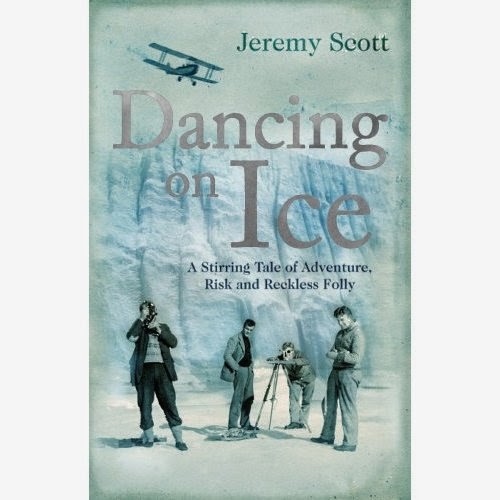 I just loved this book.

Dancing on Ice by Jeremy Scott tells the story of the British Arctic Air Route Expedition to Greenland in 1930 - 31 by a group of young men fresh from uni (mostly Cambridge).

It was the era of bright young things, flappers, jazz, Bertie Wooster, the charleston, stiff upper lips and ripping yarns read by public school boys such as these.

The idea was that the development of air travel to America would require observational data which was thin on the ground, particularly in the middle of Greenland. So they set off to collect it and to prove they were true men of the British Empire.

As mentioned in the previous post they brought a surreal air to their travels, famously dancing on ice. They were welcomed by the Inuits (who they called Eskimos) of the east coast of Greenland that had had very little contact with the outside world before them.

The Inuit culture was overwhelmingly communal and open to outsiders. Where as the vision of the expedition hut had been a bit like a common room at school or uni, with the mingling of local women it became more like a country house retreat, where the sport was hunting for seals rather than shooting pheasants. And yes, the following year included the birth of a mixed race child.

The weather station high on the Greenland ice pack was however no picnic. Porting supplies to it was so hard that there was only enough for one person, Courtauld, who became the most solitary prisoner on Earth, literally buried alive in a land with 130 mph winds and -50C temperatures.

Courtauld came from a rich family that raised a media storm when the first relief expedition failed to find the station, and it is possible that this story became the seed from which Arthur Ransome's Winter Holiday was born, as it was written just a year or two later.

A great read full of curios and interesting characters, and an absolute bargain if you can get it second hand on Amazon as I did. 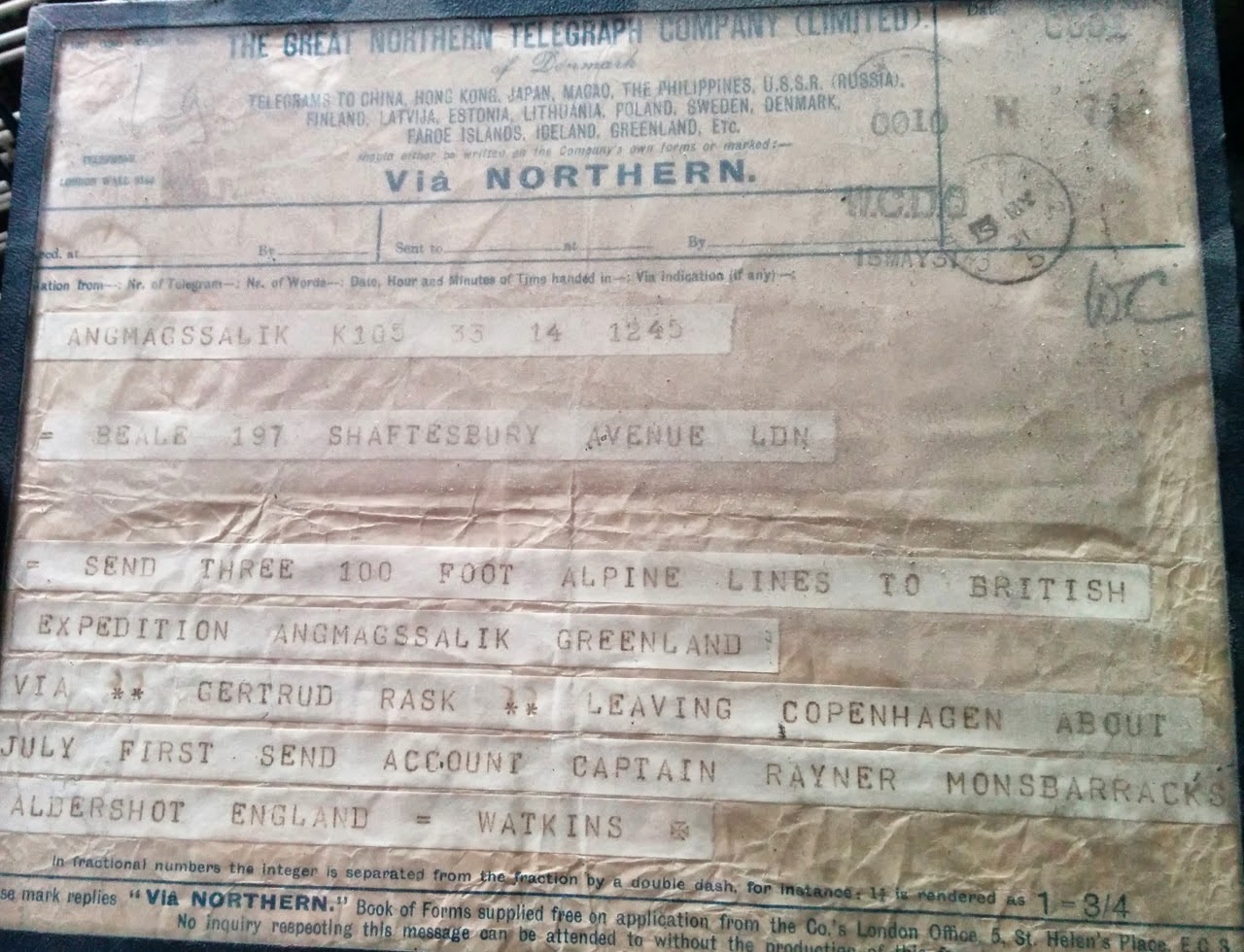 I am currently reading a book about the BAARE and it is a corker - already a contender for the list of favourites.

Full review to come but in the meantime here is a multiple choice quiz. Bonus marks for suggesting what the d. answers should be.

2. What the pre-expedition training involve?
a. Regime of exercises performed in the Harrods ice store
b. Solo hikes across the Scottish Highlands
c. Running home to Chelsea from one's Mayfair dance
d. [...]

3.  Why was a magistrate required for entry into Greenland?
a. To check the passports, visas and landing permits
b. To search the vessel for illegal materials
c. To visually inspect for VD
d. [...]

4. What were the expeditions first actions on arrival at Angmagssalik?
a. Give the dogs a run ashore
b. Search for a safe anchorage
c. Set up the gramophone and teach the locals the charleston
d. [...]

5. What was the attic of the expedition hut used for?
a. Store the smelly whale meat dog food
b. Store the long range radio used to contact the Government wireless station in Aldershot
c. Accommodation for the local young women recruited as ...er... staff
d. [...]

Updated: the answers were c) in all cases, though for Q3 all three were probably correct 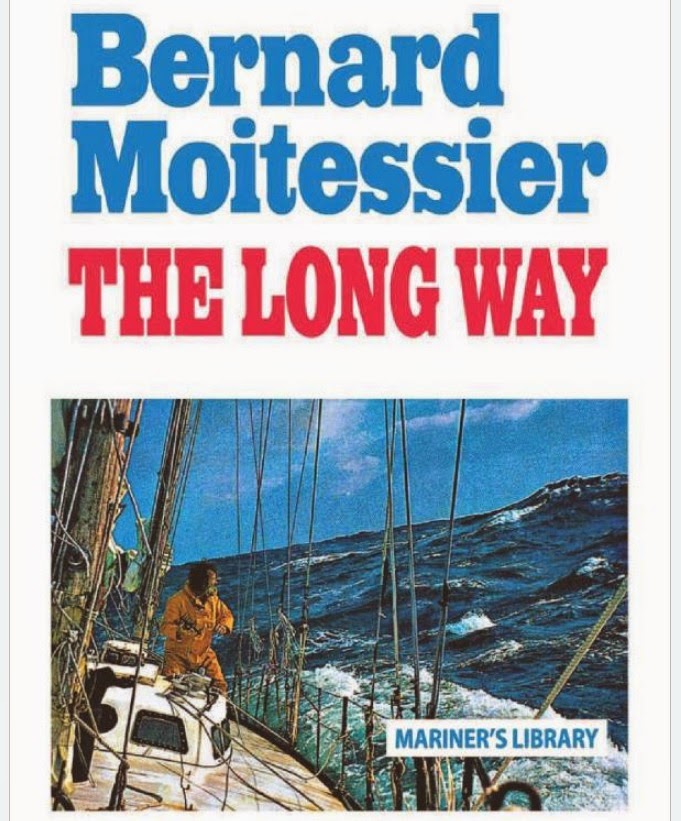 Not everyone in the Golden Globe, the first solo round the world yacht race, were to return to Plymouth.

Donald Crowhurst went mad, leaving a journal of fantasies before leaping overboard. Bernard Moitessier avoided that fate by sailing on, crossing his tracks to end at Tahiti, and "The Long Way" is his story.

The start is mundane, a Proustian, almost boring, description of oceanic sailing by a master. Wind directions, sail areas, sea states, temperatures: a log of his voyage down the Atlantic, into the Indian and then the Pacific.

A couple of times he heads towards land to throw despatches towards ships, such as fishermen. These encounters take it out of him and they became scarcer, the penultimate message sent at Tasmania.

After that he was alone for a long, long time, and it changed him.

The first phase was the zen of sailing, Moitessier at one with his yacht, Joshua, surfing the long waves of the southern oceans, watching the auorora australia, communicating with porpoises and practising yoga in the nude.

As he turned north into the Atlantic he changed again. Maybe he had been on his own too long, in a boat with no long range radio, but his voice became troubled and physically he was exhausted.

He writes of the monster and of an earth alive, suffering. It becomes the Monster "destroying our earth and trampling the soul of men". "Before long no one will be free... they have already become inhuman".

How close did he get to following Crowhurst? Maybe it was the image in his head of Tahiti that saved him and lead to his most famous and final message of that voyage:


I am continuing non-stop towards the Pacific Islands because I am happy at sea, and perhaps also to save my soul.

But he wasn't always happy at sea, at times he was depressed, and there are gaps of days, weeks in his book, where storms and knock-downs are mentioned as passed events.

He would find his monster waiting for him in Tahiti in the form of the developers with their concrete and bulldozers. His last chapters are a rail against modernity and in praise of hippies and the Pope.

This is not a great book despite these changes in voice but because of them.

They tell of the isolation at sea but also the growth of spirit that comes from being in the midst of wild nature for months on end.

Such detachment can lead to unusual thoughts and if sanity is defined by the majority, then this could lead some to query Moitessier's mental health.

But "The Long Way" allows us all to step outside the everyday and instead to follow Moitessier and ask questions of our modern, environmentally destructive world. 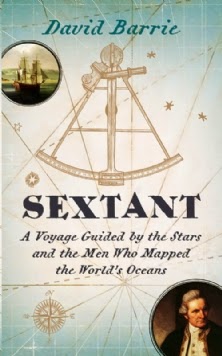 Sextant by David Barrie is the story of the navigational instrument of that name.

It tells the history of its development and some of the great voyages that were possible using its ability to accurately measure angles from a pitching and rolling deck.

The book is framed by the story of the author's first transatlantic sail as a teenager with a family friend, Colin, and his cousin (Colin's that is, not David's) Alexa, also a teenager.

It's well written and I found it interesting, even though it covered the same ground as other sailing history books I've read. It linked explorers and sailors such as Cook, Vancouver, Flinders, Fitzroy, Slocum, Bligh and Shackleton together via their navigational tools.

It even ends up with a pitch for natural navigation and a reference to Tristan's book.

The only unanswered question was what it had been like as a teenage boy to spend weeks in close proximity to a teenage girl, namely Alexa, in that first transatlantic crossing. Maybe its time to add Dove to my reading list.

Overall a recommended read about one of offshore sailing's key navigational tools. 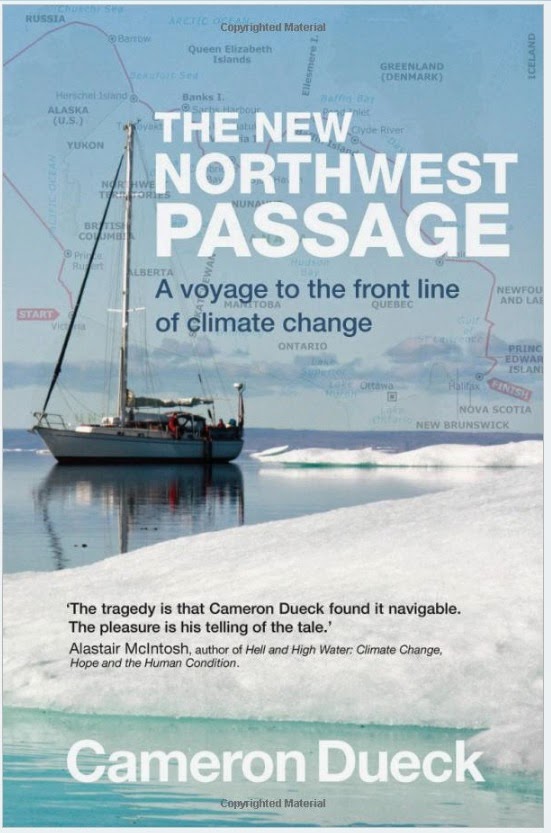 It tells the story of how three men (plus for parts of the journey another man and a woman for the leg to Alaska) sailed the north-west passage across the top of Canada. They went west to east, from Victoria to Halifax, which made me wonder if it should be called the south-east passage.

A route that was so difficult it became a legend has become increasingly "do-able" as global warming kicks in, melting the ice, opening the passage to sailing yachts.

One of the objectives of the voyage was to highlight this disturbing change, but also its impact on local communities and the tensions between traditions and modernity (see this video clip for more).

But what surprised me was how few surprises there were. Yes there was ice to dodge (been there), yes they did hit some bergy bits (alas ditto too) and yes they saw the northern lights (tick), but there was less drama than expected.

Of course any 8,000 mile voyage will have breakages, including the heads (yuck), the electrics and the engine mountings, and there will be the odd storm, but that's offshore sailing for you.

The biggest drama came from bear meat infected with a type of roundworm called trichinosis, which the crew (and those in other boats) ate, leaving one hospitalised. That really sounded unpleasant.

Their success was yet another demonstration of the truth behind this book: that global warming is not a media generated myth, nor the invention of scientists wanting funding, but real, happening already, and getting worse.

I am totally thrilled by today's announcement that Ben Ainslie has put together a GB team for the next America's Cup.

Of course the rules for the 35th AC have been rigged - the Defenders get two boats, everyone else has just the one.

But Blighty as the underdogs, battling against injustice - that has always been a classic story, one we can all rally behind.

So this is one campaign I can fully support.

They didn't think we could pull off the Olympics, and look at how brilliant the London 2012 games were. 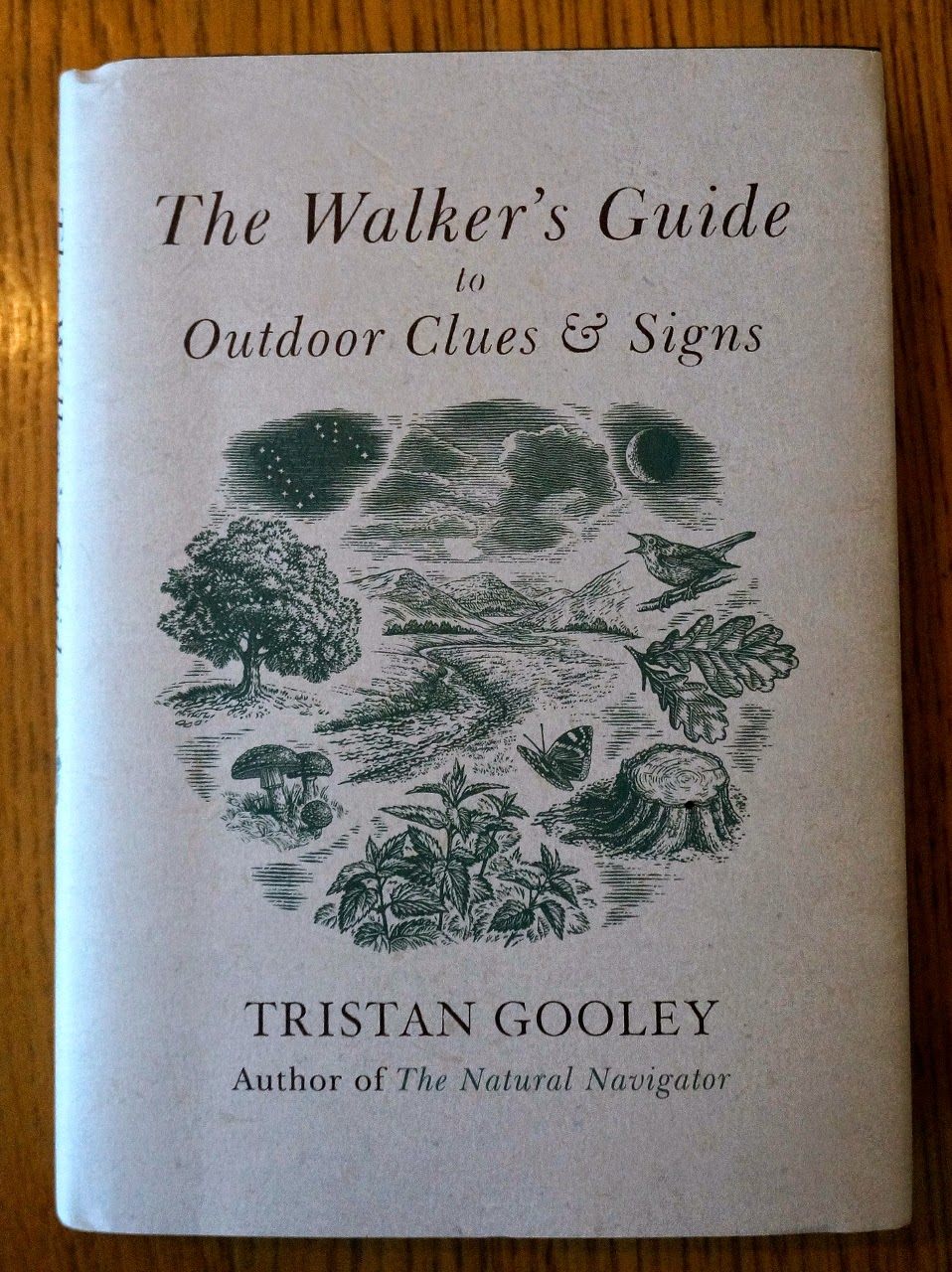 The Walker's Guide is brilliant, and I'm not saying this just 'cos Tristan is a mate, it really is.

I've spent years walking, watching the clouds and sky and yet reading this I learnt masses.

The best way of describing this is that Tristan is Sherlock, seeing clues in the natural world that others miss, whether the geometry of rainbows, the shape of leaves, messages sent by butterflies and much much more.

I did wonder if Tristan is indeed Sherlock, who would I be? Watson maybe - or least one of the Watsons? Hopefully not a Lestrade anyhow.

As well as being comprehensive with 850 clues and signs, it is also a fantastic read, slipping down easily. Since reading it I've been listening out for the calls of birds and looking again at the angles tree branches make, seeing the world afresh, and how many books can do that?

Check out this review - in which I leant something else new.

Apparently something we learnt on our trip to the Arctic Circle is now part of the survival guide for Britain's force's air crews.

Sea shanties are not what they used to be.

But with mermaids, Lily Cole, clarinet playing kayakers, murky waters, seagulls, wanton destruction of musical instruments and a hot cello player (who can play while ice skating backwards), all from Cambridge Uni, what's not to like. 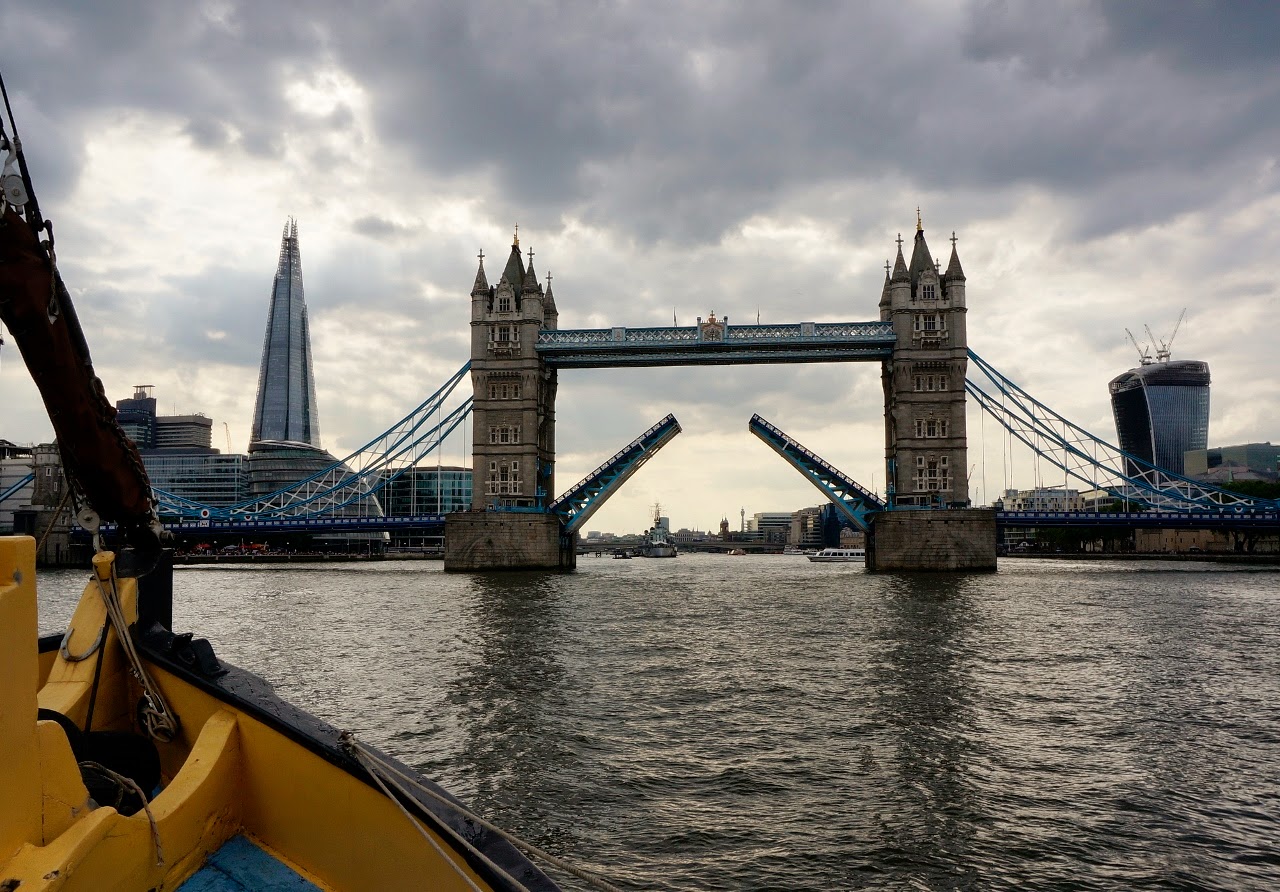 What a great way to spend an afternoon!