The Westeros Cup: The Yacht of Queens 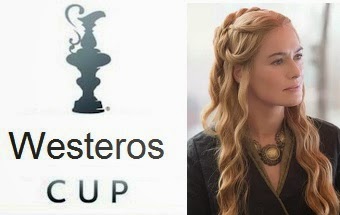 So what if all those common people had died? Why was Margaery telling her about this?

"And who invited Lord Walder Frey anyhow?" she said. "I mean, he looks like a caretaker."

She laughed at her own joke, the fool.

"I wouldn't know" said Cersei. "I am not familiar with caretakers let alone what rags they choose to wear. What matters to me is the Cup, our Cup."

"Indeed" said Margaery. "And our yacht. The Yacht of the Queen."

Her chin went up a faction at the word, but Cersei spotted it. Queen indeed: there'd be only one queen here, just as there could only be one captain on a boat.

"Or should that be Queens." Margaery was being diplomatic. "There'll be no talk of the girls boat, will there?"

Cersei snorted at the idea. Not if they wanted to live. "You say such sweet things" she said, while wondering if Qyburn would sew the troubling trollop's lips together forever if she asked.

"Of course not, after all you're the Queen Mother now, not some slip of a girl."

Cersei's lips tightened. Sewing was too good for her.

"I will be in command" she said. "As you are so kind to remind me, I am the senior."

It was like a tacking duel, move and counter-move until in the end they each received a DNF.

There never would be a yacht of queens, but it didn't matter as long as that upstart wasn't helming.

Jamie would sail for her.

The Westeros Cup: the Iron Cup 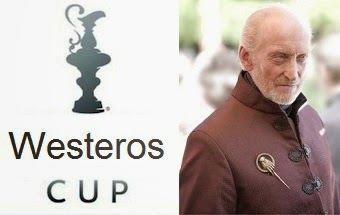 Tommen Barartheon was alone in the Great Hall with the body of his grandfather, Lord Tywin Lannister.

Alone, but not free.

He had the power to order the courtiers out, that was new. He no longer feared the random cruelties of his brother, Joffrey. His mother might control everything but Margaery was opening his eyes.

But not free, never that.

He turned his back on the body and walked down the hall towards the great Iron Cup. Forged from the anchors of a thousand yachts, it was said, melted by the fire of the great dragon Balerion, hundreds of years ago.

His grandfather might be dead but his voice echoed in Tommen's head. "It is our Cup, it is ours by right, never to be lost."

Nothing was forbidden when it came to the Cup. "You race or you drown", so mother said.

He sighed and raised a hand to touch its surface. The harsh iron sucked the heat from his hand, ice cold that only dragon fire could warm.

He would never be free of the Iron Cup.

The Westeros America's Cup: The After Party

Arya Stark circulated the party, the perfect serving boy. It was a risk, she knew, someone might recognise her, though it was a risk worth taking. Jon Snow might be here! She longed to see her half-brother. So many tales to tell, so long since Winterfell. And he'd won his race, the first in the Westeros America's Cup!

She knew what to do, having been taught by none other than Lord Tywin Lannister. Be invisible but watchful, which suited her, so she could listen in and hear of news of the Starks.

"Yes, the race committee is to meet: there has been a protest."

She spotted a well filled purse on the belt of one guest and was tempted: she hadn't eaten for several days now.

"L plus R equals J" said a monk, face hidden in the shadow of his cape. "Now where did you hear that?"

Suddenly one guest gasped, choking. Green foam formed around his mouth, eyes went red then tears of blood were streaming down his face. Hands grasped at neck, nails attempting to dig inwards. Then the body collapsed on the ground and began to twitch, shudders that grew and then slackened, easing into death.

There was a scream, several screams, then dozens and the guests were falling like cattle on feast night.

Ayra tried to pull back, in case it was contagious, but then she realised: the wine! It had been poisoned!

A voice was triumphant.

"Ha ha ha ha ha! That will teach you, scum, worthless sons and daughters of swine!"

She had to escape: there would be questions. But first that purse.

Tonight she would eat the finest roast meats.

The Westeros America's Cup: Round 1

There were two crows on the ridge over looking Kings Landing and the rotting carcass of a sheep. One crow dug at the sheep's eyeball, loosening it, cawing in triumph. The other watched, as if waiting. Then a figure clambered from beyond, a giant, dragging a boy on a sled.

The giant looked out over the city towards the sea, then started, pointing at the glistening waters.

"So! It has begun" said Bran. "The Westeros America's Cup has begun. May the seven gods save us all!"

Out at sea two trimarans raced towards the mark. In one were grim men, lost, far from their home, their Wall.

"We are are starboard tack" said Jon Snow. "They must give way to us."

"You know nothing, Jon Snow" said a beautiful red haired woman. "Do you think the Wildlings will play by the rules? Are you such a fool?"

As if in answer there was a crash and over the hull's edge poured a flood of warriors, yelling screaming. The Black Watch battled hard and valiantly but were doomed, outnumbered. The foredeck team were beheaded, blood splattering across the number 1 genoa as torsos collapsed tangled in the sheets. The trimmers had time to get swords up but their enemies had spears, one of which was already jammed through a black coated chest, protruding out the back, glistening bright red in the sunshine.

But then there were trumpets and gleams of light as on either side rescuers arrived on racing skiffs, cutting down like grass the Wildlings, their limbs scattered like straw into the ship's wake. Two figures jumped onto the Black Watch's afterdeck, Stannis Baratheon of Dragonstone and Davos Seaworth.

"This is done" said Stannis. "Finnish it!"

And so the first race was won.

Three boats, the RNLI, PLA and the Thames police, but a single thought: it's not a bad day to be on duty when its the Boat Races and the sun is out. 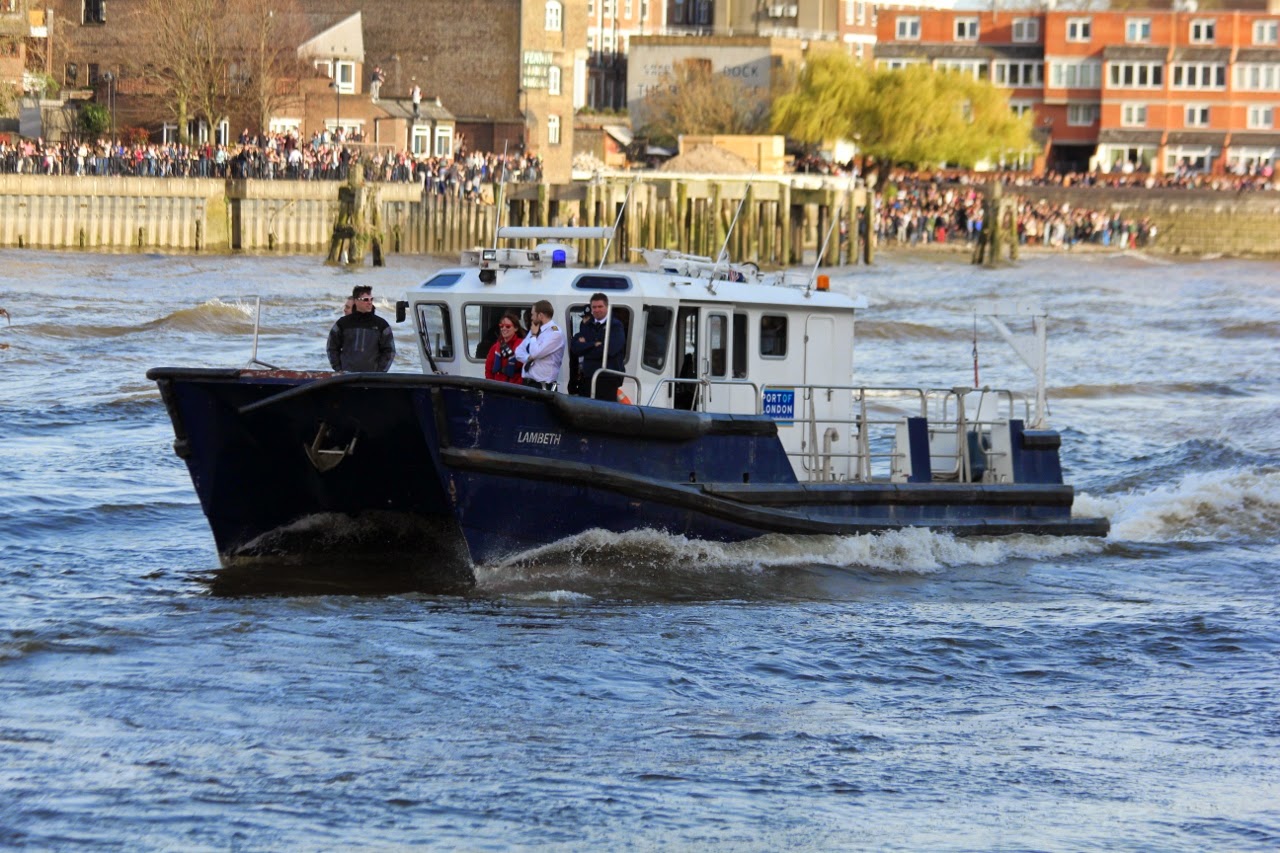 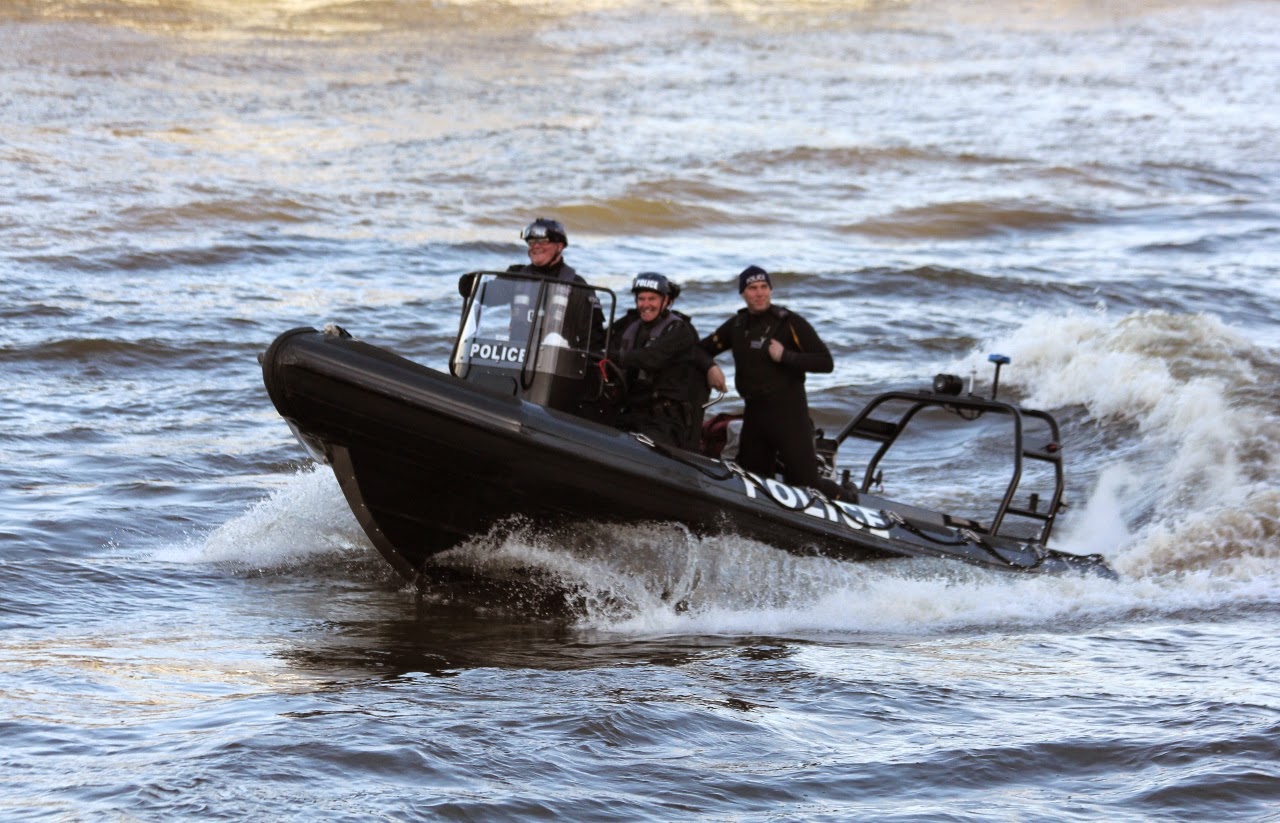 So here are a couple of photos of the Women's Boat Race, two of each boat.

Alas Oxford were already so much ahead it was hard to get both in the same frame, though you can see their wake in the Cambridge boat's pictures.

So Cambridge were literally left in the wake of Oxford :( 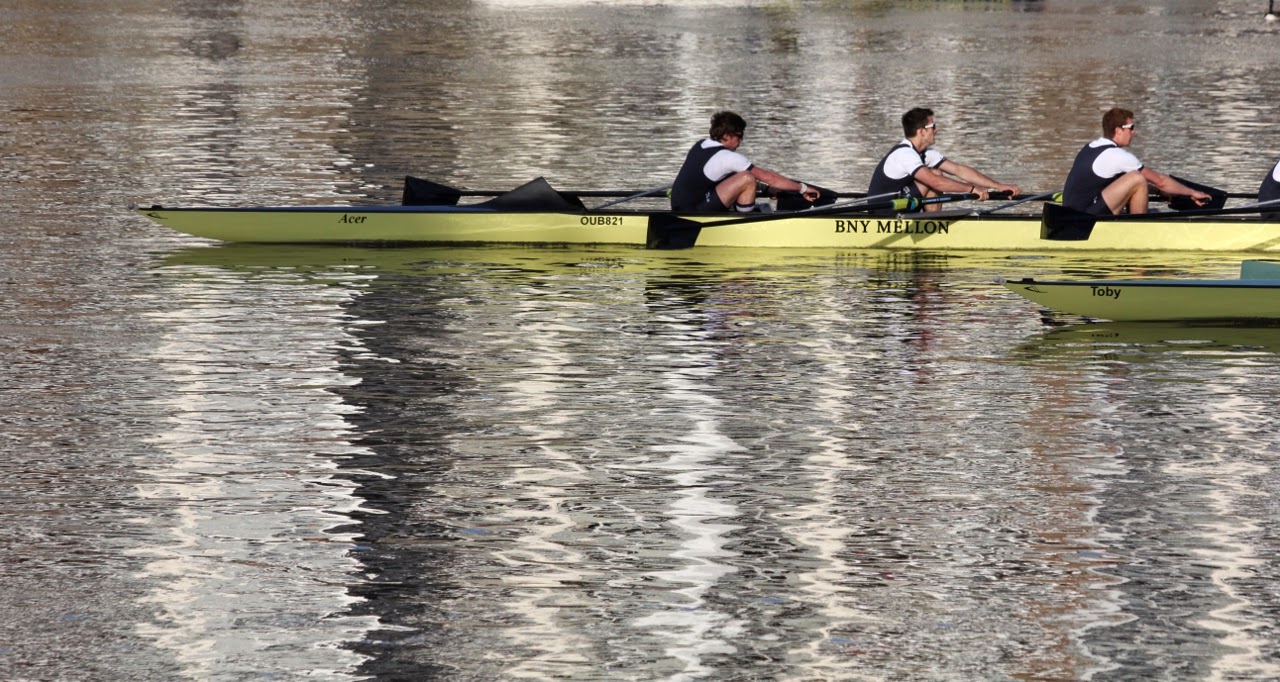 These are from the men's race which was close enough to get both boats in the same frame. Alas the women's wasn't but I'll post some of those tomorrow. 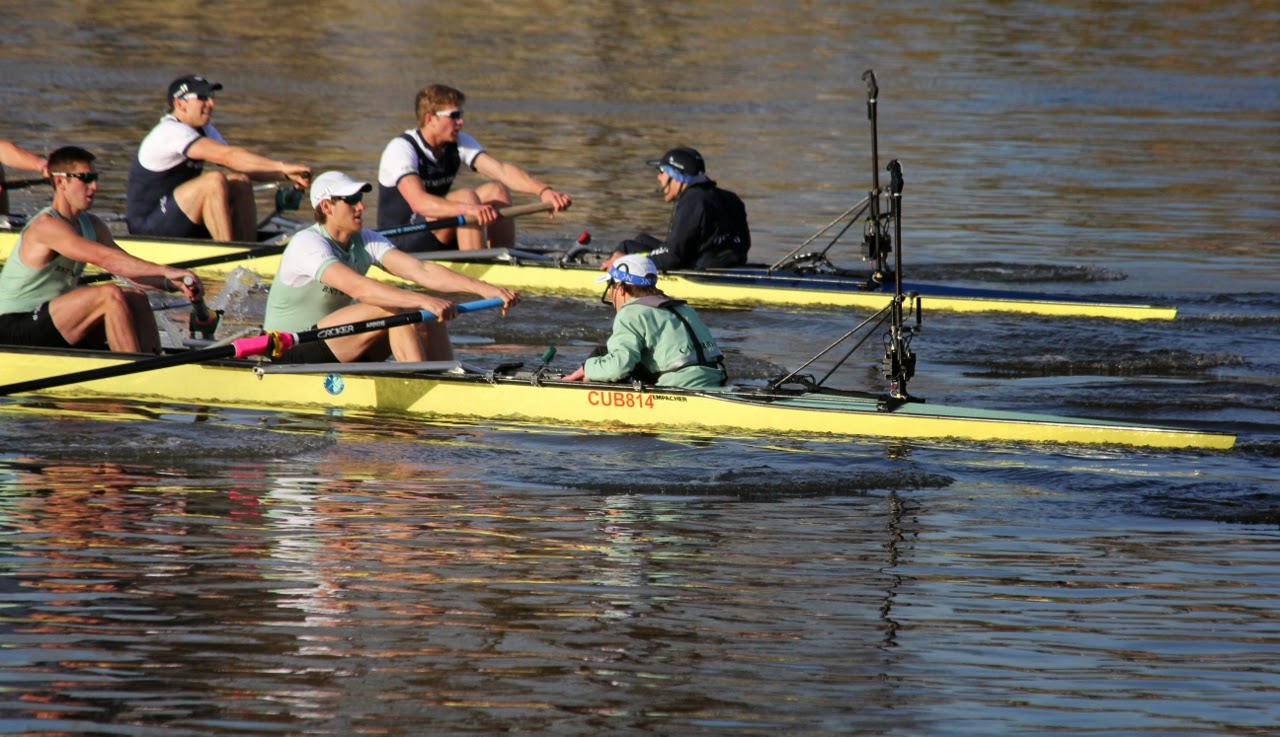 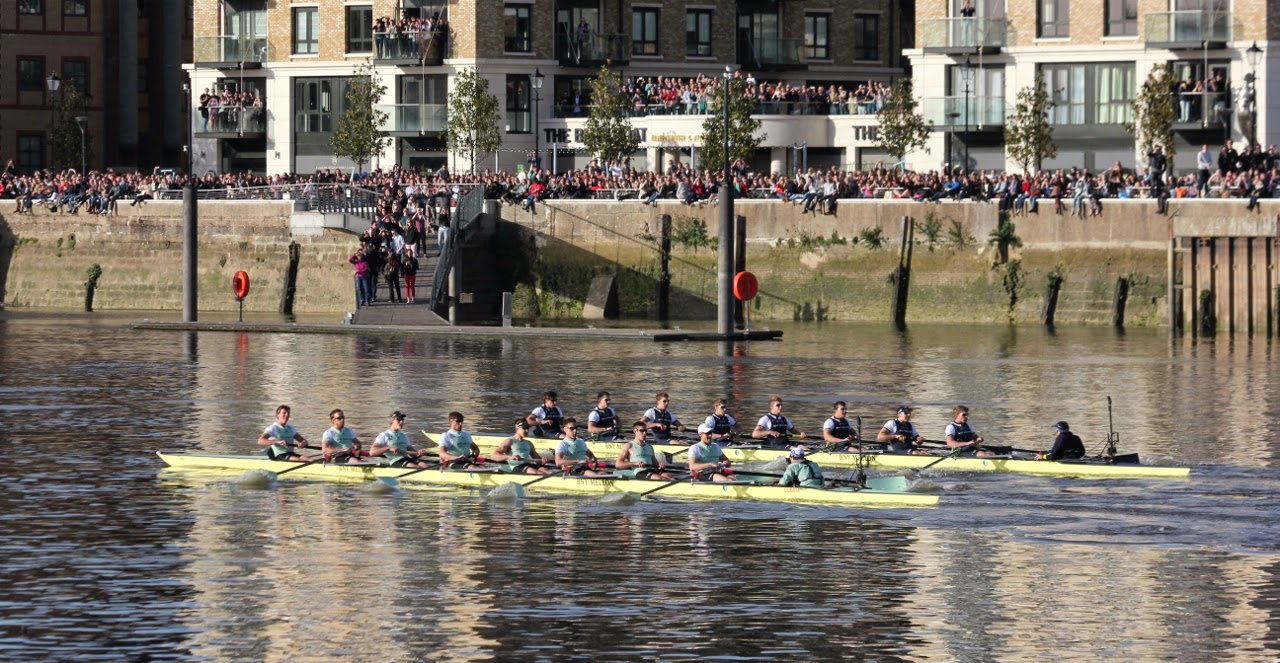 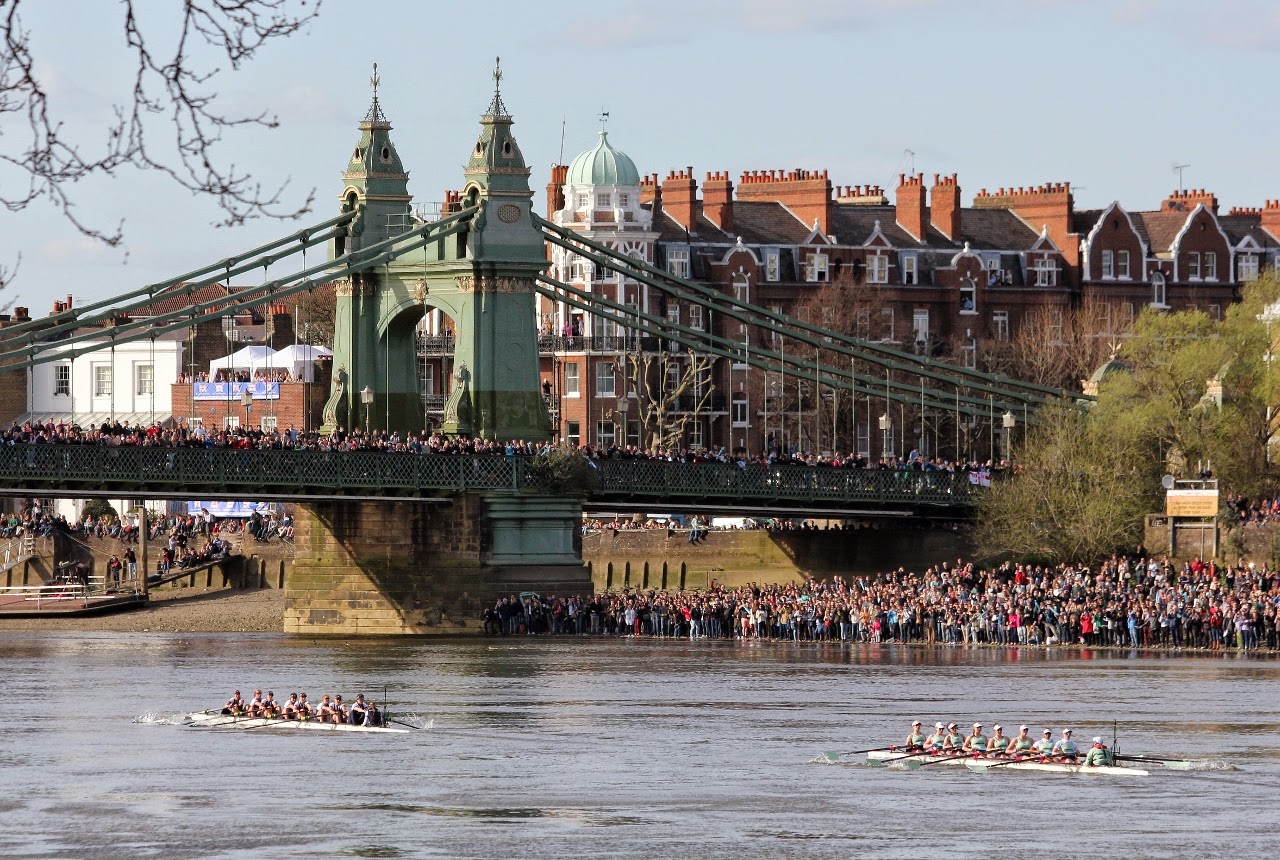 This year the Boat Races became plural as both the women and men of Cambridge and Oxford competed their rowing eights along the tidal Thames.

It is so obvious that this is the right and fair thing to do that it seems strange it didn't happen until 2015.

Above is the Oxford women's boat pulling away from Cambridge at Hammersmith Bridge.

I've been pretty busy recently so haven't had much time for blogging but was very impressed by this expedition yacht, just right for high latitude (or even lower latitude) sailing.

All I need are money, time and crew... so alas must remain a dream.