Death in the Ice at the NMM 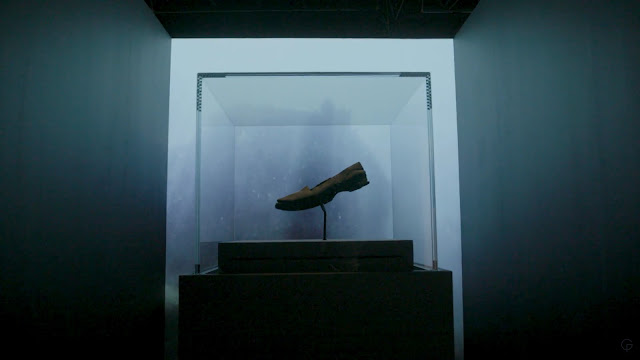 Death in the Ice is an exhibition currently on at the National Maritime Museum (NMM) about Franklin's lost expedition to find the North-West Passage.

The expedition set sail in 1845 with two ships, HMS Erebus and HMS Terror and 129 men: all were lost.

At first they just vanished, last seen by some whalers sailing west, and then nothing was heard for years and years. Expeditions were sent to rescue them, then when hope was lost, to discover the truth about their fate. In the last few years the ships themselves have been found, sunk in icy waters.

This brilliant exhibition considers this tragedy from many angles. It starts with a description of the land and its people, the Inuit. It is remarkable how much of the story of the Franklin expedition was recorded in their oral history, and shaming how little it was believed by Victorian Britain.

One artifact on display was this Inuit model of a European ship, the wood it was made from no doubt drifted from outside those treeless wastes: 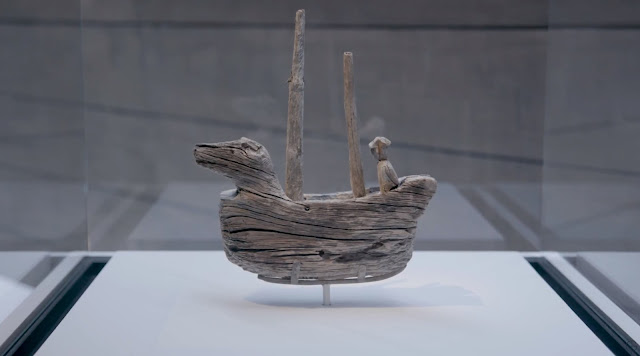 Note this photo, like all images on this post, comes from the NMM web site as it was one of those "no photography allowed" exhibitions.

After the scene has been set there is a description of the British view, from Frankenstein to the art work showing explorer's ships battling mountains of ice: 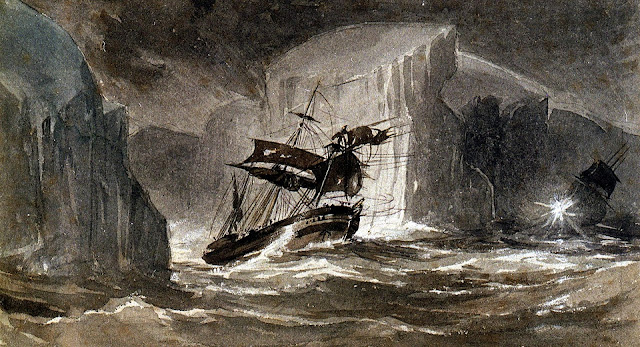 There was amazing video that showed the various expeditions and how they gradually revealed what has been called the Arctic Labyrinth:


There was then a description of life on-board the boats, with lots of artefacts, the rescue missions and Franklin's wife Jane's exertions to find them.

Alas what they discovered was too much for Victorian Britain, and the tales of cannibalism considered so horrible that none other than Charles Dickens slandered the explorer who repeated what the Inuit had told him.

Finally there was the discovery of the wrecks by the Canadians and some videos of dives plus the bell from the Erebus.

It was very moving to think of the possessions of the men, such as the shoe in the photo at the top, found in the wreck, kept unchanged by the icy waters.

Also, amazingly, many of the officers had had their photographs taken which were on display, so there was the feeling that they were not just names but real people.

It must have been a terrible end, stuck in the ice, tragically close to the break-though and achieving their goal of discovering the North-West passage.

Definitely worth a visit: on in Greenwich until 7th January 2018. 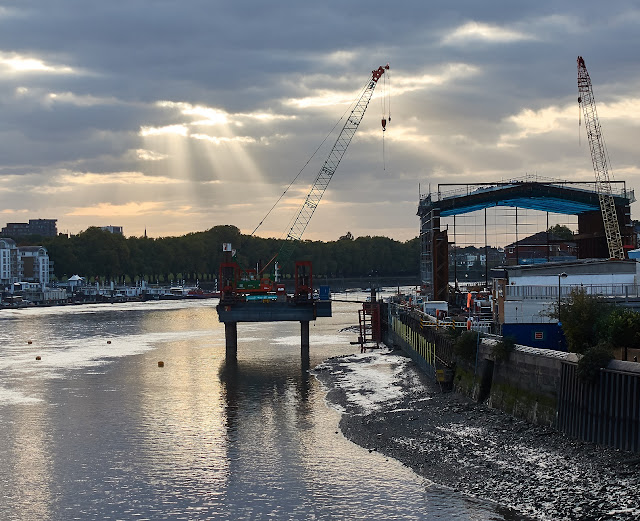 I've blogged before about the Thames Tideway Tunnel, aka the Super Sewer, and at the time of those posts it was mostly in the planning stage, with debates about where the access sites should be.

This proved controversial - for example the one planned in Putney at Barn Elms was strongly objected to (including by round the world sailor Tracy Edwards) and so another site in Fulham was chosen instead.

Now work is progressing rapidly and there was an open day at the Carnwath Road site where you could have a look round and talk to engineers.

The most visible sign of progress is the huge "acoustic shed" (top and bottom pics, before cladding was put on) which is designed to keep the noise down when drilling gets serious to allow 24 hour operation. Within it will be a shaft down which the tunnel boring machine (TBM) will be lowered.

This can be seen in the model below: the real thing is 150m long with 8m diameter head, part of a set of TBMs to drill the 25km of tunnelling required: 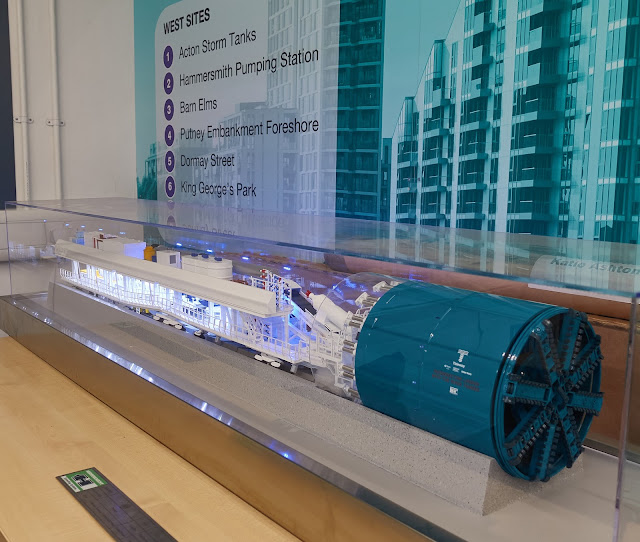 This will generate a lot of waste and rather than hammering the local roads will be taken out by boat with two new tugs on order called Felix and Christian to handle the lighters from the Fulham site.

When the work is complete there'll be a small public park where the shaft end of the acoustic shed is at the moment plus the quay side for the lighters will remain as a protected wharf.

I'm looking forward to seeing how the works progresses! 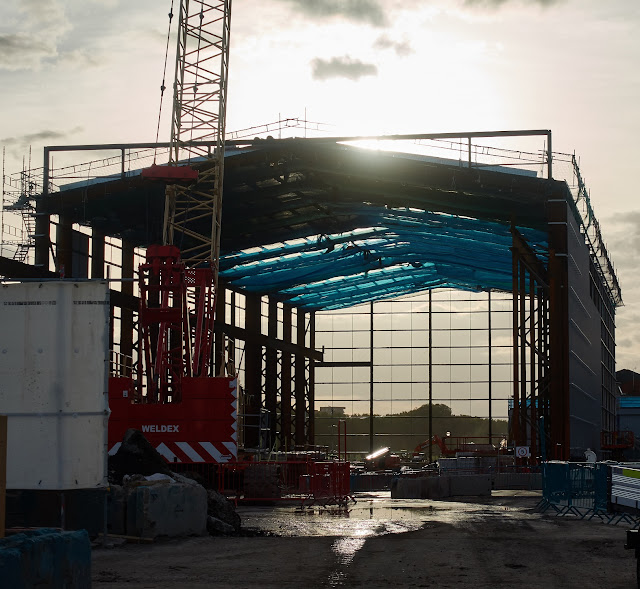 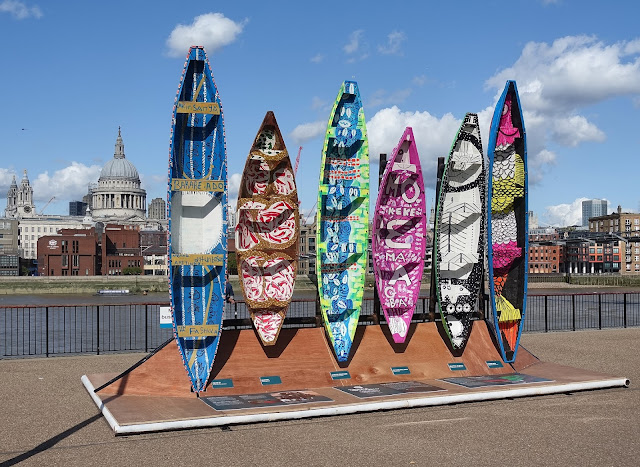 As part of the Totally Thames festival, there was this installation called "Five Cowries Flotilla" outside the Tate Modern.

Initially it was a bit confusing, given that there were, after all, six of them.

But apparently the name relates to the Five Cowries Creek in Lagos, which is where the artist Polly Alakija got the inspiration. The traditional fishing craft were painted by school children there and then brought to London.

Very colourful they were too!

Email ThisBlogThis!Share to TwitterShare to FacebookShare to Pinterest
Labels: kayak

Dolphin visiting the Thames in London! 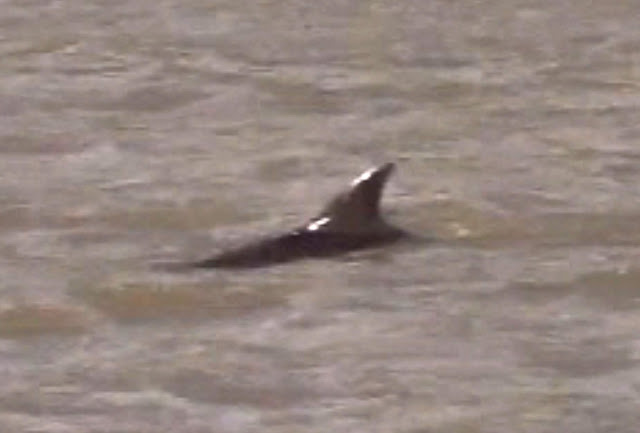 There's been a lot of excitement in London recently at the repeated sightings of a dolphin (or maybe porpoise) far up the Thames, reaching up to Richmond!

Its been seen on several days and on Sunday was in the Putney area and I managed to see it and shot a short very jerky and blurry video of which the above frame is one of the better ones.

News reports suggest that this could be a good thing - as in its come in search of fish - rather than a bad thing it being in distress.

Anyway, worth looking out at the river to see if you can see its fin passing by! 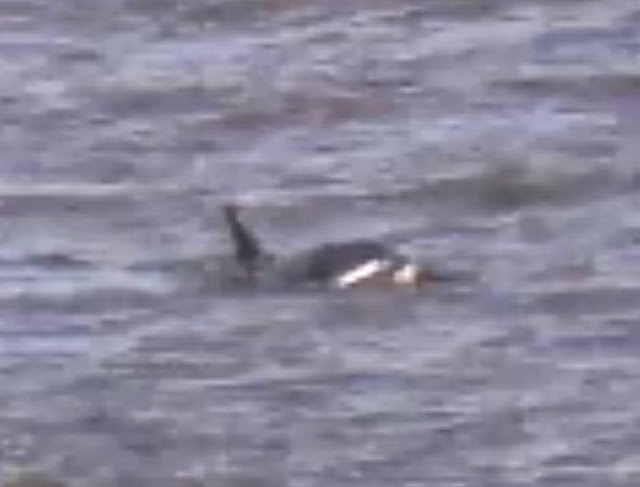 Updated: alas this story has a sad end.