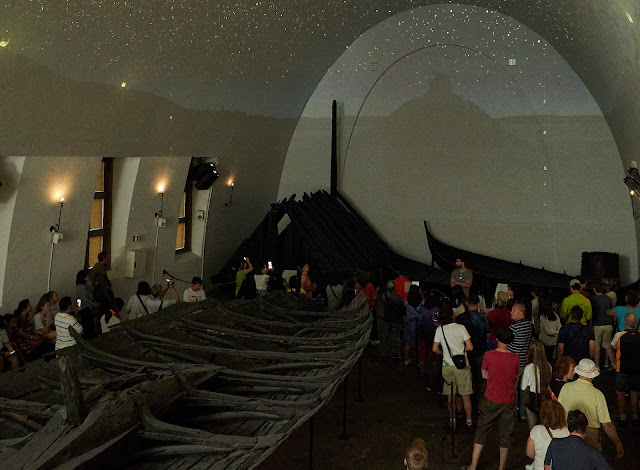 There's an interesting article in the Times today about research into the Viking Tune ship, above, in the Oslo Museum (as visited on my way up to Svalbard).

Apparently recently it has been identified was an especially fast vessel, with significantly larger rig than would be expected for its length, and particularly sea-worthy. However, as the article puts it:

Norwegian archaeologists had missed the significance of the boat because “they didn’t actually talk to people who knew boats and ships”. In contrast, [Dr Paasche] sails and is in touch with traditional Norwegian boatbuilders.

They should have talked to the sailors!

I have thought that before. Archaeologists seem obsessed in seeing religious significance in everything - no doubt future archaeologists will write articles about the religions of London involving worshipping of the gods Arsenal, Chelsea, Fulham and all.

So when they find evidence of a causeway near Vauxhall into the Thames of course its a religious site. The fact that the location is the highest point that the Thames was tidal (at the time) and hence could alternatively be a trading site, where boats would be able to take produce up and down is ignored.

The role of trade in driving humanities history of the oceans is the subject of the book "The Boundless Sea" by David Abulafia which is in my to-read pile of books, though it is dauntingly fat, heavy, long (over a 1,000 pages) and uses a small font.

Archaeologists aren't the only ones who don't seem to get sailing. I remember seeing this painting of a wave by August Strindberg at the Tate Exhibition on that artist: 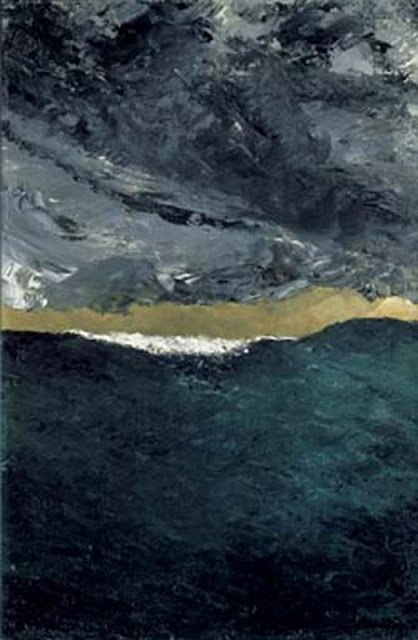 In the blub around this painting, called "The Wave" (obv.) the museum described the fear the wave brings.

But to me it reminds me of sailing offshore where the wave, if coming from astern, means in a few seconds time the yacht will be surfing down its edge. So the emotions are (also) anticipation and excitement at the thrill to come.

Given one of the Strindberg's themes is the creative process, those emotions are as important if not more so than fear.

I'm guessing the museum curators are not sailors, and have not surfed a yacht down waves like those.
But Strindberg would have, as he travelled a lot by boat across the Stockholm archipelago.

The Tate too should have talked to some sailors. 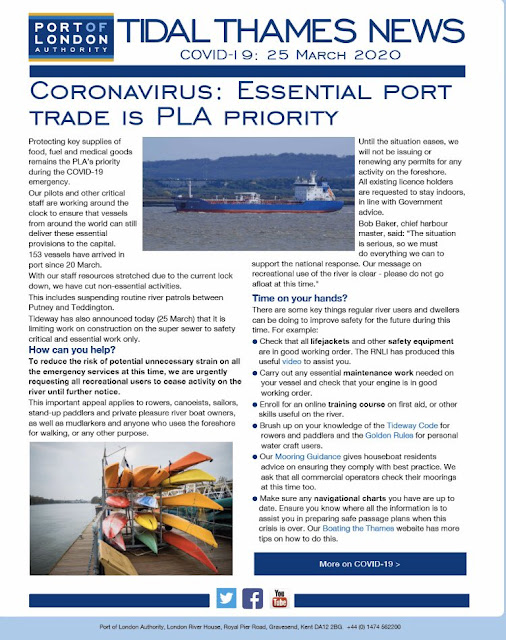 The Thames is serene and quiet. Water is flat and reflections are sharp. The only sounds are the cries of seagulls and squawks of coots.

Due to the lock-down, all sorts of traffic on the tidal Thames in London has been cancelled. There are no Thames Clippers, zooming up and down, the Thames Tideway Tunnel has stopped drilling (at least in my local site) and pleasure boats are recommended not to venture out (see PLA advice above).

I have seen a couple of kayakers but I've noticed they have been stopped by the PLA. Not sure what has been said (too far away) but I'm guessing its on the lines of the message above: don't put yourself or the lifeboat crews at risk.

This is really not a good time to require a trip to A&E.