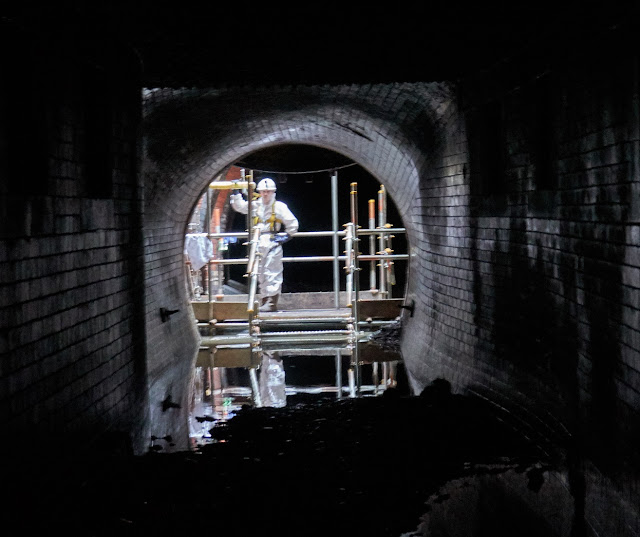 In case you're wondering, no you haven't been missing LHD all those years as its the first ever, and no its not been thought up by some PR company but rather a poll of the great British public.

Given my recent trip down the sewers there could be only be one topic to cover, and fortunately the Thames Water event included a very interesting talk by Ben Nithsdale on this very subject.

Very informative it was too. For example, I didn't realise that historically the word sewer didn't mean transport of human waste but a means of land drainage e.g. of rain water. And that was the case for those old Greek and Roman stone piping in the streets (plus those storm drains that The Terminator sped down on a motorbike).

In ye olde London water was expensive and delivered mostly by cart or even buckets while the waste (as I shall call it) was simply tipped into the streets. People got fed up with this but given the technology of the day (1388) the solution was just to hire men with rakes.

However in 1580 piped water was provided to streets of the City pumped via a water mill on the north end of London Bridge and this was followed by other schemes, typically using wooden drilled pipes that only ran for a few hours a week. They leaked a lot and so were unpressurised and laid along the street by the curb.

Henry VIII, when not distracted by his complex marriage affairs, was instrumental in the development of the sewers by giving commissions the right to dig sewers where they needed. These were for drainage and clean water and at this time the Thames would have been drinkable and full of fish - hence Billingsgate Market located on the riverbank in the City.

Human waste, instead of going into the street, was increasingly held in cesspits, but these tended to overflow, often into sewers, which was illegal. Water consumption rocketed as wooden pipes were replaced by iron ones, which could be pressurised and transport water from far outside the capital.

But as London boomed in 1815, the year Napoleon was defeated at Waterloo, there was another dramatic change, as it became legal to pipe waste into the sewers, which in a few years become overloaded and filthy.

Famously, the artist John Martin foresaw that with the rapid increase in London's population this would require engineering to solve but he was to be ignored. It wasn't until politicians themselves were driven from Westminster by the Great Stink of 1858 that it was decided that Something Had To Be Done.

And so it was that Bazalgette started designing the great combined sewage system, that included the magnificent Abbey Mills Pumping Station: 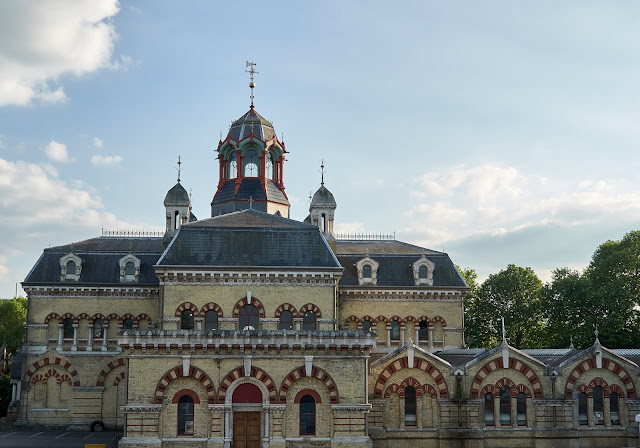 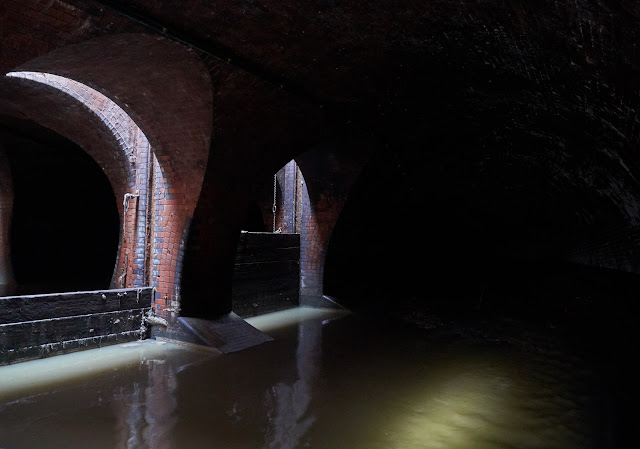 Regular readers will be well aware of my fascination with the life of John Martin, his pioneering work on London's sewer system, how it was taken up by Bazalgette in the great Victorian engineering project encapsulated by the wonderful Grade 1 Listed Crossness Pumping Station.

Readers might also have also spotted my interest in London Under, from Brunel's Thames Tunnel to disused tube stations and canal tunnels to the lost rivers of London.

So hopefully it will be at least partially understandable that high on my list of places to visit in London would be Bazalgette's magnificent sewers.

It was therefore with great excitement that I received an invite from Thames Water for just such a tour.

We started off at the Grade II listed Abbey Mills pumping station, which was once known as the "mosque in the marshes" due to its elegant dome at the top: 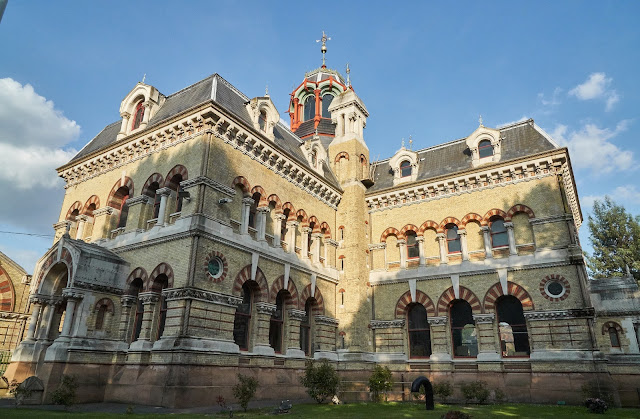 Inside there is much of the original metal work, but unlike Crossness this pumping station has been continually in operation, so there are also more modern pumps filling its cavernous spaces: 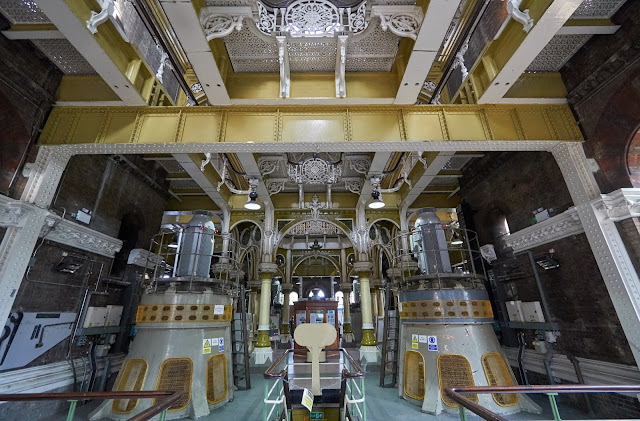 We were given an extremely interesting history of how London managed its water supply and, er, corresponding wastage (to put it delicately). There was also an update on the famous Thames Tideway Tunnel aka the Super Sewer, more of which anon, including what will happen to the Bubbler.

The tour then showed us the site's main buildings and their history. There used to be two tall chimneys but they had to be demolished in the Blitz because of concerns that if they were damaged they might fall on the pumping station itself.

Then it was time to get dressed up for the descent into London under and the sewers. The outfit made us all feel a bit like the Ghostbusters - who are you going call? - very comprehensively covered, with not just one but two gloves, which to be honest made operating the camera a bit frustrating.

Anyhow managed to get a few shots with approximately the right settings: 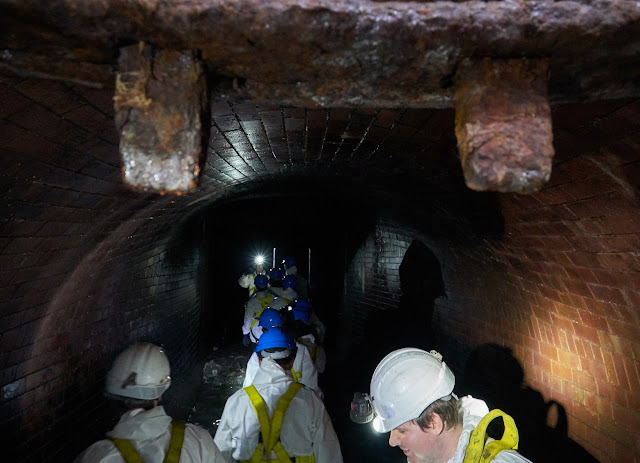 I'm sure you're wondering about the smell but it really wasn't that bad. They'd lowered the water level but we still to wade through a foot or two of brown water, and it wasn't just Thames mud giving it its colour I'm sure. So we were all very incentivised not to fall over or in.

Our guide showed us the Bazalgette original brick work (top photo), looking good after about 150 years and still doing its job to keep the dirty stuff out of the Thames. We also got a lesson in what not to flush down the drain, complete with examples.

More on all of this later, as there was lots of really interesting information provided over the afternoon and I have a stack of photos and videos to, er, wade through.

Many thanks to Thames Water for arranging the tour. 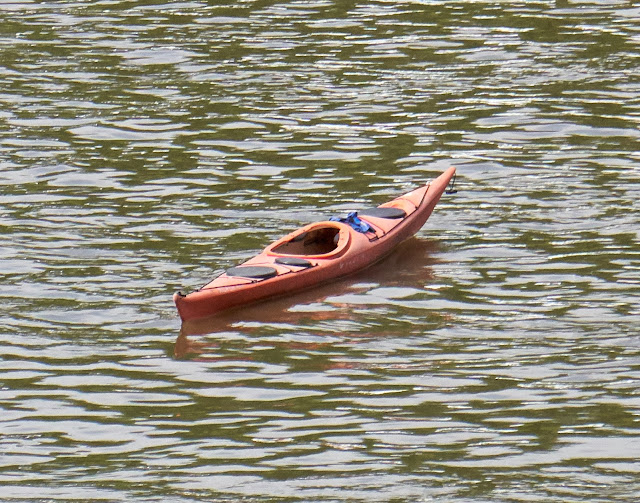 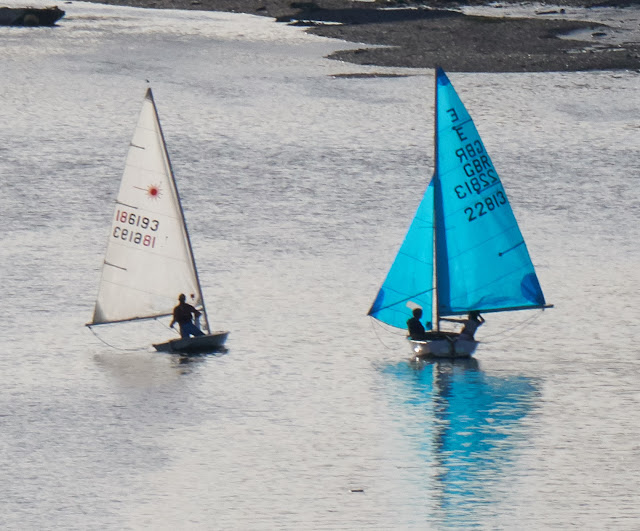 The weather has finally warmed up and the boats are out on the Thames.

All it needs now is for my workload to decrease! 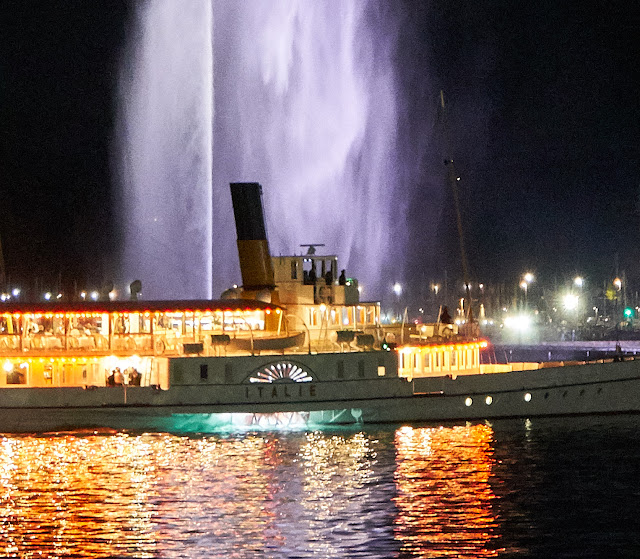 I have previously posted comments about paddle steamers, the authentic and the total fakes.

On Lake Geneva there is, fortunately, a lovely "Belle Epoque" fleet of side paddle boats, such as the Italie, seen here up by the famous Jet d'Eau: 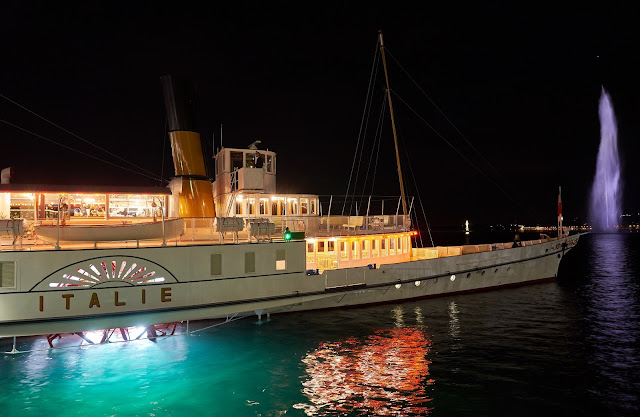 Alas I was working far to hard to go for a trip (or alternatively investigate the D35 cats racing out on the Lake) but it made a nice distraction when going for a walk or jog. 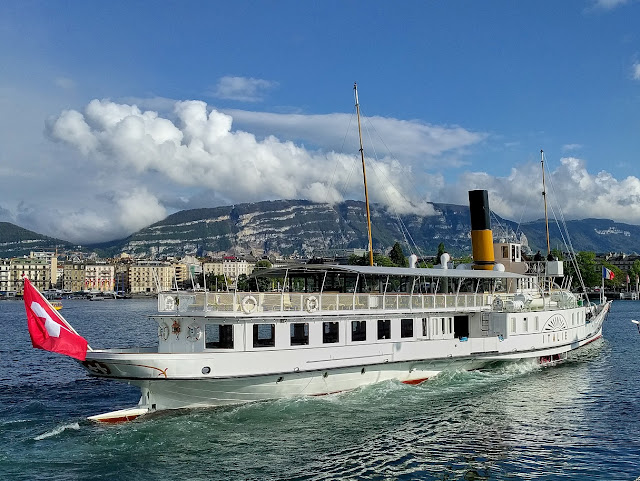 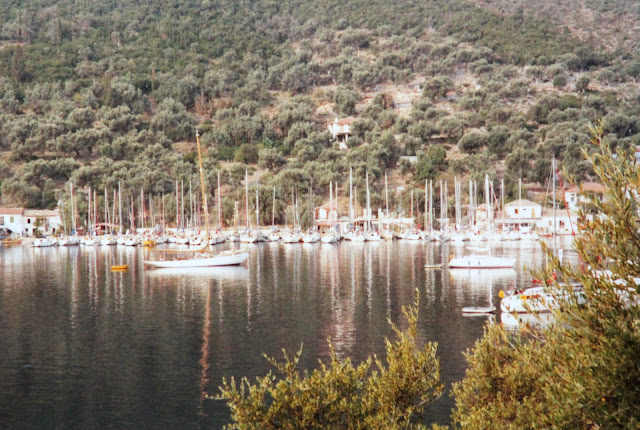 Ok, enough May the fourth misquotes, but many years ago I signed up for something called Villa-Flotilla holiday where the first week involved teaching newbies how to sail a yacht and the second off we'd go.

It was for a sailing company that is now long gone but others still sail from where it was based, namely Nidri on the Greek island of Lefkas (Lefkada).

I'd never been on a yacht before but was keen to find out more from our instructor, on who we relied to teach us the mysteries of sailing.

Unfortunately the first thing he did was run our yacht aground just outside Nidri! So the first topic of my first sailing lesson was how to kedge off. Fortunately I haven't had to use this technique since but no doubt it was useful to know.

The second lesson was the all important person over-board drill. Most courses simulate a body by tying a fender to a bucket then chucking it into the waters, but our instructor was a bit more ambitious in that he jumped over-board himself.

I do wonder what would have happened if we had been poor students at that task.

Later I was to learn other important things, such as why it was a bad idea to crash-gybe in front of an oncoming Greek ferry, but that's another story. 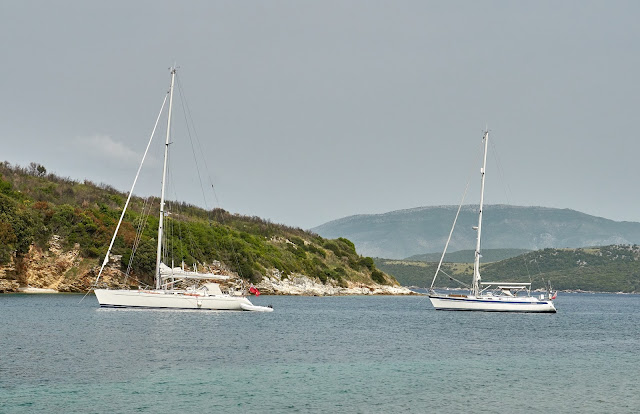 From a flying visit last weekend. Many, many years ago I did a villa-flotilla on nearby Lefkada which might be worth a post. 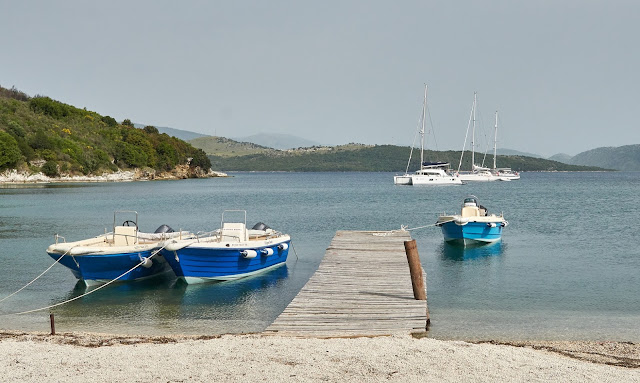 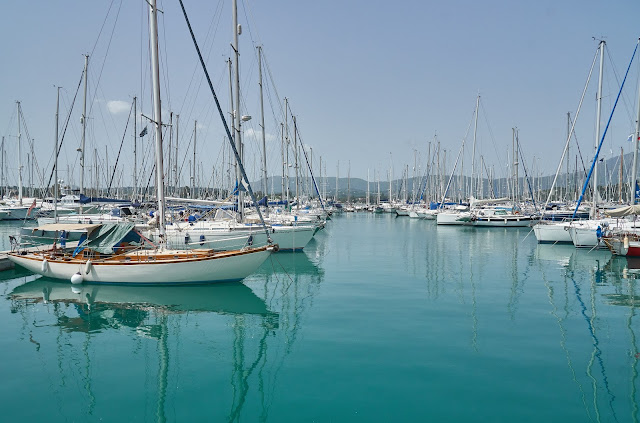