The SPECTRE of a blog anniversary 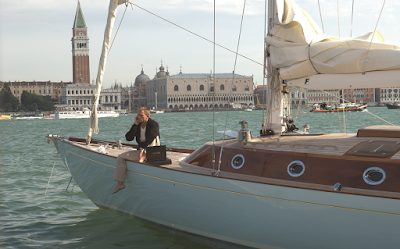 For another year has flown by and it time for yet another blog anniversary, with a whole decade of posting that have come and gone since the first went live.

But rather than sailing I've been to the movies and you can guess what I saw. Good fun it was too, and I  discovered that a race up the Thames is even better at night than daytime - golly the old smoke was looking good.

And you can get your hands on a bit of genuine Bond sailing legend, as the Spirit 54 Soufrière that stared in Casino Royal (above) is for sale!

But who knows? 10 years ago I had no idea one day I'd sail double handed to the Arctic Circle or race in the 100th anniversary of the Square Metre Rule.

So here's hoping to "Sail Another Day"... 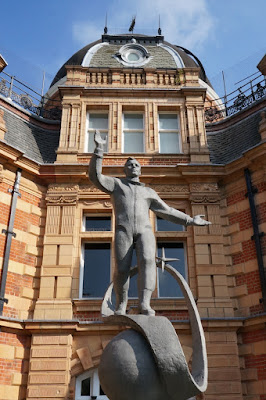 How does this photo connect the last two blog posts and in particular what you'd find inside?
Posted by JP at 1:10 pm 5 comments:

Three planets and the Cosmonauts 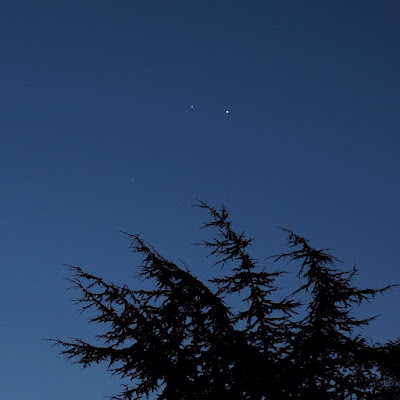 This morning I got up at 05:30 to do a spot of astronomy. It wasn't as bad as it sounds thanks to the hour change, so in BST it would be the more reasonable 06:30.

The light was rather beautiful and I had just a handful of early rising birds for company.

The reason for heading out into the cold was the conjunction in the morning eastern sky of Venus, Jupiter and Mars, making a clear and bright triangle: 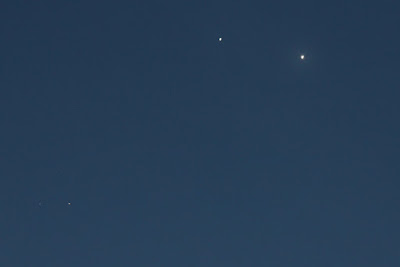 There's a nice little gif identifying each and describing their motion to be found here.

There's more space in London at the moment with a superb exhibition of early Soviet / Russian space technology in "Cosmonauts" at the Science Museum:

It was all rather brilliant, with lots of fantastic real engineering, such as Valentina Tereshkova's Vostok 6 capsule. The only downside was KGB levels of scrutiny to ensure that no photos were taken - apparently there were items on display that had to be specially declassified.

Well worth looking up in the night's sky if you have a cloud-free morning or visiting the Cosmonauts if you're in London.

JP's trip to Greenwich - in video!! 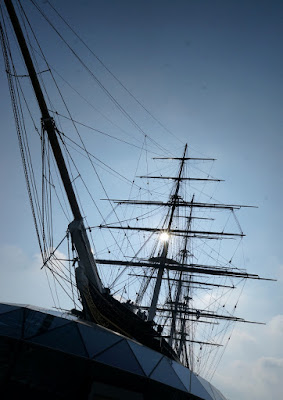 Recently JP returned to Greenwich, taking his camera with him, and you can see (above and below) two of the photos taken. 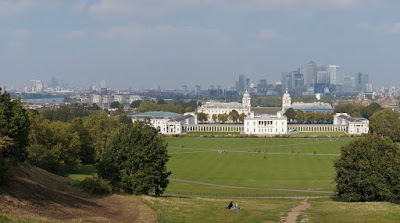 But what about videos, you might (possibly) be asking? When are we going to see S/V Delos style YouTube clips? And why not start by recording this, the historic maritime heart of London?

Fortunately there is already a video that captures JP's visit if you are prepared to make a few, very minor, mental editorials as you watch it, starting with the gender and age of those involved plus the additional points listed below.

Note that:
Hmmm.... maybe this approach to videos isn't such a good idea after all.

Keeping plastics out of the Thames

Boo to plastics!! Polluting our rivers and seas!!! Bad plastics!!

But what to do?

The Port of London Authority (PLA) and Thames 21 (as in the Beverley Brook gun incident) have been working together to remove the rubbish from the river for years, but it still keeps on coming.

So they put together this video presented by explorer Paul Rose as part of their "Do the right thing" Cleaner Thames campaign.

Coincidently I was actually in Greenwich while this video was being shot and saw Paul out on the PLA boat. So I kept looking for myself in the background walking along the Thames path, but with no success.

Which Greenwich trip, you might be asking? Was any other video taken?

Gloriana and other classic boats 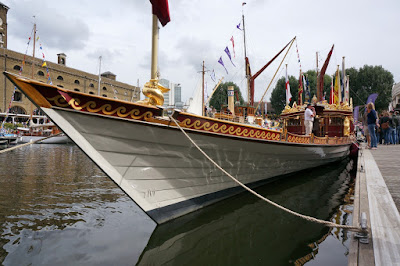 Yesterday's post of a fancy painted rudder was, as Tillerman correctly identified, that of the royal barge, Gloriana.

There were many other fancy and classic boats on display at St. Katharine Dock back in September as part of Totally Thames. 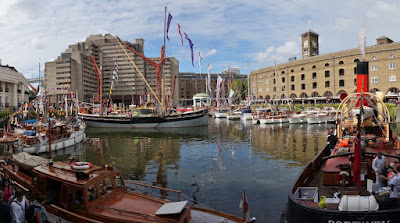 Tugs, yachts, barges and lots and lots of bunting.

I also had a good catch up with Alasdair of the Sumara of Weymouth blog with a stand for Arthur Beale, central London's specialist ship's chandler. 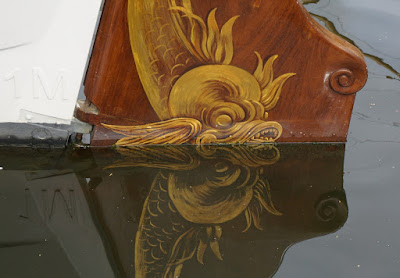 This is the rudder of a boat that is often seen on the Thames which frequent readers will know.

Any guesses as to which it is?

Whaler on the Thames 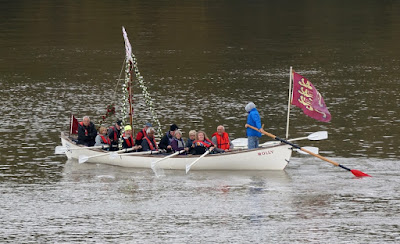 I'm a bit behind in blogging having been off sick for a few weeks. A lot of that time was spent staring out of the window watching the boats go by.

One of the more interesting ones was this whaler - the Henley Whaler's Molly, as can be read about here.

As can be seen, it's double ended and has a small mast, useful to handle the range of conditions that whale hunting would require.

Now of course the Thames is usually whale free (though there have been the occasional visit as far as Battersea) but Molly participates in events such as the Great River Race as well as special occasions such as the Royal Jubilee and Olympic Touch processions.