Seven is a magic number 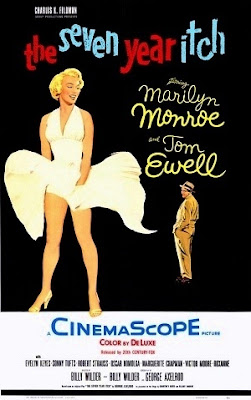 Well Sassi and I decided to throw ol' JP a party to celebrate his blog's 7th birthday but he's no fun at all going on about how's its not right given the mess Sandy's made and anyhow he's got to work.

What a party pooper!! But Sassi and I decided to have one anyhow-

Hi guys, Sassi here! To be honest its a bit of a washout with just Buff and his beer cans (what no cocktails?) so I'm off!! Luv yah!!

-....oh, well it looks like its just me then. I had this whole speech about sailing more and working less but it can wait.

I'll just have to put my feet up and watch a moovie!

This is Buff Staysail, the one man party, over and out!

This photo (from here) was taken a few years ago in heavy seas on the replica HMS Bounty, currently lost at sea out in hurricane Sandy.

Good luck to all those on the US Eastern coastline - and keep safe.
Posted by JP at 4:18 pm 8 comments:


Currently putting in 60+ hour weeks so not much time for blogging or indeed anything else but did find 4 minutes to fit in this video of the best bits of London 2012.

It brings back some good memories from this summer - in fact I might watch it just one more time before turning to the work laptop.
Posted by JP at 9:01 am 2 comments:

Buff says its curtains for AC72s 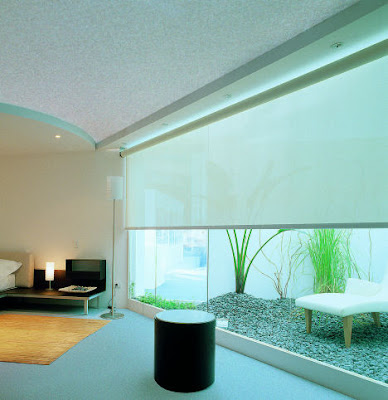 What a week its been for the America's Cup, with the biggest prang ever for an AC72 boat as Oracle 17 nose dived into oblivion out on those choppy waters of San Francisco Bay!

Can these beasts be ridden or are they destined to overpower the crews? Are even Olympic Gold Medallists up to the task or do they need the Buff-Meister's advice?

Yes, that's right, your's truly has the answer and it came to me as I was drawing the curtains at JP HQ early this morning (Ed:  the neighbours INSIST you remember the bathrobe!!)

It came to me in a flash - curtains! Or rather, should I say blinds!

These wing sail things are built with a thin skin over a skeleton but why should it be static: why not design the skin to be retractable? Split the wing into segments, each controlled separately and you could reef an AC72 wing!

When you find yourself in a bit of a blow and the foiling wing-sail cat is a bit over-powered & nose-heavy you could just wind in one or more sections of skin to leave bare carbon fibre. It would be like rolling in and out tin-foil!

This is Buff Staysail, without his bathrobe but with a vision, over and out!!


(With apologies to Tillerman)

It might be crazy but that's what makes it interesting. Pushing the edge of the ol' envelope on foiling carbon fibre wing sail big-cats, that's the bleeding edge technology for sailing in 2012.

And lets not forget it involves the likes of Jimmy Spithill, Ben Ainslie, Grant Dalton, Russell Coutts, and Tom Slingsby.


"Breaking things will be bad" - in this case a destroyed wing.

How many spare wings do you need to defend the America's Cup?
Posted by JP at 9:44 am No comments:


The latest video from the Oracle AC72 is pretty amazing but equally scary: the loads on this thing must be huge - just look at those hulls flexing.

And Ben Ainslie's been out there sailing them and he's reported back, emphasising again the need for a shore crew.

This is just after the row when with under a year to go the organisers turned round and told the competitors they'd have to cough up for shore based facilities. New Zealand's Dean Barker wasn't impressed and blogged about it (gosh, these bloggers eh?).

While I'm quite impressed with the high tech beasts it again highlights one of the worst sides of the AC, namely the extent to which success depends upon funding.

At least they are out there sailing, but no one really knows what's going to happen when they go head to head for real, except breaking things will be bad.

And very, very expensive.
Posted by JP at 9:06 pm No comments:

Bond and Ben on Saturday 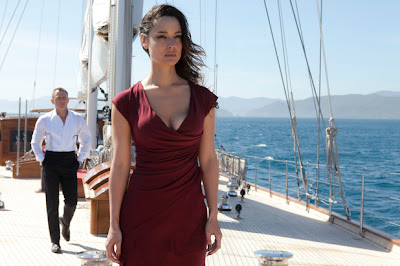 Ah, the joys of Saturday morning, when the alarm is switched off, the cappuccino machine is switched on and the newspapers are piled high.

And what do I discover but Bond, James Bond, on-board the luxury yacht Regina (above, from here) with Berenice Marhole, and the reviews of Skyfall are equally good looking.

Also in the papers was an interview with Ben Ainslie, talking about racing in the Olympics, sailing AC boats and his new girlfriend, Olympic sailing medallist Marit Bouwmeester below (from here): 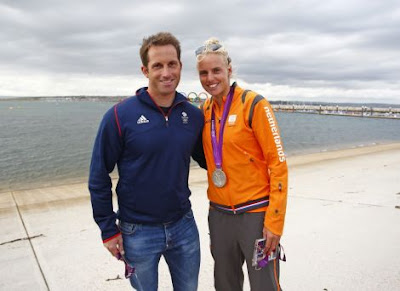 I do like Saturday mornings.
Posted by JP at 6:19 pm 2 comments: 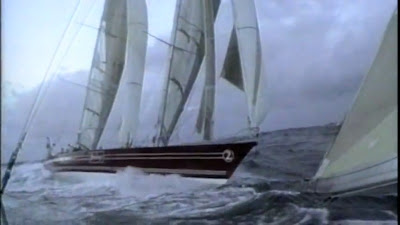 It's been a manic week work wise so it's very nice to be able to put my feet up, and what better way to start the weekend than this rather enjoyable documentary about the history of the Volvo Ocean Race aka the Whitbread.

It's all available on YouTube via this link here and you can watch Steinlager 2 (above) and co sail around the world in the dry, warm comfort of your own home.
Posted by JP at 8:46 pm No comments: 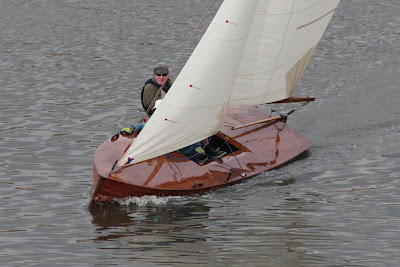 I was going to post a detailed description of tonight's GBBO (*) but this is meant to be a boating blog. Well, of sorts, anyhow.

Anyway I've just made myself some crepes in sympathy with this week's patisserie-themed semi (well, they're French, and yes still GBBO) and jolly good they were too.

To keep the boaties happy here is a well polished Holt designed boat sailing nicely along on Sunday.

I'd like to see James (the baker) make a boat shaped choux gateau with lots of chocolate, nuts, caramel and cream - yum! 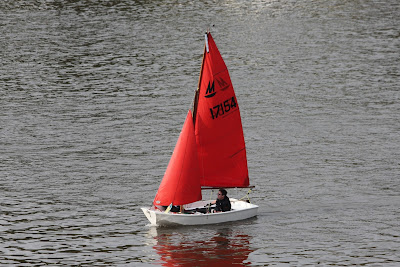 I had to work over the weekend, which was of course a bit of a bore, particularly as I kept getting distracted by these dinghies. Sailing down then up the Thames was a regatta of little boats - not the usual one design fleet but a range including some lovely old wood ones.

It was a race to commemorate the centenary of Jack Holt and appropriately it was organised by the Ranelagh Sailing Club on Putney Embankment.

Jack Holt was a prolific designer and builder and had to his name the following classics:


Here are just a few of his creations out where they should be, sailing on the Thames: 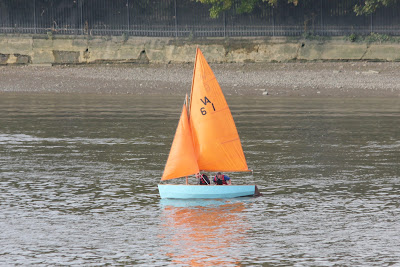 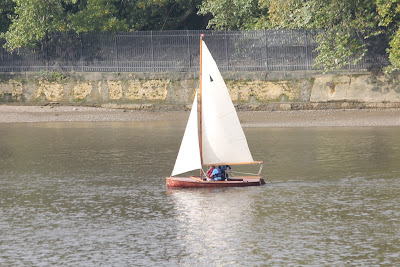 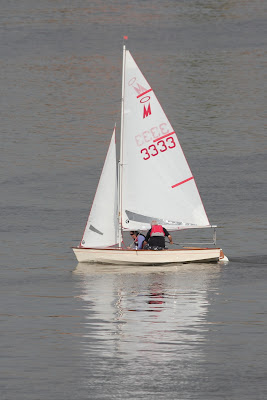 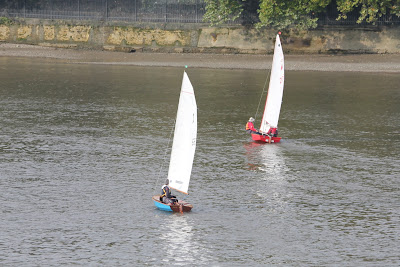 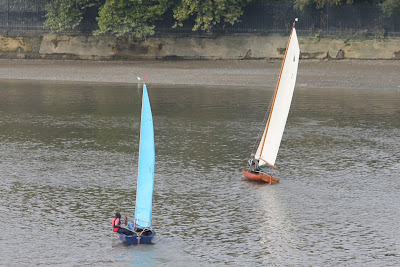 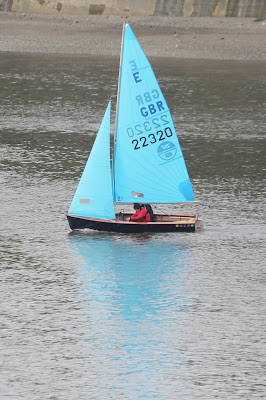 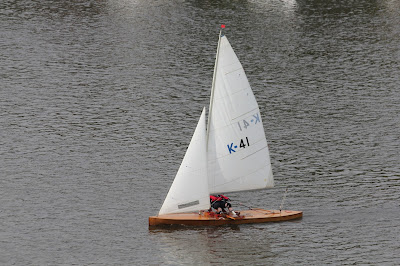 What is this and why is it a good day to post a picture of it?

GBBO and the ship's biscuit 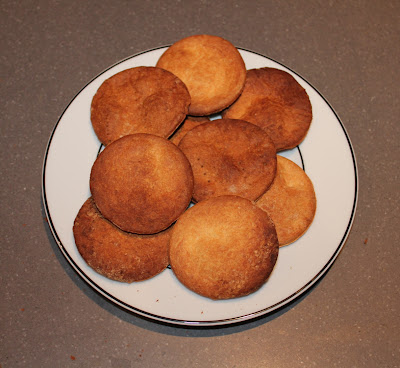 With work loads at press gang level highs I've been escaping into the gem that is the Great British Bake Off, or GBBO as it is known to fans and twitter.

For those that haven't seen the GBBO it's a BBC TV show that involves amateur bakers being whittled down by a series of challenges until one is crowned the winner. It is one of those rare programs that attracts a wide audience while being both super nice and hyper competitive - to say nothing of being packed with as many double entendres as the creations have calories.

One of the contestants has even created a drinking game on the lines that you must drink a finger every time someone uses phrase like "soggy bottom": you won't be surprised to find out he is a medical student (go James!)

Tuesday saw the departure of the lovely Cathryn with her dictionary of facial expressions, defeated by the humble biscuit. Ok, there might also have been an epic gingerbread self-build task, but the result was the same, namely tears and group hugs

So in her honour I had to get baking, and what better than the classic ship's biscuit.

Traditionally ship's biscuits was made from the minimal ingredients of flour, water and salt and the result tough enough to challenge both teeth and jaw to destruction. Having heard a colleague describe the dentistry required to fix a tooth that suffered a hairline fracture I was rather keen to avoid this.

In the end it was a case of seeing when they were going brown with one turn during the middle, which was just over 30 minutes. I did as instructed prick them with a fork but it turned out not enough as there were bubbles all over the place.

Pretty indestructible and nearly inedible, even with this "improved" recipe. Basically think of all the good things about a biscuit involving taste and texture, then take that away and replace with something with the texture of teak decking tasting burnt.

Dunking in tea made no difference - solid as a rock before and after. An experiment with dipping in rum (in the name of science you understand) was slightly more successful.

Lets just say its a good thing I halved the quantities and it could be argued that was still twice the amounts needed.

Verdict on the Biscuits

Bricks: I'd be reluctant to present these to either Mary Berry or Paul Hollywood in person though it would be quite entertaining to watch someone else volunteer them up.

Verdict on the Sailors that ate them

They must have been as tough as ship's biscuits.

Top tip for those thinking of baking them

Memories of the Nothe 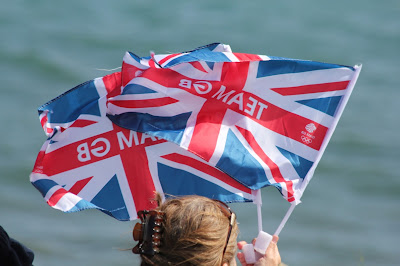 Recently Tillerman made a visit to the Nothe, home of the London 2012 Olympic sailing: I think he found it a bit quiet.

Unfortunately he missed out on what was a very special atmosphere, so here are a few photos to recapture the magical mood to be found there during the summer: 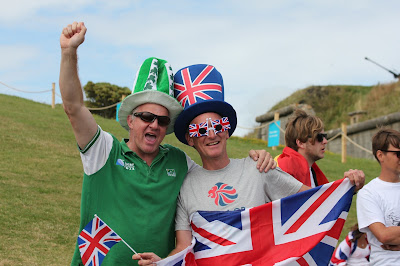 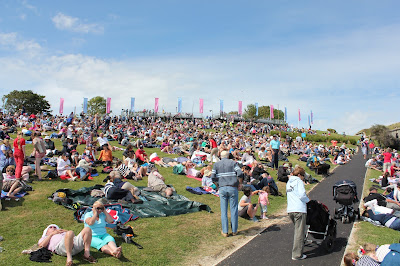 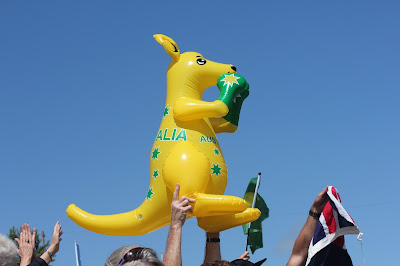 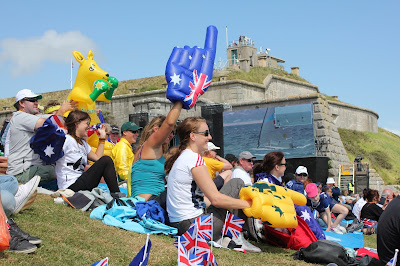 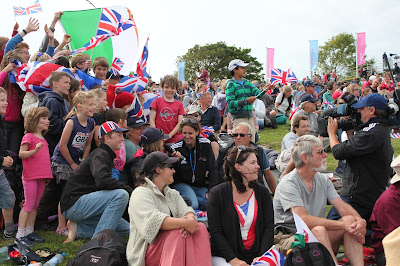 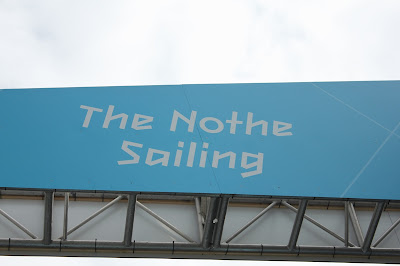