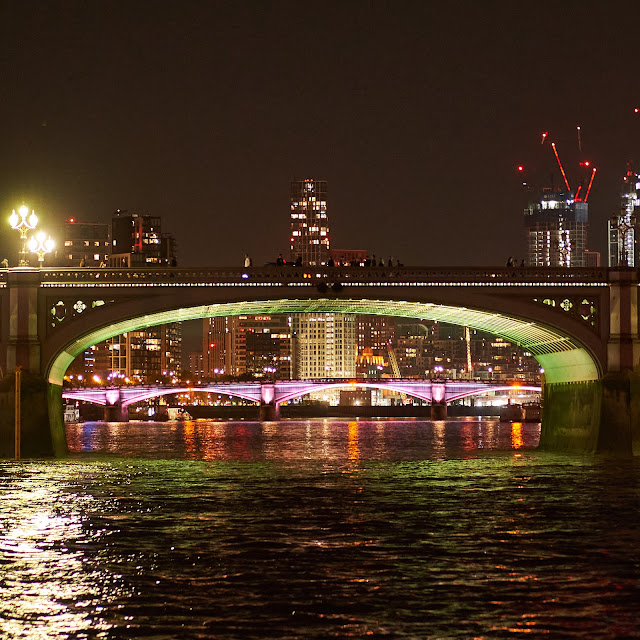 Over the last few years some of the bridges of London have been lit up as part of the Illuminated River installation.

Designed by New York based artist Leo Villareal, LED lights have been installed in 9 bridges of central London from London Bridge to Lambeth, together with controlling software. It is said to be the longest public artwork in the world.

On Friday, as part of the Totally Thames Festival, there was a special Thames Clipper tour of the river with commentary from project director Chris Waite and I went along.

It was a lovely evening, warm with clear skies, and we left from Tower Pier heading up river to Lambeth Bridge and the back down again. We learnt a lot about the project, and there was a lot more details to it than you might expect, from the engineering and abseiling required to install the equipment to the environmental angles, whereby lights could not point into the water to avoid confusing the fish.

The best bit was we could take photos from the front of the Thames Clipper boat and we're not usually allowed there, plus the moon was rising over the City: 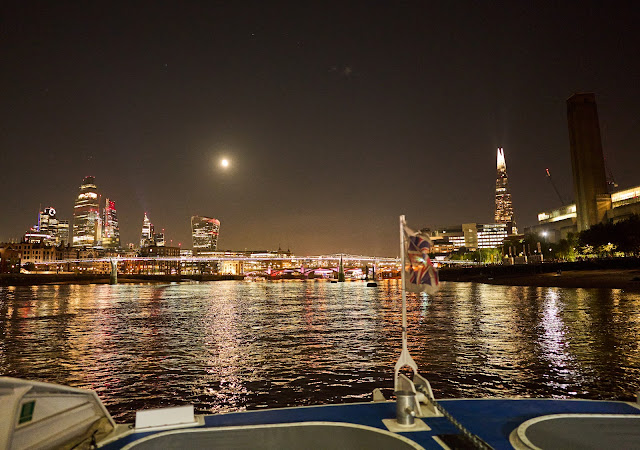 Must admit I did spend rather a long time admiring the view and not listening too closely, though I did catch a few phrases that sounded interesting such as "secret chamber within the Boudica statue" and "no one knew where the light controllers were, not even those in MI6".

The colours and pace of movement of the lights were carefully chosen. For example, the photo at the top shows Westminster and Lambeth bridges which are green and purple to reflect the colours of the benches in Westminster itself. Pedestrian bridges typically have faster moving changes than other bridges.

We went back down to Tower Bridge and then returned to Tower Pier. 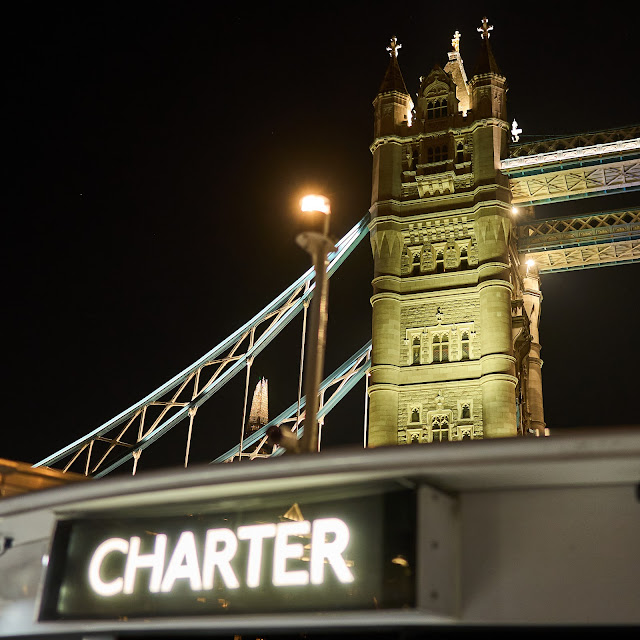 I stopped to have a chat with the project director while others disembarked. We were then all a bit surprised when the Thames Clipper boat without warning let loose its lines and headed out into the river.

But all was well as we ended up getting a short ferry ride over to City Pier, which was great for me as meant I could get an earlier train home.

The good thing about this art work is its available to all, for free. Just walk along the Thames path on either side in the evening after dark and admire the bridges.

But I do recommend seeing them from one of the Thames Clipper which has by far the best view.

Classic Boats on the Thames 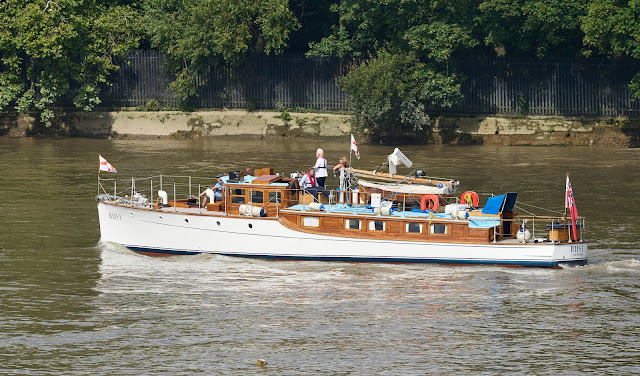 After the Classic Boat Festival at St Katharine Dock, as in the last post, the little ships dispersed, and a lot of them headed up river, so I managed to grab a few shots as they went. 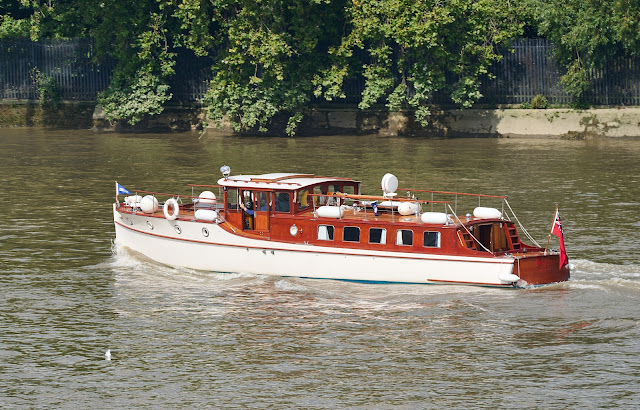 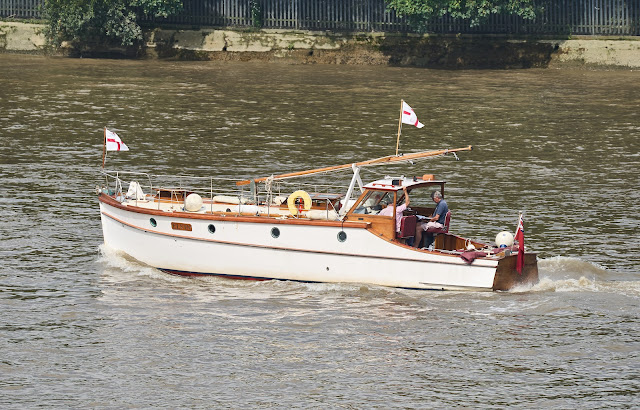 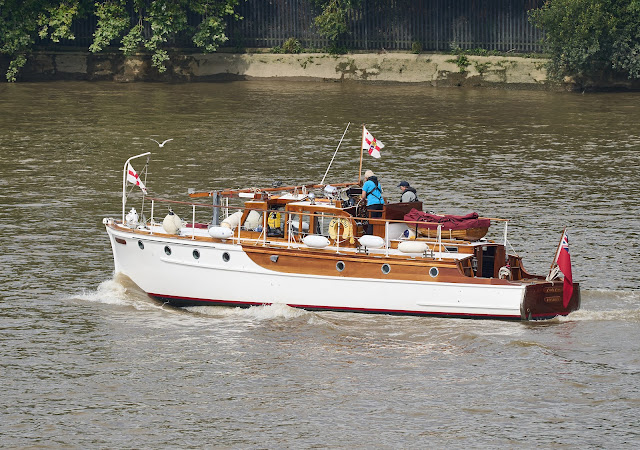 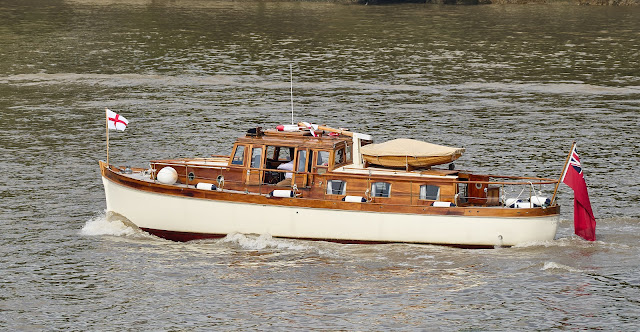 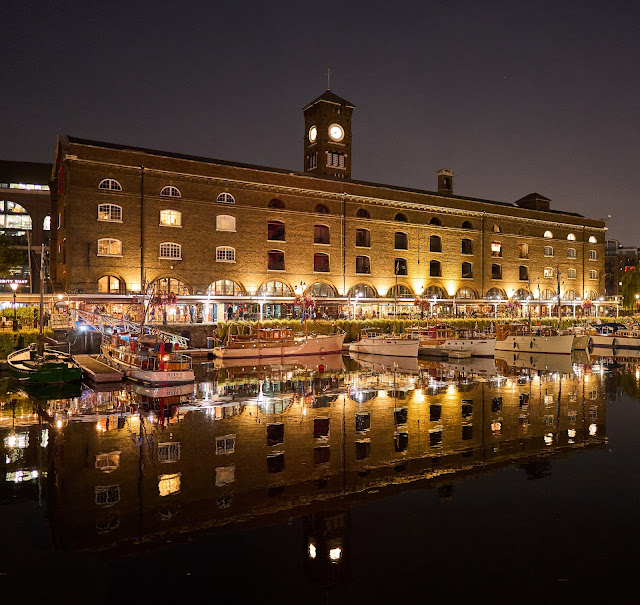 I was really busy the weekend of the Classic Boat Festival at St Katharine Dock (including the trip to the Greenwich Pumping Station) but managed to drop in late Sunday evening. It's actually one of my favourite times as it's a lot quieter, the light is amazing and the water still enough for reflections.

I had a quick burger then wandered around camera in hand: 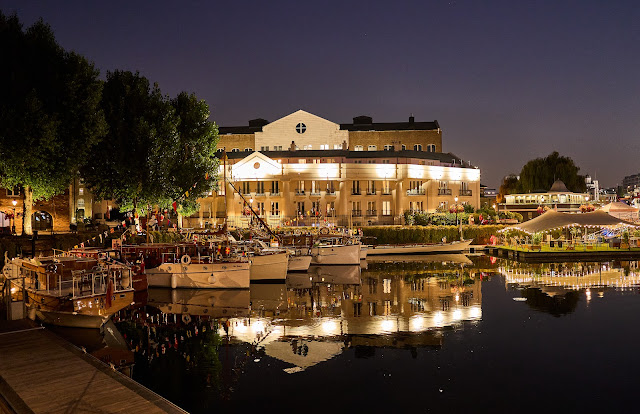 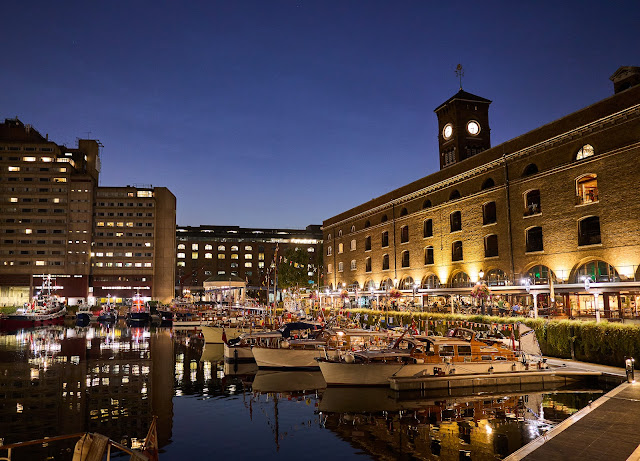 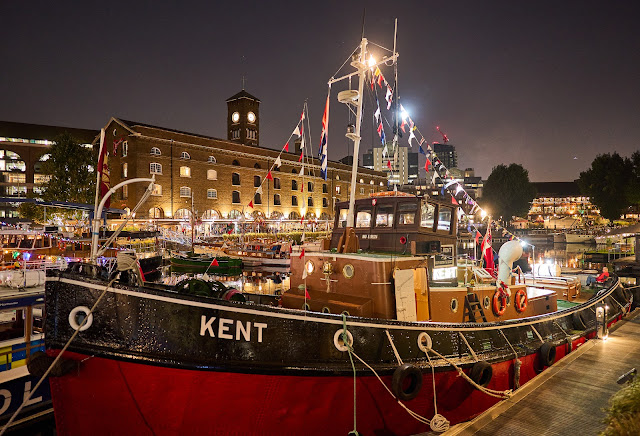 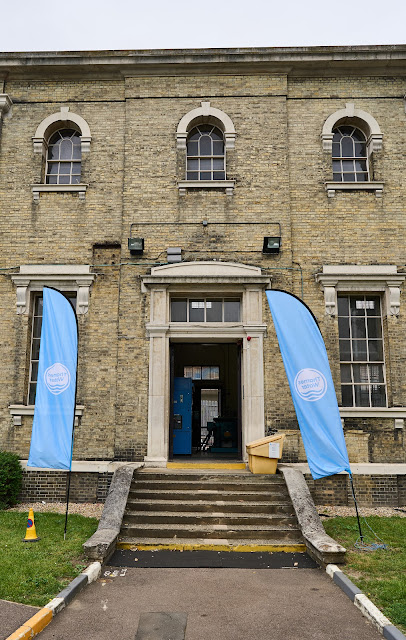 Last weekend was Open House London 2021 when all sorts of interesting places that are usually private and hidden away were accessible.

Some treat it as a race, like bagging a Monro, ticking off building after building, but I tend to select one or two of interest and then leave it at that. But which was it to be this year?

For me it was another of that essential but to be honest rather smelly part of London's infrastructure, namely the sewage system. Previously I'd visited various the glorious Crossness and Abbey Mills pumping stations - and actually gone down the sewers to see Bazalgette's brickwork.

This year I manage to add the Greenwich Pumping Station, another designed by Bazelgette and completed in 1864. The purpose was to raise sewage from the lower-level sewers and then raise up to the upper-level sewers (how do they come up with these names) so the waste could continue its way down to Crossness in the estuary solely using gravity.

We could look down through gratings to see the upper level sewers and the room had a definite flavour all of its own: 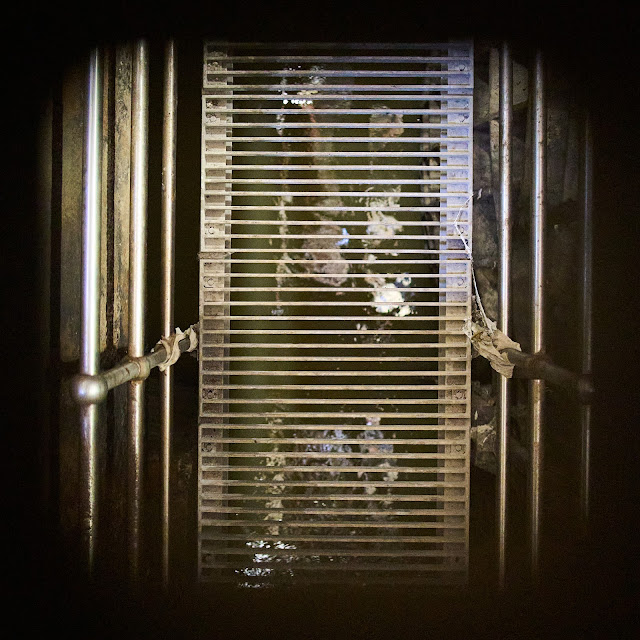 The site is still being used, though the old steam engines have been replaced by maritime diesel engines, allegedly from a battleship, though no one really seemed sure. Unfortunately the building that hosted them counts as critical infrastructure so no photos were allowed.

Here instead is the old water level indicator: 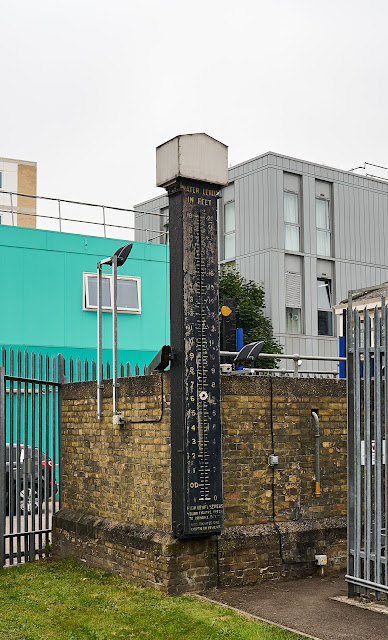 The site is also busy with Thames Tideway Tunnel work, in particular they are still drilling out one of the side tunnels. It is 45m down, significantly below the lower level at 15m.

At the site are four Grade II listed buildings including this which was once the coal shed: 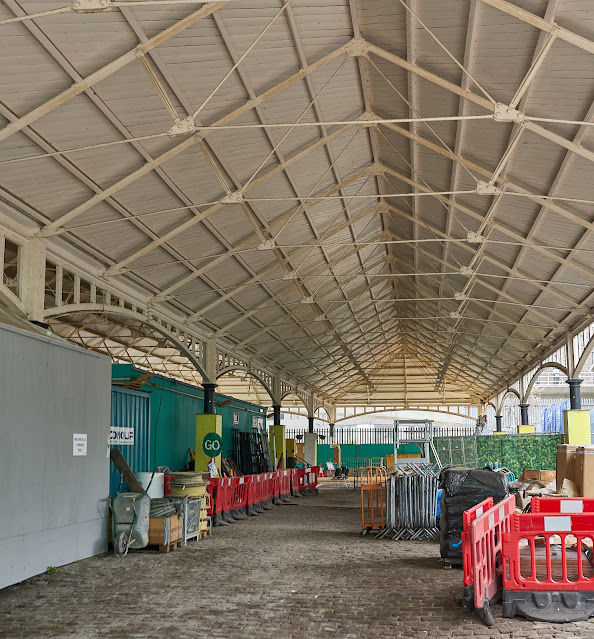 It's a lovely space that you could imagine being used for a market at weekends, with amazing art and delicious street-food. At the other end of the coal-shed (just visible at the far end of this photo) is Deptford Creek: 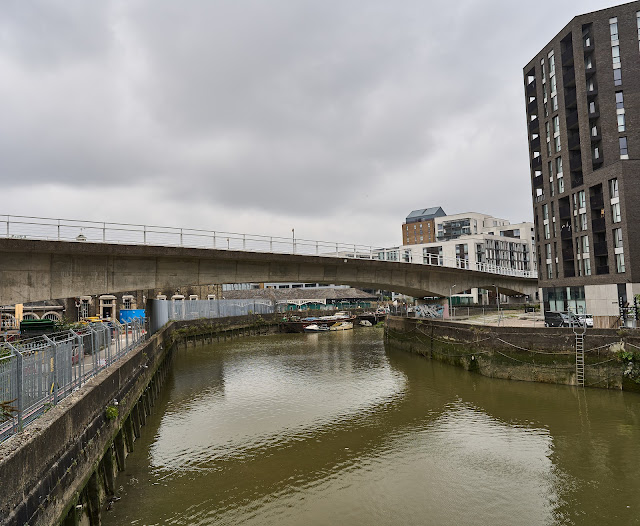 This explains this pumping station's siting, for the creek allowed ready supply by water of the coal needed to keep the steam engines going.

A fascinating tour, another to tick off on the exploration of "London under" and Bazalgette's great sewage system.

I wonder where I'll manage to go next?

Thanks to Thames Water for opening up the site for Open House London 2021.

An Above and Beyond tour of the Lea Valley

The band / DJs Above and Beyond made this warm-up set for their Drumshed (below) gig later that night ( which I didn't go to).

You might recognise some of the locations from my Lea Valley walk over the summer as this video was shot on the Lee Navigation heading north from the Olympic park. 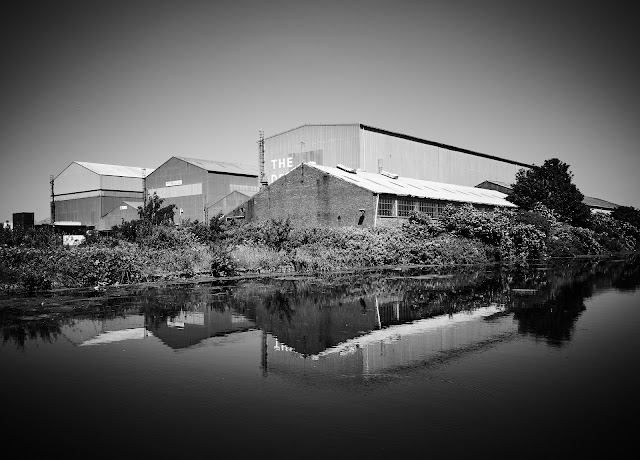 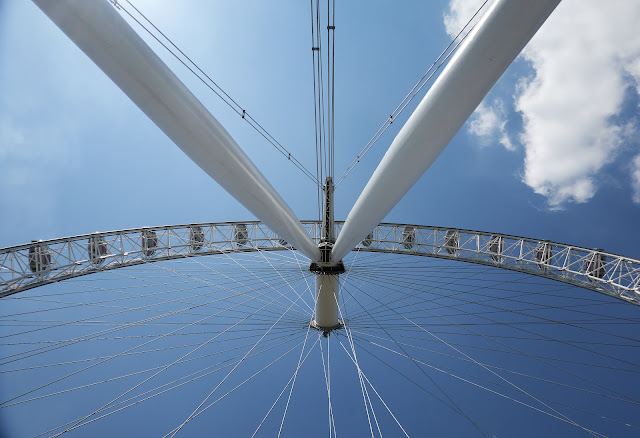 This walk is pretty much tourist heaven as it goes past site after site, including:

So you won't be short of things to see and photograph.

There'll also be no shortage of places to stop for an ice cream, which was jolly useful given the day I walked it (a few weeks ago) was the hottest day of the year so far. 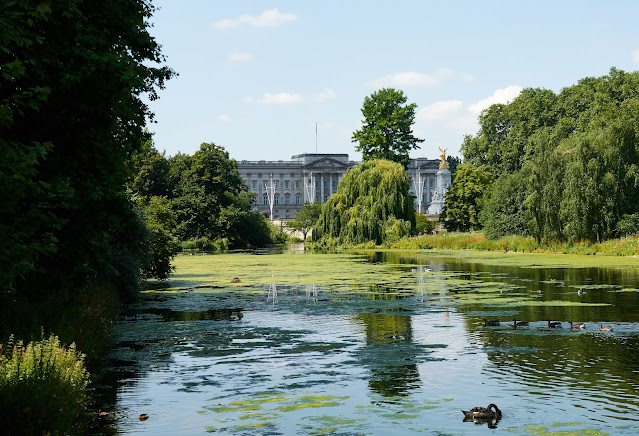 There was lots of opportunities to think about statues and the current debate about suitability. One that caught my eye in Hyde Park was celebrating the Cavalry of the Empire. This might have had meaning in Victorian London but now sounds deeply anachronistic.

High spot was the latest Pavilion at the Serpentine Gallery. This is a structure that is put up in the same place but each year with a different architect. In this case there was also a soothing soundscape called "In a Garden" from Brian Eno - plus shade and ice creams, which were a very tempting combination. 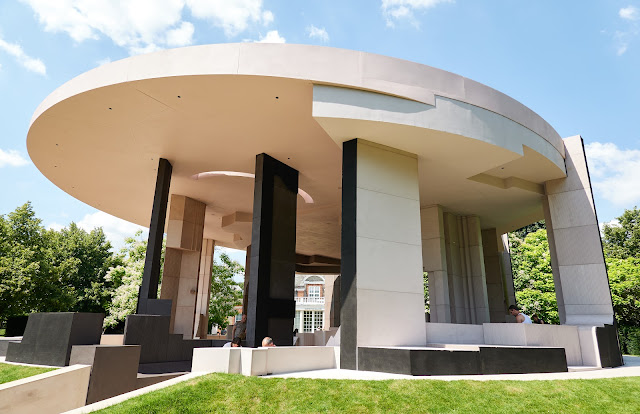 There was a bit of hacking the backstreets from Hyde Park to Paddington and a rapid drop in social status from smart and elegant Embassies to a mess of betting shops and kebab restaurants.

Here I picked up the spur of the Regent's Canal for the final push to Little Venice: 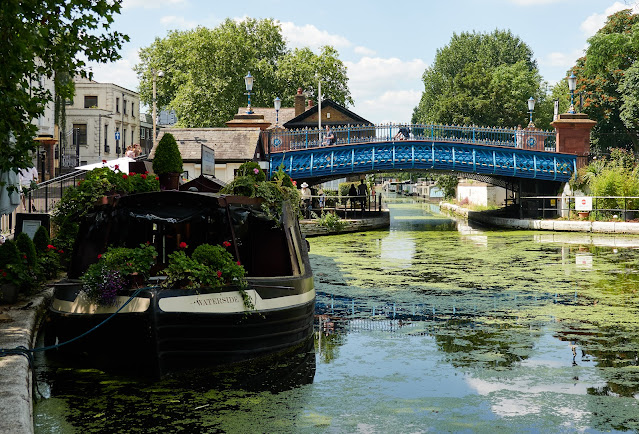 I then back-tracked to Paddington tube via a newly opened entrance by the canal.

Why no picture of Paddington Bear, you might ask? Well the statue has been moved from the station itself to canal side where it was well and truly covered by various children.

So instead here's another tourist favourite: 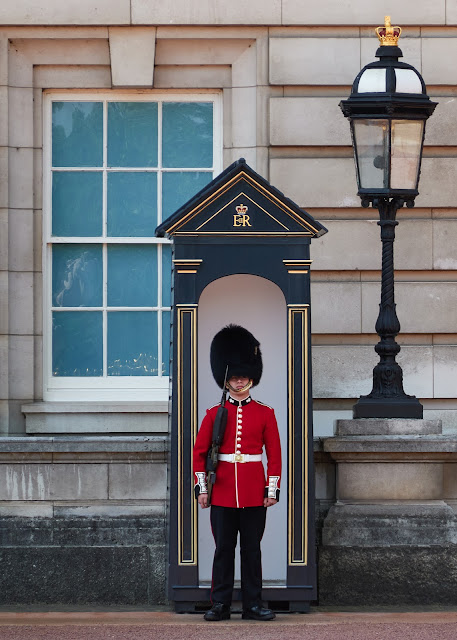 As I took this photo I overheard a boy ask his mum "Where's the Queen?"

"Could you ring her up and ask her to come outside?" he asked.

Alas it wasn't to be his lucky day.

For me it was a two ice cream day, which is good enough for me: 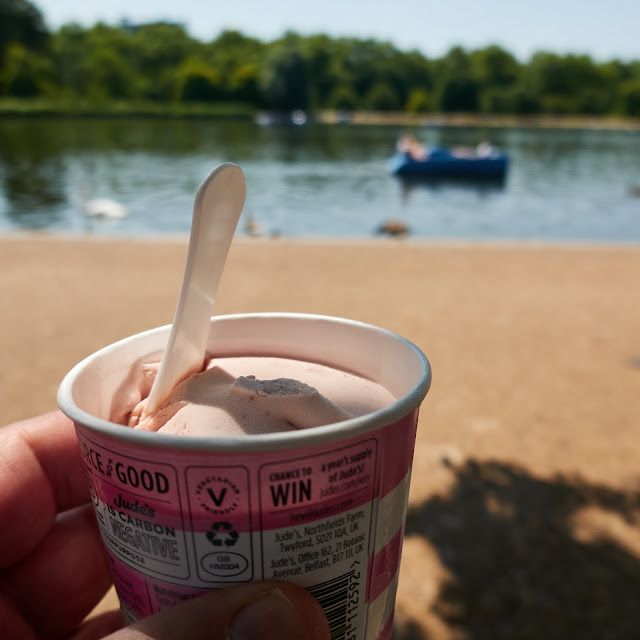