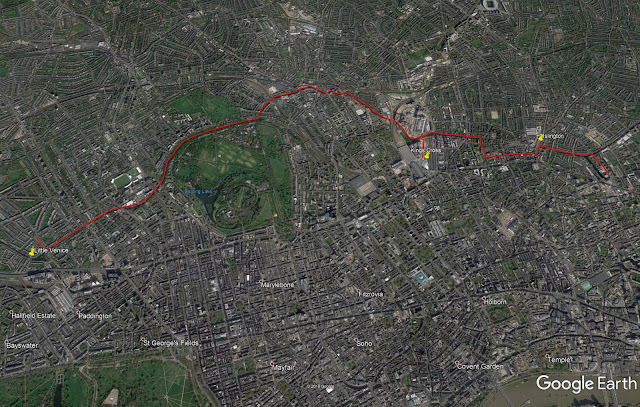 
There was a certain amount of back-tracking and overlap in my walks along London's canals.

This leg was technically the Kings Cross to Little Venice leg as previously I'd done the Kings Cross to Mile End leg to complete the Limehouse to Kings Cross leg (I said it wasn't simple) but this weekend I was in Islington anyhow, going to an art exhibition to see some pumpkins: 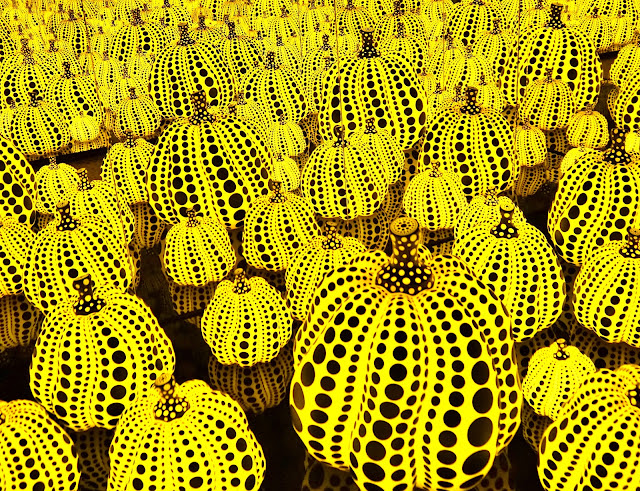 The gallery was off the Wenlock Basin and there was only a short walk along the Regent Canal tow path until reached the Islington Tunnel: 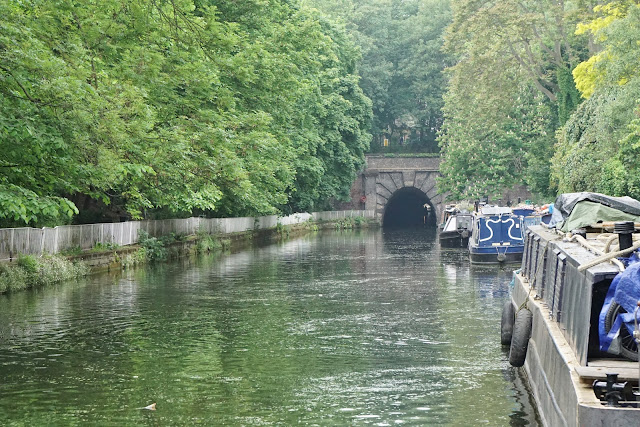 Alas this time there was no one offering a ride through so had to navigate through the estates of Islington until found the other end. In total it was about 2.6 km until reached Kings Cross and the new bit of the walk.

The Kings Cross / St Pancras area is a good place for rest as there are plenty of eat places in the stations and Granary Square is a great place to people watch. There is also a floating bookshop: 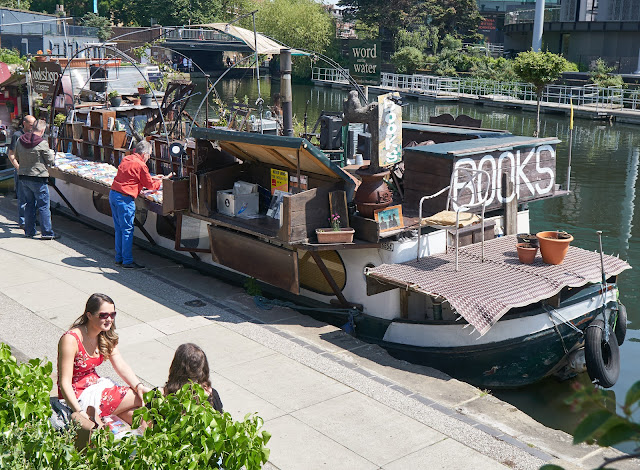 Just after Kings Cross there is the St Pancras Lock, which visited on another occasion before the canal goes under the Eurostar (and other) train lines on its way to Camden.

This stretch somethings feeling a bit "urban" and not rural and gentle like other parts. Camden Lock itself is a misnomer as there is no lock of that name, but there is plenty of snack bars for pretty much every cuisine on the planet. However sometimes it feels like the whole planet is there so on my hike I kept going on a bit further to the southern edge of Primrose Hill. Primrose Hill is rather nice indeed and I had a really super lunch at Michael Madra's restaurant - seriously yummy.

Then on passing Regents Park and the London Zoo - you can actually see quite a few animals from the tow path itself. I was rather surprised also to see this punt: 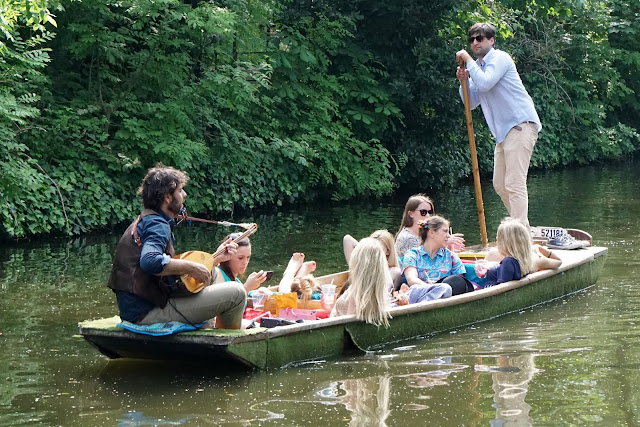 One bridge worth looking out for is known as the "Blow Up Bridge" because it was destroyed in a gunpowder explosion in 1874. The iron pillars were rapidly put back into place but at least one was put back the wrong way round so you can see tow-rope marks on both sides.

It feels so civilised on this stretch its hard to think of that violence and death: 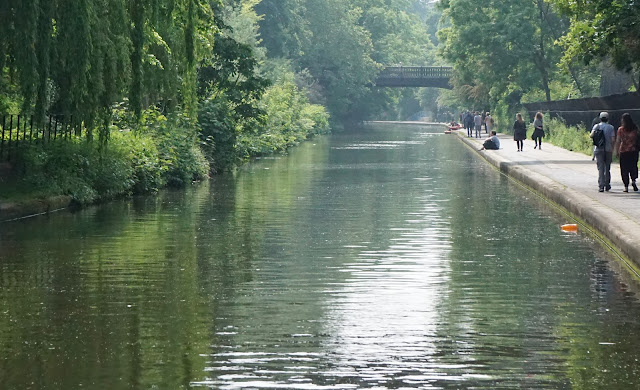 There's another tunnel at the end of this walk and again must be navigated through the streets above, though in this case its relatively easy.

You end up this leg of the walk at Little Venice, which at some times of the year is packed with narrow boats for the annual IWA Canalway Cavalcade, as in this post (with pictures).

From here its a short diversion to Warwick Road tube station and home.

Walking the Canals of London 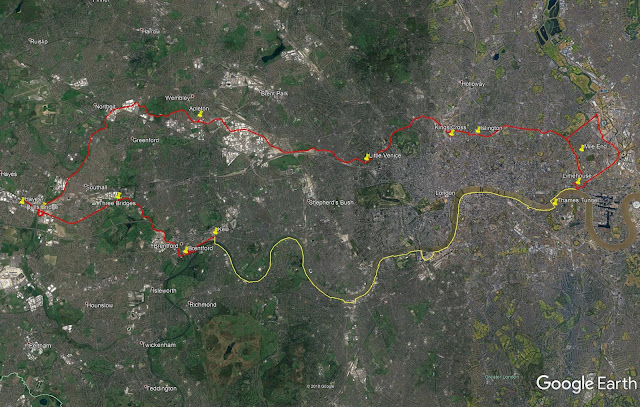 London could be thought of as an island.

I'm not talking about the disconnect between the capital and the rest of the country, but physically an island as in surrounded by water.

The city is well known to be bisected by the Thames but there is also a loop of canals that join the river at Brentford in the west and Limehouse in east, making the land within an island. This loop around London is a good way for those with small craft to explore the capital, as written up in the book "Circle Line: Around London in a Small Boat" reviewed here.

It is also an excellent walking trail which over a number of weekends I've been following. The map above shows the following segments:


There is also the optional:


If you are feeling very ambitious you could close the loop by following the Thames path back to the start, as in:


The route in the Google map above shows a route through Brunel's Thames Tunnel which might have to be taken by train unless you get lucky. The alternative is to cross to the north bank using Tower Bridge.

I've walked or ridden on a bike the whole way round (something like 90 km in total) though not in such neat segments. For example, the Limehouse to Kings Cross was done in reverse from Kings Cross ending up at Mile End (after joining the Limehouse loop walk) and the Kings Cross to Little Venice walk started at Islington (where I happened to be for an art exhibition that day).

If you want something a little easier, why not try the shortest canal walk in London, just by Victoria station?

If you want to know more about the route there's a great series of videos from the Londonist about this canal walk.

The latest book by my Arctic sailing friend, the Natural Navigator Tristan Gooley is called Wild Signs and Star Paths with sub-title The Keys to our Lost Sixth Sense.

What does that mean, you might be wondering? It does sound rather "mystical"....but is that in a good way?

I must admit I didn't get it at first... it seemed more guidance on how to read nature by looking at the shape of trees, but then a light-bulb went off and I suddenly it clicked in a just brilliant way.

This book about synergy and thought, how we think about nature and how our ancestors thought about nature, about how the brain works and how nature works. A tree can't be considered in isolation, it is part of a system, it influences the system, it is a sign as to the environment, which is then an indicator of what else to look for.

It's full of good science, about how neurons work and the difference between our brain's neural net when working in unconscious (or fast) mode and how that compares and compliments the conscious or algorithmic (slow) mode. There's more, considering how micro-climates and soil types drive species that can be found and the symbiotic relationship between plants and animals. It also connects to anthropology and how cultures connected strongly to nature retain and transfer their knowledge, including stories and myths.

It is at times lyrical, with beautiful writing about the relationships within environments and connections to our deep past.

Full disclosure: as noted Tristan is a friend but the copy I read was a present from a family member, not provided by the publisher 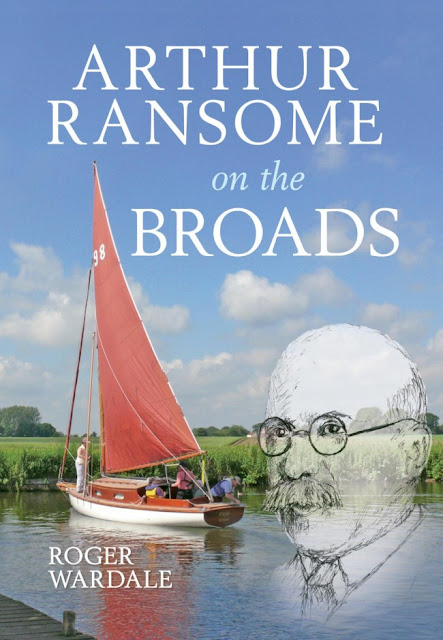 It was a bit like having to listen to someone's holiday story about this great taverna where the owner was such a character and would give them free retsina .... you really had to be there otherwise it was all a bit switch off.

But Arthur Ransome on the Broads by Roger Wardale I rather enjoyed. Partly because it was short, summarising the numerous visits rather than describing each tack, but mostly as it gave an insight into the character and ways of the Broads in the 1930s and how the books came to be written.

Both Coot Club and The Big Six came from his holidays there and you can see the elements emerge, the different types of boats: punts, dinghies, racing yachts, wherries, motor cruisers, motor tugs.... all were there in the diaries and came alive in the stories. Tom's father was a GP and Ransome was to have not one but three medical emergencies on his trip, namely bang to head, appendicitis and hernia so did indeed get to know the local doctor well. There were missed telegrams, storms in Broads, fish caught, falling in (a lot), Horning, bird watching, eel catching, pirate flags, racing....

The backgrounds to the books were especially interesting - such as how The Big Six was almost called The Death and Glories, which to be honest would have worked a lot better as The Big Six needs a certain amount of explaining now.

There were some intriguing insights into Ransome's relationship to his wife Evgena, who seemed somewhere between formidable, domineering even, summoning him with a sharp blow on her whistle!

There was a mysterious reference to how they "turned out to watch the eclipse of the sun" during the 1939 trip which I'm struggling to match with astronomical references - any suggestions?

Overall a useful reference for those interested in Ransome's sailing and writing without having to go through all the original sources.

Paddling on the Thames 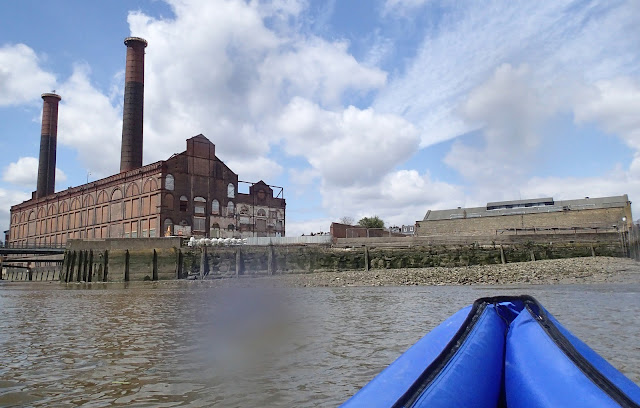 Far too long since was out on the Thames. This time out on the inflatable kayak that is sure but slow, particularly into the wind.

Fortunately this time managed to avoid the deflating (literally) sound of "ssssssss....." from a previous trip that required an urgent paddle to shore to avoid having to swim. 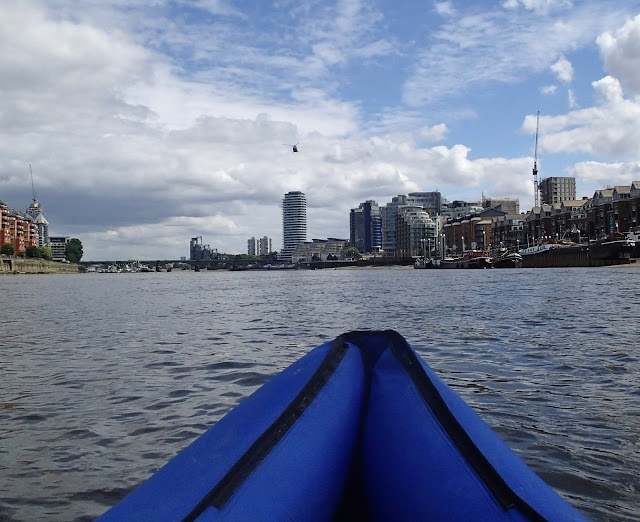 Spot the helicopter (above). For some reason the camera had gone into 16:9 mode so not taking the full resolution photos.

Email ThisBlogThis!Share to TwitterShare to FacebookShare to Pinterest
Labels: boats 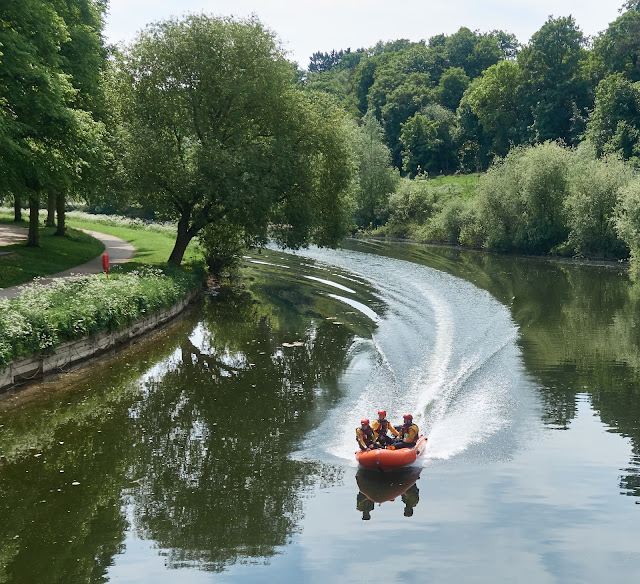 Recently I had a very brief trip to Shrewsbury and there was just time for a short walk by the River Severn, so only got two of the usual three boat pics. But the Porthill Bridge was rather picturesque and nearly 100 years old: 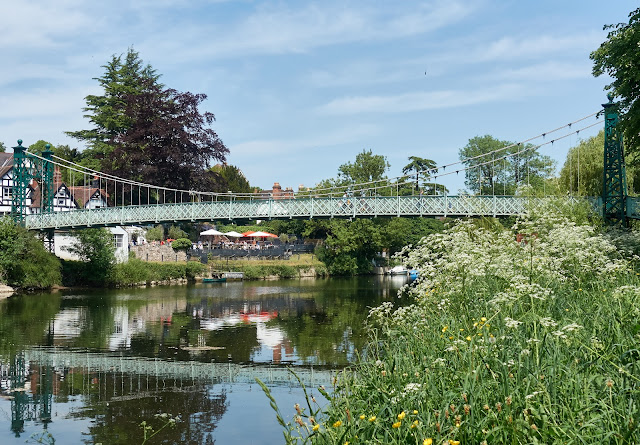 And here's a boat + bridge pic: 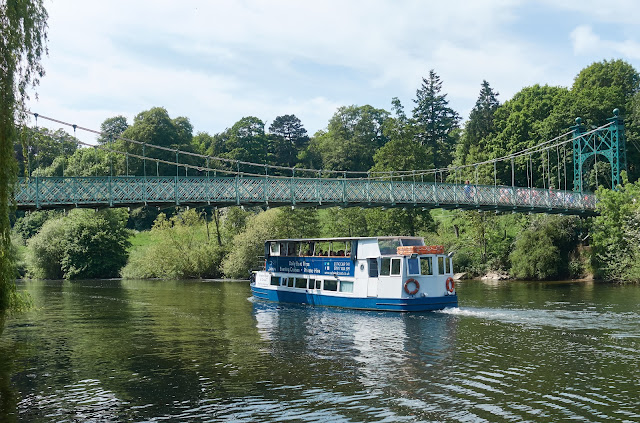 There are all sorts of boats usually on the Severn, such as kayaks, canoes and rowing boats (of various sorts) but not on a Monday lunch-time apparently.

Email ThisBlogThis!Share to TwitterShare to FacebookShare to Pinterest
Labels: boats

Heron flying over the Thames 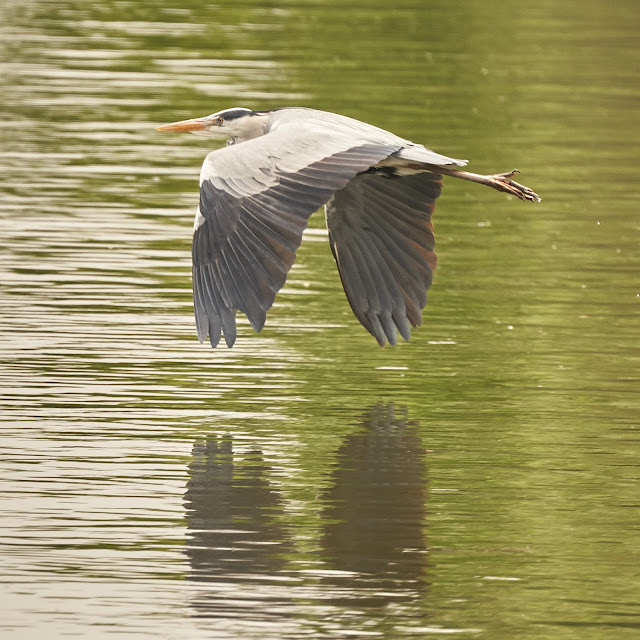 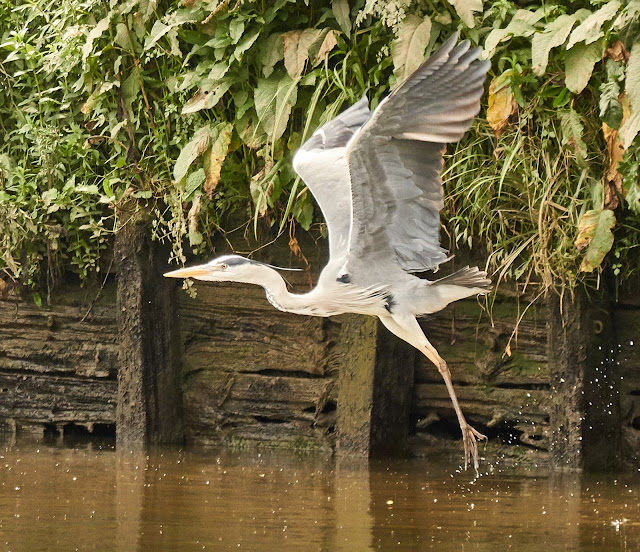 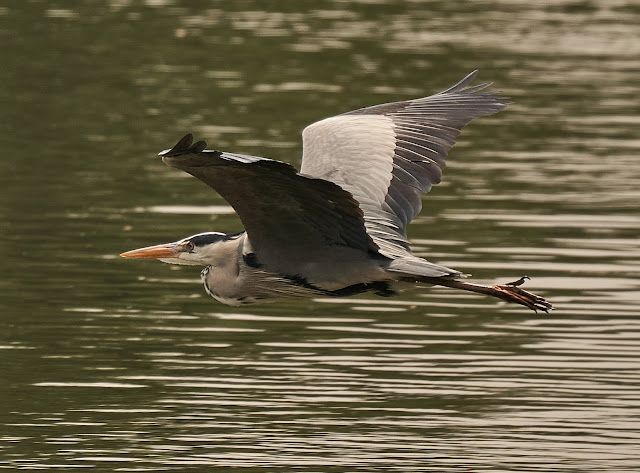 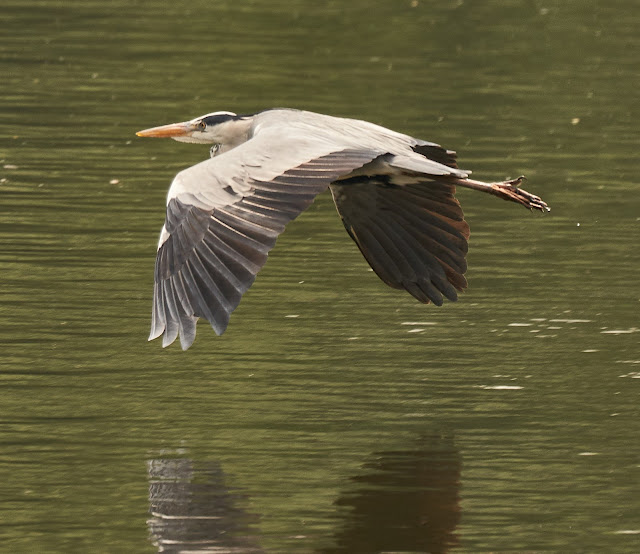 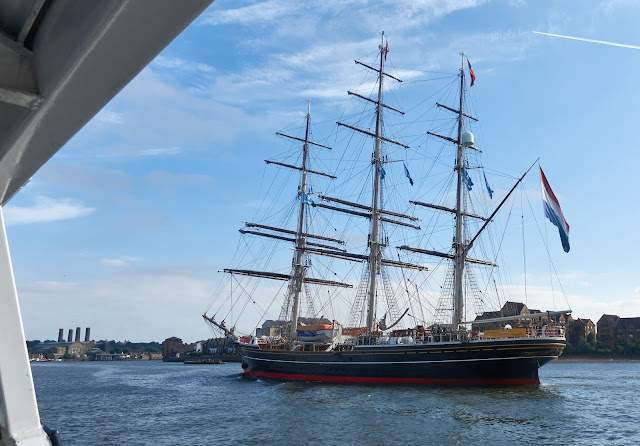 I might have mentioned before how much I enjoy using the Thames Clipper Riverbus to get around in London. The views are always fantastic and sometimes you get a special treat, such as earlier this week when looked to starboard and saw us passing the Stad Amsterdam (City of Amsterdam).

This is a three-masted clipper that was built in the city of that name in 2000, and it is currently visiting London. 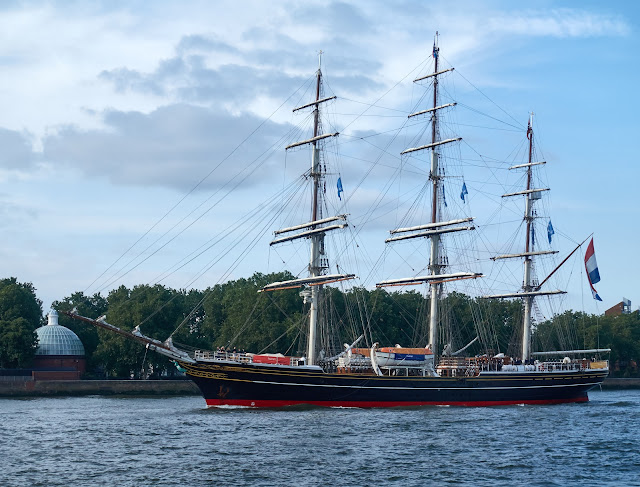 What a great sight! 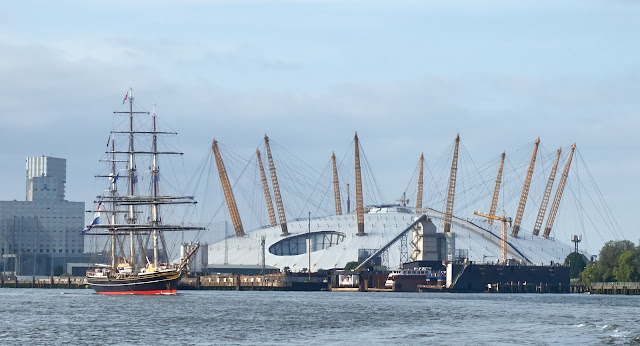 Heron on the Thames 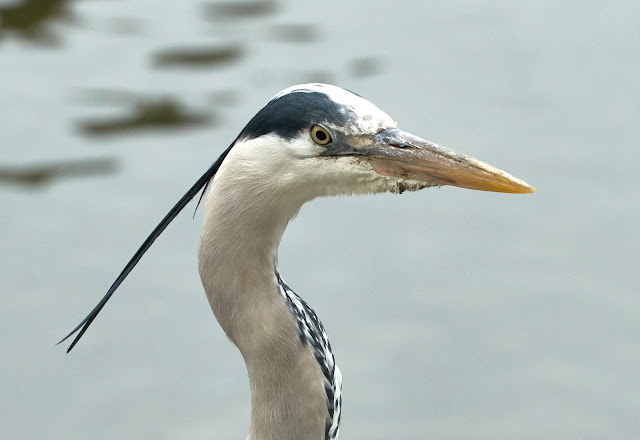 There are many herons on the Thames, and some of them are surprisingly ok about humans getting close up with a camera: 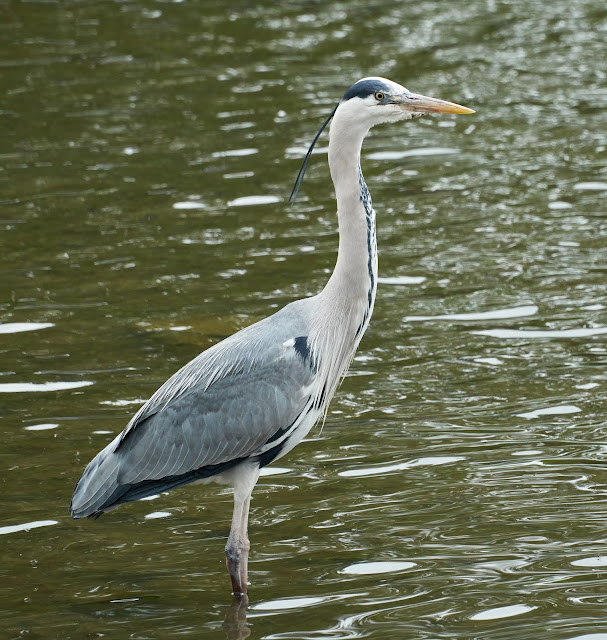 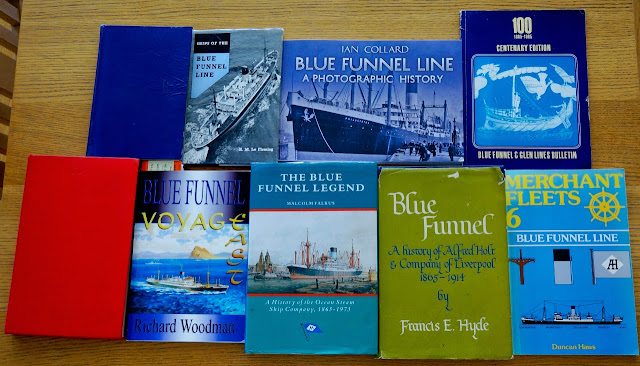 Previously I've done a post describing books about the Blue Funnel Line but since then I've read quite a few more so thought I'd give an update.

For those wanting to know more about the Blue Funnel Line there is a reasonable range of books on this topic, including those in the photos above and below. I've only reviewed a handful of them, though more might follow in the future.

Three of these books are histories, that set out to record what happened in the company over specific times, and each achieves its goal:

Travelogues and Life on Board

These are highly readable descriptions of life on-board a Blue Funnel ship as it travels between Liverpool and the Far East. The first three are particularly of note: the first one is disguised but apparently is S.S. Polyphemus in 1907 and the second an amalgam of several voyages on similar vessels in the 1960s. The third is the description of what is indeed a remarkable life, the first female marine engineer:

Finally there are reference books with lists of ships often with photos:
Let me know if there are any others out there I should be collecting or if you'd like more detailed reviews. 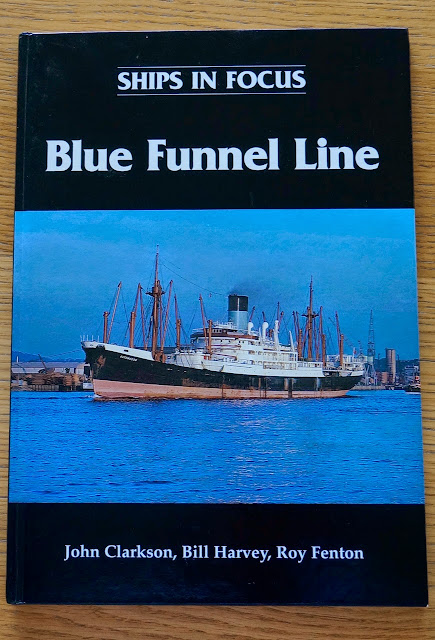