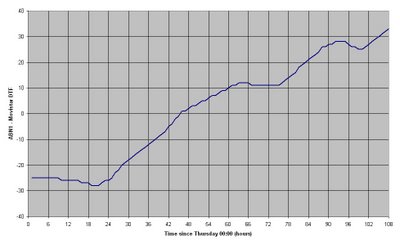 ABN1 has remorselessly powered past the rest of the Volvo Ocean race fleet and now has a 38 mile lead, revelling in the steady trade winds and the reaching conditions its design excels in. The figure above compares the performance of Black Betty (as she's affectionately called) with her nearest rival movistar, measured in terms of the difference between the two of their distance to finish (DTF).

While there are pauses in the black boat's charge - and even the odd temporary reversal - the average over the last few days is around 0.6 - 0.7 knots faster and sometimes it's a full knot quicker every hour for a whole day.

Thats the sort of numbers that keeps the opposition awake at night - or at least used to until they became resigned to following in Mike Sanderson's wake and have now focussed on the other two podium positions.
Posted by JP at 9:13 pm

Can you do aircraft stuff?
We talked about blogging today in san fran.
Do I go to the golden Gate tomorrow?
One more morning in San Fran???

Thta's a huge difference in speed. Hardly seems fair. Most of us would kill for a tenth of a knot better boatspeed than our competition.

There's something to be said for all using boats using the same hull to equal things out a bit.

More on this later!