This weekend I've kept my upper lip stiff and my shirts starched while had a spot of tiffin with the natives as sailed from Liverpool to Yokohama courtesy of "The Surgeon's Log".

It was an unexpected delight. I picked it up without great expectations in a local charity shop, but it turned out to be a bit of a minor classic. Its a travelogue, written in 1911 about the experiences of one Dr James Johnston Abraham on board the S.S. Clytemnestra between January and June 1907, and which went on to have over 30 re-prints.

Now this got me pretty excited as the Blue Funnel Line was set up by one of my great-to-the-something uncles, and it was wonderful to get a feel for what life must have been like on one of his fleet. Often there was mention of seeing another of the company's ship in a far off port, and the comradeship between the crews.

There was another family connection, as the doc had to hand William Dampier's writing, which he often quoted. The opinions of that "quaintly pious buccaneer", as he was described, were given on topics from water-spouts, to places like Achin, to the taste of the durian fruit.

Some aspects were less encouraging. The views and character studies of the peoples of other nations would be pretty unacceptable nowadays. Basically there is John Bull (solid, adventurous, brave, active etc), John Chinaman (respected as ok in a hard working way) and then the rest, Johnny Foreigner (misguided, devious etc). Having said that a Google for "cheese eating surrender monkeys" returns over 60,000 links, so maybe we haven't progress that far.

But there are signs his views changed as the voyage went along. In Penang on the way out he admired the white formal dress of the Brit abroad; but by the return journey in Java he was suggesting that the native dress was far superior for the climate. By then he was also more receptive, and able to spot the subtleties of local architecture and drama.

My copy of the book was illustrated with 16 photographs, though the first edition had more. One that was missing, but found on the Ships Nostalgia forum, was particularly touching. One of the ship's officers had a romance with a Japanese girl called Ponta, and there a photo (below) of her and her friend walking down the street, with umbrellas to protect against the heat of the day. 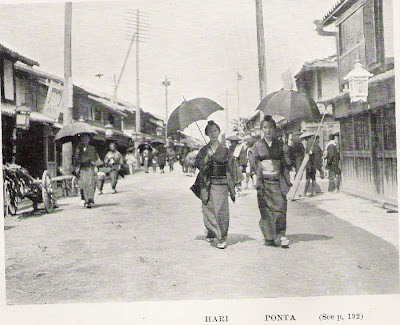 I wonder what happened to the author and what romances he had. He dedicates the book to "My Australian Wife" and my copy was published in Melbourne, where co-coincidentally I should be in a few weeks.

There is a wonderful sense of what life must have been like to have been a privileged European touring the world and getting a glimpse of life of so many other cultures. In those days wind jammers - tall ships as we would call them - still sailed the sea. Opium was not banned, just subject to a Government monopoly.

Life was indeed very different then, over a hundred years ago, in the days when you didn't have lunch - you had tiffin.
Posted by JP at 10:59 am