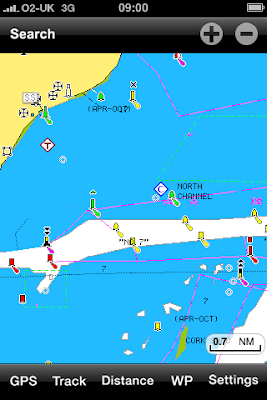 Recently I was reading about sailing on England's east coast and it was fun to be able to pull up the charts of Felixstowe just like that using my Navionics charts on my iPhone.

I've done a bit more exploring of the V2 update but to be honest kept on wondering if it was me or the software that wasn't quite right. In the end checked out their help pages (which you can find here) and decided it wasn't me.

What I was trying to do was set the waypoints at specific lat/long points, or move existing ones set to new locations, and was not successful.

But there are definite plus points for this release, like the new tide graphics that show direction and strength: 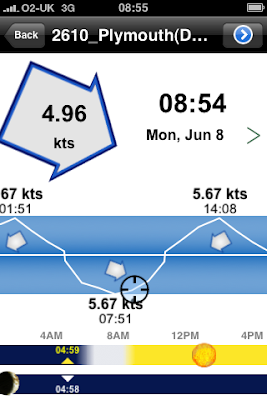 You can move the little sniper sights circle to the time you're interested in which is fun. There is also a water height screen: 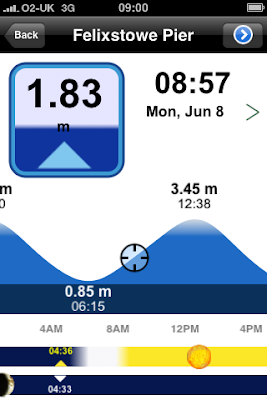 If you want the raw numbers just like in the almanac well here they are: 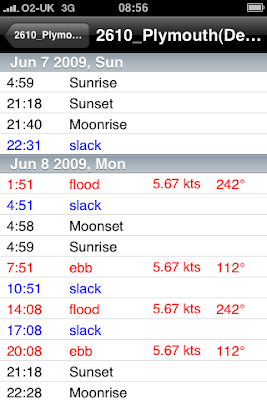 There's also a screen with the way points on them and heading / distance for each segment, which would be a good place to put those waypoint editing screens (hint hint): 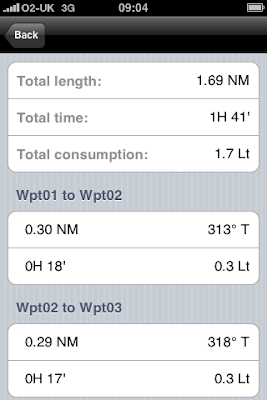 I had terrible trouble with the way point edit function and basically decided the only option was to do it right first time, which given the imprecise touch screen is pretty unlikely.

While the tide prediction seems to have lost the implausible discontinuities of previous versions the feature to highlight areas with insufficient depth seems to have its own bugs. In the pic below there are all sorts of dangerous banks outside Felixstowe, and Navionics seem to truncate them. 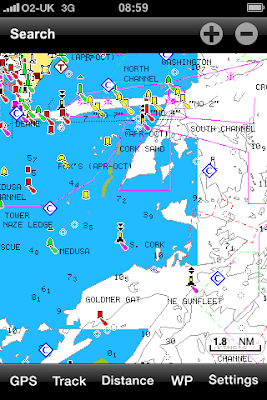 Interestingly if you zoom in the fill is correct.

I did try and show off the "Track" option which shows a wiggly line of where you've been (ok, if you steer brilliantly maybe you'd get a straight line). I did this on the train to work (check out the times of the screenshots) and it was a dismal failure.

There are two problems:
1) Was very rarely able to get GPS lock in the train carriage
2) The iPhone kept switching into standby to save power

So what? you are probably thinking. Well if you use the GPS a lot and stop the going into standby then the iPhone battery will drain like there is no tomorrow. So the only way of really doing the track is to be plugged into a power, such as by the nav station, which of course would be useful place to see it.

But of course the nav station is below deck, and so there would be some attenuation of the GPS signal, maybe not as much as in a train but certainly some.

Hence what you want is outdoor electrics, which you don't often do on a sail boat but might on some form of gin palace.

Together with the inability of the depth colour feature to take account of tides makes me wonder if the target market is motor yachts in the Med.

Co-incidently Navionics is an Italian company!

I knew that there had to be an app for that!

Motor yachts in the Med, eh? Well, I know of at least one MacGregor that has a power outlet in the cockpit.

Not that it matters much, as the electrical system on most MacGregors doesn't actually work all that well ... and if you want to change a light bulb, um ....

How many iPhone owners does it take to change a light bulb?

Brilliant, especially as the MacGregor in question, Mac Goddess, is owned by a couple who are fans of all things Apple -- the boat was named after the woman, a service tech, that the man met when she went to fix his computer. There's even an Apple logo on the sides of the boat. And it was the first boat -- not just sailboat, but any kind of boat -- in New Mexico to be outfitted with an iPod-based sound system, so I'm sure there's an iPhone in the picture somewhere.