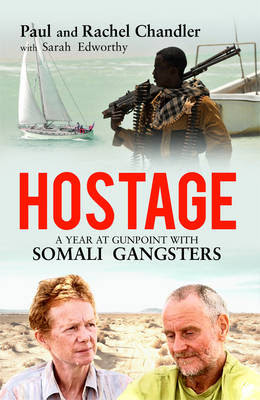 There is not much sailing in this book; but if the sailing had continued past page 2 there wouldn't have been a book at all. For this is the story of Paul and Rachel Chandler, the attack by pirates on their yacht Lynn Rival sailing off the Seychelles and their long, long captivity.

Of course we all know how it ends - indeed I met them at the London Boat Show - but what happened in-between, somewhere lost in a lawless land?

It is probably a question many have wondered on hearing stories of hostages in failed states around the world. The reality is boredom, helplessness, fear, discomfort and soul destroying uncertainty. No contact with the outside world, no way of knowing what is going on and most importantly when - or even if - it will all end.

During these long months they relied on the one thing left to them - each other. But then even that was taken away from them as they were separated, kept company only by their guards in a series of shacks and camps in the Somalia wilderness.

It is hard to make even the slightest suggestions to a couple that have been through so much, but I wanted to know more about the politics of the land and the back story behind their captors.

What impact, for example, did foreign interference in Somalia have in destabilising its government? Did this lead to a loss of control of Somali waters and hence influx of trawlers with devastating impact on local fishing fleets? How much did their guards know about Britain? What was their education? What were their hopes?

I don't think either Paul or Rachel will be going back to ask those questions any day soon.

The book flows well and there are some useful maps and a couple of snatched photos which both add to the text.

If you want to know more about the realities of piracy, ignore the Hollywood fantasy and read this book instead.


Picture from: Waterstone's web site
Posted by JP at 9:38 pm