Preparations for the Queen's Jubilee Pageant 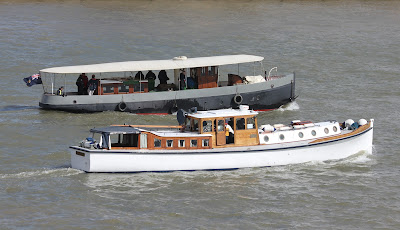 You have to treat rivers and seas with respect.

There's not just the sad story over on Never Sea Land of the deaths in an offshore sailing race, as you could drown right here in Thames. Of course there are things you can do to make the sport safer - like clip on or not drink over six units of alcohol, as in this collision report.

That's a valuable lesson for the Queen's Jubilee Pageant (blogged earlier) where there's going to be a 1,000 strong flotilla of boats packed into the narrow waters of the Thames.

It helps that of course they'll mostly be going the same direction (one hopes) but still I can see why the PLA would want to do a bit of rehearsals. At least that's what I think they were doing last weekend when there were 40 - 50 boats churning up the waters.

Most in the first of two bunches of boats were plastic production line models but there were a few more interesting ones in the second (above).

Further preparations can be seen towards Hammersmith Bridge where the first of the buoys have been laid: 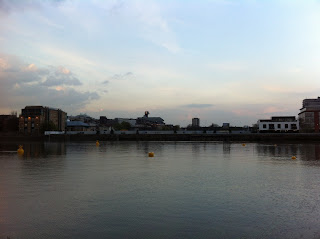 BTW, the vacant lot across the river in this photo is where they're going to build the exclusive riverside development "Fulham Reach" with decoration allegedly inspired by Oscar Wilde as blogged here.
Posted by JP at 5:01 pm

Do you know anything about the grey vessel here?

Alas no - if anyone has any ideas feel free to add a comment.