Book review: "A Race Too Far" by Chris Eakin 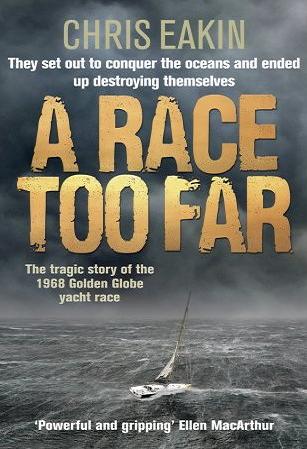 Of all offshore sailing races, none can compare to the 1968 Golden Globe. To this day it fascinates and is the subject of this great book by Chris Eakin, A Race Too Far.

Its a story that has everything: the place in the record books for the first single handed sail around the world, the battle with the elements, boats that literally fell apart in storms, a great victory, a broken man cheating and lying.... so much drama, so many great characters.

And its been the subject of a series of books, from participants like Robin Knox-Johnston's A World of My Own and Bernard Moitessier's The Long Way to writers like Peter Nichols's A Voyage for Madmen.

At the London Boat Show I met Chris Eakin and picked up a copy of his book, A Race Too Far.

I did wonder what more there was to say about this race, and it turns out quite a bit. For the story didn't end when Knox-Johnston stepped ashore: the participants and their families still live under the shadow of the events of 1968/69.

I really enjoyed this book and its very well written and researched. He tracks down the survivors of the race and some close relatives to competitors for their reflections and memories. These were not always easy given the inevitable damage that comes from the suicide of Crowhurst, the inexplicable death of Tetley and the abandonment of his family by Moitessier.

As you'd expect Knox-Johnston comes across as the most rooted, (distressingly) normal and supportive of the families of other competitors. He also seems to have moved on the most and least likely to dwell on the past (apart from correcting the niggles that Moitessier might have got their first).

Strongly recommended, a worthy addition to the literature about this great race.

Thanks, though as always when re-read start thinking of ways of polishing (e.g. getting rid of that repetition of story in para 2)

I read this recently too, and enjoyed it very much. I agree with you - I was a little sceptical that their was much more to be said, but the description of the race is enthralling and the follow up stuff was really enlightening and gave a real sense of the long-term impact the race had.

Thanks! Also, there's a film coming out with Colin Firth as Donald Crowhurst and Rachael Weisz as his wife called The Mercy so will keep an eye out for that. Not sure when its due for release: apparently during filming Colin Firth "was hospitalized with a hip dislocation"!