The Vikings: their ships 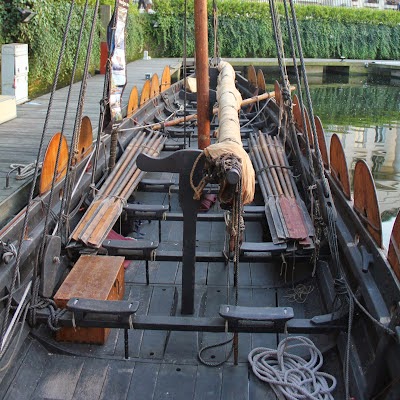 In the previous post I mentioned a disappointing Viking exhibition at the British Museum. Ok, it might be that Viking navigation is a specialised subject, but their boats really are core to their identity. What did this exhibition do?

Alas, rather than having a real boat - or even a reconstruction - it had the framework of one made out of metal.

I remember seeing the Sea Stallion in Dublin a few years ago. It's a replica Viking boat that really sails, and in fact crossed the North Sea on a voyage around Scotland and down to Dublin.

Seeing a real boat was so much more than the shell in the British Museum, the smell and feel of its wooden planks, and hearing about the valuable experience of actually being out at sea. The sailors learnt it was faster to windward rowing than sailing, and that the steering mechanism could (and did) fail.

It was a story that would be familiar to W. Hodding Carter who wrote about a similar breakage of their steering oar in their reconstruction of the Vikings discovery of America in his book "Viking Voyage".

The physical presence of the boat together with these lessons are much more informative than a metal frame, however large.

But the biggest impression I have ever had from a Viking boat is when I was on-board the smaller Helge Ask which visited London in 2012. The experts showed me round and then shook the boat from side to side to show its flexibility.

It was really remarkable how the timbers flexed, waves travelling down the boat, alive completely unlike a rigid metal frame.

It would be even better actually to go out to sea on one: not sure how to arrange that but I spotted that the Viking Ship Museum in Copenhagen has that option.