The America's Cup is boring brilliant! 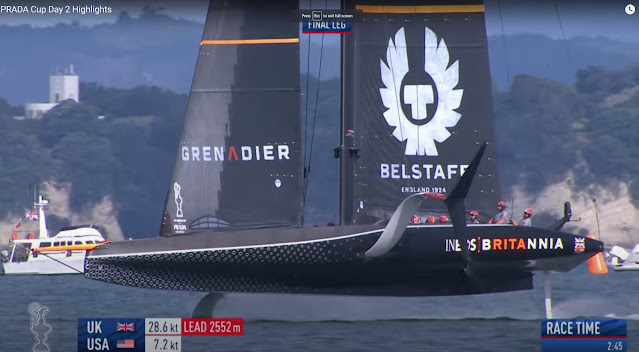 After the America's Cup World Series (ACWS) I had that familiar feeling of any sailor from the UK following the oldest sailing competition: disappointment. Yet again our entry was slow, losing every single race.

But recently things have changed and the score in the Prada Cup is currently: 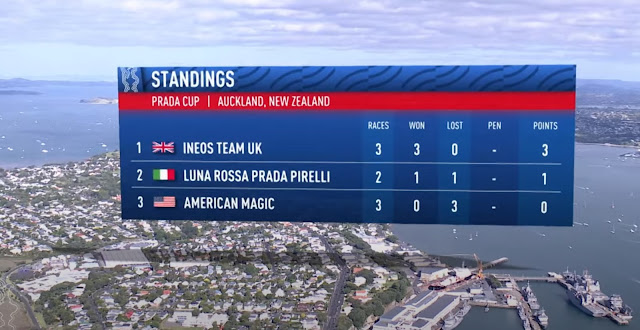 I have been waking up and checking the interwebs for news and twice now been mind-blown by seeing the results. Then I stream the America's Cup YouTube videos of the races while waking up over a cup or two of coffee.

But I also remember this is just the beginning, and the other teams are also working equally hard to improve their performance. So don't get excited yet but enjoy the screenshots above.

BTW, for the commentators, a tip and plea: please remember that England is not the UK or Britain and not to confuse these terms! This is a rather sensitive point at the moment given that Brexit has put up trade barriers between Britain (which is England, Scotland and Wales) and Northern Ireland (which together with Britain makes the United Kingdom) and that the Nats in Scotland are always looking for excuses to feel angry with those south of the border.

More annoying to me is the commentators using the sponsors name(s) instead of the boat or country. Your boat is Britannia from the RYS representing GB(R), not Ineos.
It is pleasing to see Britannia coming back so competitive. I’m looking forward to NZ winning in a tight AC with GBR.

Yes, I agree, it would be better to call the team after the boat, Britannia, or team, UK.

Really? I quite like seeing this as a battle between Team Multinational Chemicals Company, Team Middle Eastern Airline, Team Italian Luxury Fashion House and Team European Aerospace Corporation. Too bad there's no team from America.

As a former chemist, I am hoping to see Team Multinational Chemicals Company beating Team Middle Eastern Airline in the final.

.. not sure that has the same ring as Go Team UK