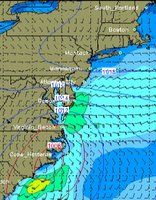 Yup, the Volvo Ocean Race is heading for the big apple, the city so good they named it twice, New York and then again, New York.

Ands it's the American entry, Pirates, that is currently leading the pack, with ABN1 for once languishing at the rear.

Because for now it's Farr weather out there, but the light winds will be replaced overnight by a good 20 knot blow that the beamy dutch boats will like, making this a sprint of a leg one that will go to the wire. The figure above shows the forecast for Monday morning (east coast time) when the fleet should be half way there. More can be found here.

While ABN1 can survive one or two bad positions, the fight between Paul Cayard's boat and equally determined Movistar will be one worth watching, all the way till the fleet is in the protective gaze of the Statue of Liberty.


Graphic from www.stormsurf.com
Posted by JP at 8:10 pm