Frustrated at being unable to follow the 5 Oceans? Unable to get the official web site to work? Fear not! Here is your cut out and keep (Blog lawyer: you can't say that!) - ok your print out and keep tool-kit to following the fleet to Fremantle.

Firstly head to Mike Golding's web site to get the rankings and positions, like this: 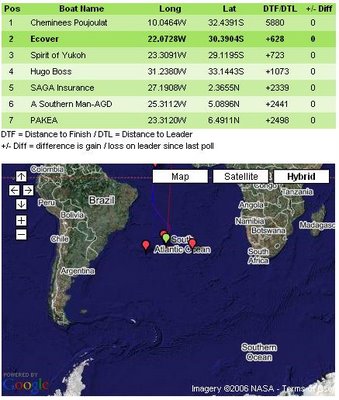 The top four are in South Atlantic and last three close to the equator. The DTL closing is clearly out, but it looks like Mike is falling behind. Checking the tracks it appears Alex Thomson is heading as if towards the wrong Cape - towards the Horn not Hope.

To understand both these, lets check out the weather down there. On Stormsurfing this is the forecast for tomorrow morning. 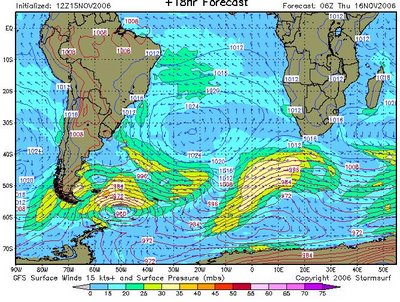 The leading boat's progress is blocked by a high. Bernard Stamm is close to getting out the other side. Alex Thomson is thinking of heading around the high to the west - which could be a smart move. If you run the animation you can see the high drifting east, following Stamm, breathing down his neck - which can't be a good thing.

To find out how each of the skippers are doing, check out their respective sites:

- Mike Goldings knows he's got problems - Stamm ahead and Alex out-flaking him.

- Bernard Stamm is writing in French. I can't understand it without really concentrating....

- Kojiro Shiraishi is writing in Japanese. I really can't understand it at all!

- Graham Dalton is not writing on his site - any ideas if he is anywhere else?

- Robin Knox-Johnson hasn't written for a bit - but there's a reason for that....

Robin Knox-Johnson is having problems - there's a series of stories on the Yachting World site, including him:
- having a Chinese gybe
- reporting all the battens in his main broken
- struggling with modern technology

The last is a fascinating insight into how sailing has changed since Robin was in "A world of my own". The old school sailor is having to adjust to the modern technology of grib files downloaded by satellite rather than simply tapping at the barometer and peering at the sky.

But one thing hasn't changed for Knox-Johnston - the wee dram of whisky.

See - all that coverage, and not need to go to the official site.
Posted by JP at 8:23 pm