The giant squid, the sinking boat and the whisky bottle 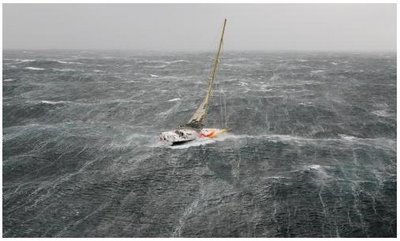 More drama for both the 5 Oceans and the Route du Rhum:
- Mike Golding's boat Ecover (above, in the Bay of Biscay storms) has been attacked by a giant squid
- French skipper Didier Levillain was whisked by helicopter to safety as his monohull sank beneath him
- Multi-hull Orange had the central of three hulls damaged by collision with a container
- Mast climb for Nick Bubb to retrieve a stuck halyard in rough conditions
- Multi-hull Switch.fr capsized when in third position, crew now rescued
- Concern about leaky whisky bottles on Robin Knox-Johnston's boat Saga Insurance (now that's serious)

Given all this drama its amazing how little of it is reported in either the print or tv news. So many sports gets so much coverage why (oh why) is so little time available for sailing? How can the stories above be less interesting than something like Formula 1, where cars just go round and round and round in circles?

Of course it would help if there were better ways of explaining what is happening during an offshore yacht racing - and more importantly why. Tools such as Virtual Spectator should be universal rather than the exception, where animations show boat positions and weather systems so tactics can be clearly explained.

It isn't helped by crap web sites like the 5 Oceans one, which has recently issued this belated apology (anyone interested in following that race can find a race viewer that actually works on Mike Golding's site here).

But that should be a story in its own right, a bone of contention that few can argue against. Unlike last year's fake controversy created by some sailing magazines (Yachting World you know who we mean) that criticized the new Volvo 70 class - false because those most involved (the sailors) were fully behind it, and it will continue to be the basis for the next race.

In the mean time the RdR fleet continues to power its way to the Caribbean, nice trades aligned with the direct great circle path. Must be fun out there. 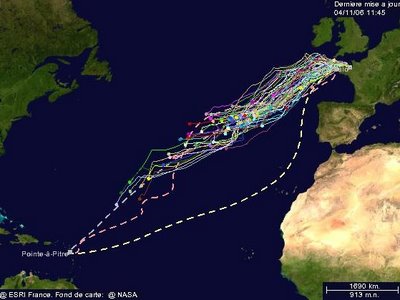 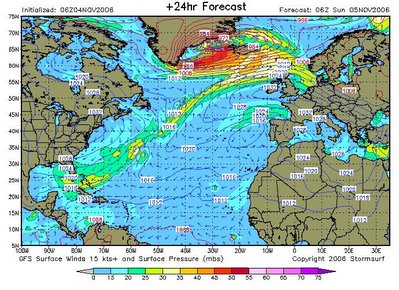