Why have a weir on the Wandle? 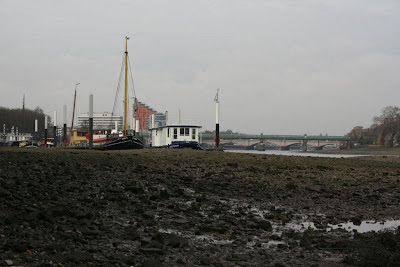 I've been wondering why there is a weir at all at the mouth of Wandle. The Wiki entry on weirs gives a number of reasons, from navigation to fishing, neither of which seem that convincing. Given the low rain fall over the last few weeks it can't be to manage flood levels.

A more plausible explanation could be to manage silt, of which there is quite a lot. The Thames is a thick, brown soup, suspended mud particles making the water opaque. The view above shows a bank of it deposited just by the Wandle.

This is very low tide - if you look at the tide tables on the PLA site you'll see the range between low and high tide reached a peak of 7m at London Bridge at around the time of the Lunar eclipse, when the picture was taken. This isn't that surprising, given that the all-in-a-line geometry that caused the eclipse also maximises the gravitational drag.

The Thames is just visible over a pile of silt, rocks, rubbish and that horrible smelling mud. To give an idea how much higher the water goes in this picture, the orange ring of the life belts at the end of each of the houseboat moorings will and did get to the top of the white of the pile.

So this spot would be under several metres of water at high tide!

Limiting the flow into the Thames over the weir will reduce the flow of silt from the Wandle, giving the Thames a chance to flush just a little of it out.

Well, thats my theory anyhow - could be completely wrong!
Posted by JP at 7:52 pm