A most wonderous device has been discovered beneath the streets of old London Town, evidence yet again of the engineering triumphs of the reign of the great and the good Queen Victoria (hurrah!)

In the time of the Great Engineer Brunel the celebrated wonders of the Empire were his famous creations of iron and steel - bridges, tunnels, ships and of course God's Wonderful Railway itself.

But it appears an apprentice of his has exceeded even these marvels! For the till-now unknown Alexander Stanhope St George succeeded in drilling a most surprisingly long tunnel, connecting the Ancient and Most Noble of cities, London, with that upstart from the colonies, New York.

Within this tunnel he fashioned a system of ingenious mirrors and lenses into the Telectroscope - by which one might peer across the ocean to see the strange behaviours of our cousins in America.

If you take a Hackney Carriage or the new fangled underground railway down to Tower Bridge you can see a crowd of most excited onlookers exchanging messages with strangers standing by the famous Brooklyn Bridge!

Alas I fear these people are quite open in communicating with those that they haven't even been introduced. Such lack of decorum would no doubt not amuse our dear Monarch.

But even the fiercest critic can not but be amazed at this most wondrous invention! 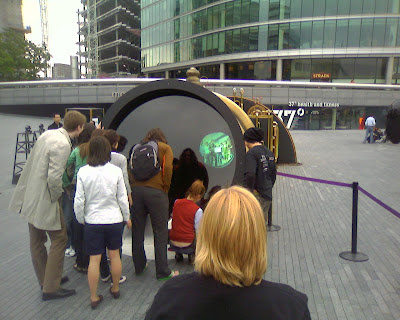 Those with inquiring minds wanting to know more can use the great global telegraph network to click here.
Posted by JP at 6:25 pm

If I had no life and you had no life I'd say hey, we should arrange to be at this thing at the same time, take each other's pictures and then do a post about it.

Fortunately I think we both have lives. I will be taking pictures of some random strangers when I sneak a visit in en route to something else.

That would be a fun thing to do! If you know in advance when you will be there let me know.

Its worth a look and its only on for a very short time which is a shame - I think it ought to be kept there all summer at least.

That would've been, and I'm sorry I couldn't come back & name a time. As it happened, I managed to go see it this morning - the weekend's plans are in flux right now & it was likely to be my last chance. I do wish they'd kept it going for a little longer!

It was fun - there was some technical glitch that was making it look very web-cam, and the Telectroscope staff was a little bummed about that since evidently that hadn't been happening before - but we had a gentleman in London doing magic tricks for the Brooklynites, and there was a guy who'd arranged to meet friends & had his cell phone & they were having great fun, and then just a lot of sign language communication (by the time I had to leave I think the facts that it was 8 am in Brooklyn and lunchtime in London).

Glad you managed to see it before it went - though shame there were technical glitches.

Its one of the attractions of living in big cities like NY and London that this sort of thing happens - but its ever so easy to miss them in the day to day rush!