A bit late in the day to add to the host of swimming posts, but here is a story from the Greek sailing holiday: Nemo and the Sea Urchin.

One day we were leaving a wonderful little bay in which there was not much more than a few tavernas, and which was filled with spectacular clear water, when the inflatable somehow became detached from our yacht.

The girls on our boat had previously worked for one of the big sailing companies running flotillas (or "flots") in the Ionian, and it is fair to say this is not the first time this had happened to them or one of their guests.

Indeed it was such a common thing that the whole "where's the inflatable got to?" had turned into a catch phrase - they were off "finding Nemo".

So soon all inflatables were nick-named "Nemo" and ours was no exception. In this case it wasn't hard to find Nemo, as the bay was very small and the wind had drifted him (hmm.... calling a boat a "him" - interesting) between another yacht and a fishing boat.

It being a hot day, the water tempting, and being known as one to jump into the water at a moments notice (even when piranha infested) I of course was in my swimming trunks and jumping to the back of the boat before you could say "is that engine in neutral?"

It didn't take long to swim over to Nemo, grab his leash and then there's the question of how to get in.

Alas the brilliant idea the brain came up with at this point was to swim to the quay side, just a few metres away, and then jump from that into the boat.

All went er... swimmingly (groan, sorry) ... and was soon rowing the boat in triumph back to the yacht and we were on our way.

For alas getting to the quay side I had stepped on a sea urchin, and now my foot was looking like a pin cushion.

Over the next few days we tried every possible way to get them out, from soaking in salt water, to ammonia, to tweezers, to pins, to digging with nail cutters, till earlier this week my GP announced there were only a few left and they should eventually dissolve.

The moral of this story is that in places where there are sea urchins and you find yourself moved by the urge to leap into water - and please do, its wonderful - it doesn't matter if you do or do not wear your costume, but please remember those shoes! 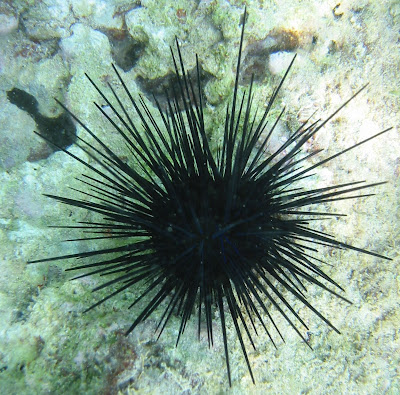 ps - if you do alas find black bits of sea urchin spine broken off in your foot there's some great advice here about what to do.
Posted by JP at 7:22 pm

oooow, that sounds painful...at least there weren't any hungry sharks around to capitalize on the situation!

So was this the same foot that was injured prior to the sailing trip?

So now am trying to work out which leg I should be limping on :(