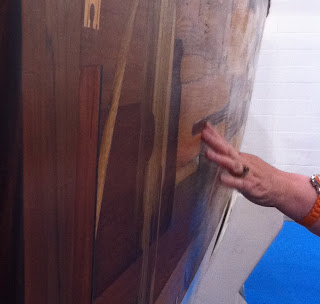 As O'Docker correctly identified, yesterday's picture was of "The Boat Project".

This is an art installation / boat being constructed as part of the 2012 Cultural Olympiad from 1,200 pieces of wood donated by the public, each piece meaning something to the giver.

It might be the drums sticks of a band, the hairbrush from the father who worked at Pinewood Studios, parts of HMS Invincible, a cribbage board, teak packing board from China, fragments of Brighton's West Pier, part of Jimmy Hendrix's guitar ..... the list is nearly endless.

Together they tell a story, a patchwork quilt of wood of the people of Britain. The boat is at present unnamed but you can vote from a short list on the boat project's web site.

She'll be launched on the 7th May and then make her way along the south coast of England stopping at places like Brighton and Portsmouth before reaching London.
Posted by JP at 2:39 pm