Preparing for the Queen's Jubilee Regatta 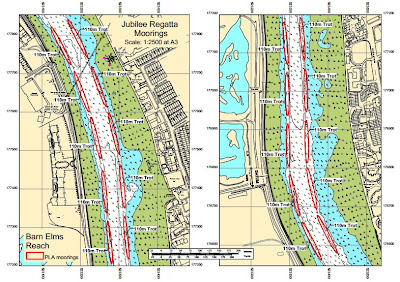 On the 3rd of June 2012 a great armada will parade along the Thames.

It will be the culmination of a series of events to celebrate the Queen's Diamond Jubilee and preparations are already well under way.

Organising a flotilla of maybe a thousand boats will of course be a mammoth task. The Port of London Authority's web site has a number of notices to mariners that point to some of the key tasks.

For example if you look at notice U4 of 2012 you see a chart (above) of the areas where moorings, and lots of them, will have to be laid in the upper river by Barn Elms. More will be laid along the route, for example in Battersea, and others by London Bridge, Tower Bridge and Wapping (see M5 of 2012). These will be used before and afterwards to martial the great fleet.

Today it was announced that the Thames Barrier would be raised on the 3rd June, presumably keeping water levels high.

In case you're thinking of going for a paddle or sail that day you best check out notice to mariners No. 9 of 2012 which basically says if you're not on the list you should keep off the river.

If you want more the pageant briefing can be found here.

As to me? It looks like I'll miss it as I have a family event that weekend, but fear not: Buff will on hand to give his minute by minute, boat by boat description. 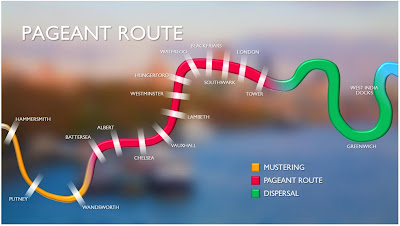 Chartlet from: Port of London Authority

Wait. I applied to sail this in my Laser. I never even got a reply. Does this mean I have been accepted? Will the queen be paying to ship my Laser to England? Will I be staying in Windsor Castle or Buckingham Palace? What time is breakfast in bed?

I think you should give her a poke on Facebook, I'm sure that'll do the trick.

Its probably got lost in the post or something

I thought it was a breach of etiquette to poke unless poken to.