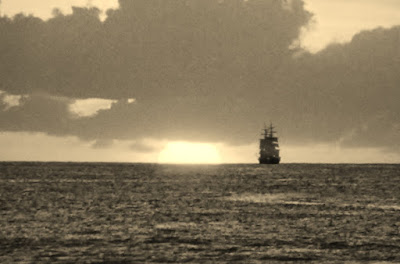 Its the time of year to curl with a book and so here's the first of a couple of reviews from 2015's reading, starting with John Masefield's Captain Margaret.

Now John Masefield is the author of the poems Sea Fever and Cargos and children's book's A Box of Delight and Jim Davis, so this should have been a cracking read, but, well, lets try a multiple choice quiz.

You're in command of tall ship, off to the Spanish main, commission as a privateer, hull full of stores and arms, to cause confusion to the Dons and glory to blighty. Do you go to sea with:
a) Jolly tars
b) A one legged cook and bunch of ruffians
c) Your sweetheart and her swine of a husband on the run from debtors?

Your captain's name is:
a) Hornblower
b) Flint
c) Margaret?

Maybe if you remember the defeat of the flying pickets on the northern fields you might have picked c) but this Margaret's name was Charles and he did indeed take his sweetheart Olivia and swine of a husband Stukeley with him.

The story does include battle scene, the storming of a town under sultry Caribbean skies, waters pure blue and macaws echoing in the wild forests, but that's only about 5% of the text, most of which relates to the emotional strains on-board and the mischief the swine Stukeley gets up to (assault, forgery, theft, attempted mutiny, betrayal, drinking, wenching etc. etc.).

The ship's master Cammock was an ex-pirate who's spent some time timbering along the Campeachy coast of Mexico, and reminded me strongly of my alleged ancestor William Dampier.

So a puzzle which could be counted a learning experience for Masefield as it was one of his earliest works. A curiosity but alas not the greatest of reads.


ps. The photo above is from my archives taken at the end of the ARC at St. Lucia and was one of the boats seen in the Pirates of the Caribbean movies.