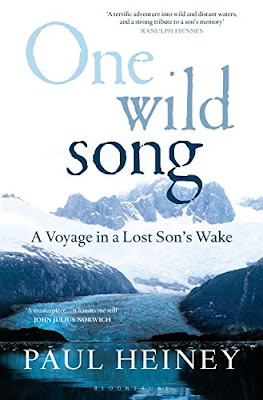 Not only was there a general election but also another excellent talk at London's premier ships chandler, Arthur Beale where attendees voted for who'd they most like to skipper their boat (see below for result).

The talk was by Paul Heiney describing the voyage which was the subject of his book "One wild song". Paul and his wife Libby Purves are keen sailors but this book is not about their voyages together as much as the aftermath of a tragedy in their life, the suicide of their son Nicholas at the age of 23.

The voyage from the UK to Cape Horn and back was a tribute and a way of remembering their son. Most of the voyage Paul took single handed, though for critical parts such as the rounding of the Horn there were crew.

More than just another story of sailing to high latitudes this book tells of emotional loss and recovery. It also works as it shows the difficulties and worries of the skipper on the long voyage.

Down to Cascais (and a £2k marina bill), further to Morocco, Cape Verde islands, across to Brazil where he and his crew got mugged, Uruguay and then on into the deep south.

Here he would explore the beautiful Beagle Channel and make his rounding of Cape Horn, to discover, as his son had written, "The silence at the song's end".

I've looked across the Beagle Channel from Argentina to Port Williams in Chile. Not as exciting as sailing it I guess, but it was about as far south as we ventured by motorbike. Felt special.

I've looked across the Beagle Channel from Argentina to Port Williams in Chile. Not as exciting as sailing it I guess, but it was about as far south as we ventured by motorbike. Felt special.