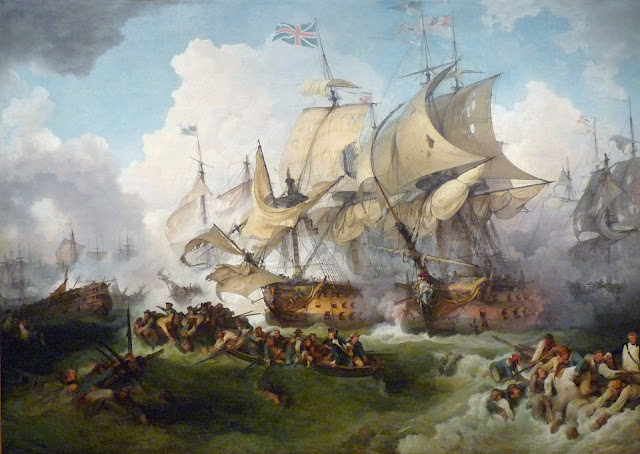 So where do you stand? Are you a fan of Horatio Hornblower or Jack Aubrey?

I've seen quite a difference in views on these two fictional characters, each with their own set of novels from the great wars at sea between Britain and France at the end of the 18th century and start of the 19th.

Of the two I first read C.S. Forester, in particular the Puffin Hornblower Goes to Sea which includes the best stories from Mr Midshipman Hornblower and Lieutenant Hornblower. But I then read the whole set, and loved them.

Over the years I've tried to find an equal, starting with a couple of Alexander Kent's books and then the Patrick O'Brian books.

Recently I thought it would be interesting to try a re-read. I had a look at various sites online that compared C.S. Forester vs. Patrick O'Brian, and there seemed to be a balance in support of O'Brian's books because of the quality of the writing. Would I agree with that?

I started with the C. S. Forester books, beginning with Mr Midshipman Hornblower and quickly making my way through the series all the way to the end. It was an enjoyable romp. Forester has an easy writing style and well structured plots that combine to create stories that kept me engaged.

There were a couple of less good ones. I'm not that keen on Atropos, Lord H and W'Indies H, but they were still readable.

So then with much anticipation I turned to O'Brian. My initial reaction on Master and Commander was "isn't the writing so much better!" - richer, more detailed, complicated characters.

But then... I got stuck. The story meandered, slowed, reversed. In the end I never finished the project, never getting to book 2.

I also remembered why I've never got beyond The Far Side of the World. There is this scene in that book (spoiler alert) when Maturin falls overboard and Aubrey jumps in after him.

I remember the golden rule of person-overboard drill is don't jump in as it makes a bad situation worse. Also, wouldn't that be abandoning Aubrey's position as captain, a court-martiable offence? Then there's an episode involving Amazonian Polynesian women or something....

Anyhow, it sort of broke the spell for me. Also, I checked on Wikipedia (the source of the image above) and read how there were doubts about O'Brian's sailing experience - or rather lack of - in real life.

Initially I'd thought this would be a close run thing, but in the end it was an easy decide. If I was to take one book from either of these series to a desert island I'd chose one of the Hornblower series, in particular my favourite, Hornblower and the Hotspur.

What do you think?

Which book from which series is your favourite and why?

I would argue that both series are enjoyable, but that O'Brien's prose, and story telling, and depth of experience, is such an order of magnitude greater than Forrester/Hornblower, you would need a Hubble space telescope to see the end of it... but that's just me... Aubrey is a joy that just keeps giving..

Maybe I should give O'Brien another go, though as I said I got stuck last time I tried and the thought of that jump-off-the-boat scene to come makes me pause.