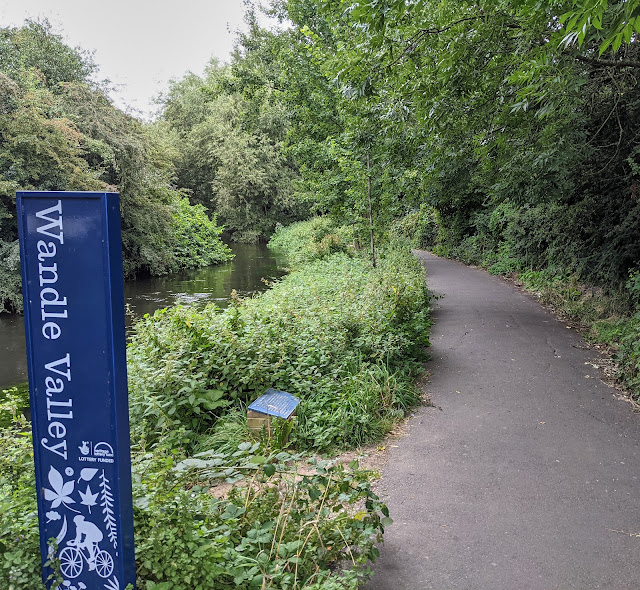 This week, from October the 23rd to 31st, is London Rivers Week, and to celebrate that I'll be posting a description of a walk I did along the Wandle River during the summer.

The basic route can be seen from this Google Earth plot which I did in three sections, as in the different colours: 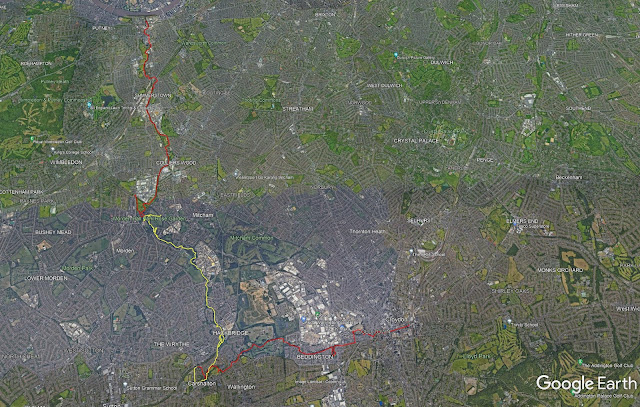 There are a number of good resources that describe the walk which is clearly signposted and generally feels like a proper walk. The one I used the most can be found on the Merton Council web site, downloadable as a PDF here. There was also one on the Wandle Valley Park web site and in practice I typically just followed the signs or Google maps.

I did the route in three segments, starting at the Thames and heading upriver, as if trying to discover it's source:

Of course you can do it the other way round. There are train / tube / tram stops all along the way so this route could be described as:

The Wandle was part of the industrialisation of London, and all along its length there were signs of this, most notably the number of mills, both working and ruined, and also in place names. Apparently at its peak there were 90 mills along its length. Inevitably it ended up as an open sewer.

Fortunately, that time has long gone, and the river has recovered and now seems in good health, with fish in its waters and birds in the air above. Having said that, the water quality was apparently not great in 2019 according to Wikipedia.

What was surprising was how many parks I encountered that I'd never heard of before.

Interesting. Last summer during the brief opening up between lockdowns, I met a friend for a social-distanced, outdoor drink. My friend lives down in Croydon (and I live in Hammersmith), and he suggest Merton Abbey Mills. I cycled down, and a lot of the route was alongside the Wandle.

Looking forward to hearing your thoughts on the whole route.

What a good idea!

It's an excellent way to get to Croydon, indeed it was a historic route, not just because of the river but also one of the earliest railways went that way to connect up the various industries along the river's length. See this link:
https://en.wikipedia.org/wiki/Surrey_Iron_Railway

The first bit (as I'll get to) isn't the best as around Wandsworth and Earlsfield the path diverges from the river quite a bit and it's rather urban. My favourite bits were Merton Abbey Mills via Morden Hall to Carshalton