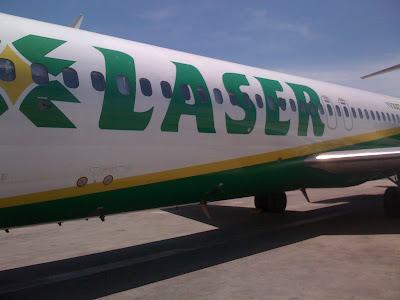 Well JP wasn't that complementary about my exclusive "Is Ben Ainslie Aqua Stig?" post earlier this month, but if you know BS you'll know he isn't down for long.

And I've been off to Venezuela - JP's not the only one travelling to the tropics. And I wasn't travelling on boring old American Airlines or Lufthansa! No - Buff was travelling by Laser!!

And who should be in the cockpit, you may ask? Well as you know I'm a fantastic linguist (unlike JP) and so was able to understand the announcement of the tannoy.

And this flight was being skippered (if I can use that word) by none other than a certain Señor Tiller-Hombre!

Ah-ha! That explains the frequent disappearances when he is allegedly going to Laser championships around the world - really he's moonlighting as an airline pilot in South America!

Hmmmm.... surely it can't be that my old chum Buff is pulling my leg again?

Anyway, if you can roll-tack and dry capsize surely landing a commercial airliner can't be that hard?