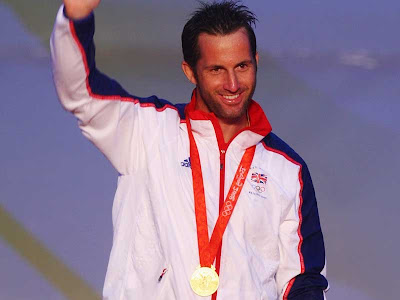 I'm out here in the fair state of California and was asked by JP to post while he was off up the Orinoco or whatever he's doing, and I've got a pippin for you too. My research amungst the Bay area sailors has revealed what has long been sailings big secret, namely who is behind those famous all weather gears of Top Yacht's Aqua Stig.

It is I can exclusively reveal none other than Ben Ainslie - three times gold medalist and of course a world expert of Laser sailing.

I'm sure you'll all be as excited at me at this scoop and ask JP for more of the ol' BS magic!

Update: JP here, just got back, and what sort of post do you call that Buff? It was late and of course is complete tosh as Aqua Stig and Ben Ainslie completed against each other in the [censured] Laser Championship back in [censored] and there are photos of them together on the quay side of [censored] which can be found by a quick google. Did you do that research late at night in some bar?

Update - update! BS here again, hey, well I won't bother next time! And by the way what ever you do not ask JP about his travels as he's already been yacking away about eating termites, swimming in rivers where there are pirana fish, and something about the curious incident of the frog in the night time.
Posted by JP at 3:56 pm

I think it's actually Cam Lewis, but reading Paul Cayard in Seahorse this week it might be him.
Or is it someone up and coming like Torvar Mirsky.

Stay out of that noonday sun, Cap'n

Alas too late, spent days out in the blinding equitorial sun.

Mad dogs and Englishman as they say