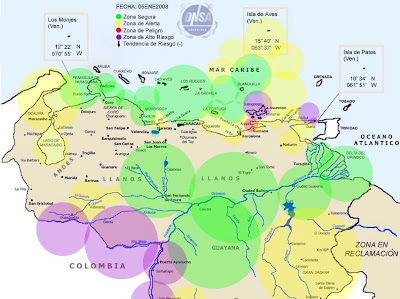 The picture above I found on Elaine Buntings blog on the Yachting World site and shows the relative danger levels in various waters of Venezuela, where of course I am now.
It suggests the most dangerous areas are around the port of Cumana, which matches what Liza Copeland (author of Just Cruising and Still Cruising) said when I asked her about it at the London Boat Show, namely its the small inner islands that are the most risky.
Alas I am rather landlocked at the moment. One plan was to find a way to get to that old pirate haunt of the Isla Tortuga. Charting a yacht to sail through the Caribbean night to an island of legend had a certain thrill to it. However it all proved too difficult as was planning to go to Isla Margarita but the yacht charter business is based in Los Roques.
The second plan was to find some resort here where could sail Lasers or Hobies, but all my googling and emailing failed to locate one, though I can't believe there isn't a single one on the island.
But why come to the Isla Margarita anyhow, you might ask? Well this turned out to be the launching place for trips into the interior, trips to the Orinoco Delta and to Angel Falls. And those two looked unmissable.
So here I am in an internet cafe (or Cyber Cafe as I've learnt to ask for), in a so called Caribbean paradise where it actually is poring with rain and monster waves are crashing on the beaches.
According to the figure the places which am planning to visit are yellow or green, though where I am now it is a rather less reasuring purple.
But I keep telling myself that the statistics are that most travellers have no problems, and actually you, dear reader, are probably in as much a danger from traffic accidents.
Though of course I hope that neither of us has any reason to be concerned!
Posted by JP at 8:49 pm