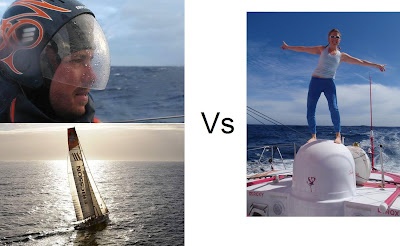 The Vendee Globe is winding down and those with Sam Davies withdrawal symptoms have been checking out the other circumnavigating yacht race, the Volvo. But to me at least it's not the same.

I remember back in November posting a 10 point list of why the Vendee is better (ok, it was only 9 but surely there must be another there somewhere) and a similar comparison has been bubbling through the mind of Yachting World's Elaine Bunting in her blog here.

The post raises a number of topics, including the degree to which the greater loads in VOR70 gives a bias towards male sailors and how that could put off some members of the public. She even raises the Mike vs Michelle Golding debate on whether female sailors get greater coverage and if so is that right?

I've been thinking over her arguments over the weekend and don't have any conclusion, just some further points to mull over.

If having men only in teams was a significant problem then Manchester United wouldn't have a global fan base and Formula 1 would be in even greater financial difficulties than it does at present. There does seem to be an appetite for sport viewers to see the highest level of competition - or, as the VOR marketing team would no doubt put it - at the extreme.

And it is certainly true that the VOR is getting support: see the crowds by the dock side for the races and most impressive armadas of virtual sailors following it in the Volvo game. There are some virtual racers that have over a month of log-in time -now that is real commitment and advertiser friendly eye-ball time.

But the VOR does have a problem that neither Man U nor Formula 1 has - lack of continuity and hence fan base. It is harder to feel connected to an international telecom vendor that has funded a campaign, and even less so when it is a one-off sponsorship. It is notable that Ericsson is unusual in that it funded a boat in a previous campaign, not the norm.

If you support a football team you have a good chance of following them not just year in year out, but decade after decade (though that can be a bad thing - one's sympathy must go to those Leeds United fans who have now only distant memories of life in the Premiership).

You can follow individual sailors in the Vendee, but for the VOR its usually a different crew and team name each time round. So Torben Grael is skipper of Ericsson 4 this time round, but in the last race it was Brazil.

It hasn't helped that the VOR didn't offer the great Virtual Spectator viewer which I really appreciated when it was available for the previous race.

Also as posted earlier, the single handed nature of the Vendee Globe makes it a more gripping story, and it is story that we humans like and brings engagement. And it is this engagement that brings media coverage with it, as Sam Davies showed.

Ultimately it will all be decided by sponsors and whether they happy with the return they get on the huge sums required to fund a VOR team. But it is notable how few there are: given the drop outs the fleet for the current leg is only 5 strong and given the two Ericssons that represents just 4 sponsors.

Probably this isn't a question that only Ericsson corporate PR can answer: given what they know now would they rather sponsor next time round a VOR or a Vendee Globe?

It might well be the answer has nothing to do with gender or sailing but something much more simple. If you are doing a corporate PR junket you can get more wanabee sailors in a day sail on a VO 70 than in an Open 60!

So what do you think? If you could modify the VOR what would you change?
Posted by JP at 11:32 am

JP, I agree. The Vende is definitely the more extreme of the two, but down here in Africa we dont get much coverage on the Vende. We have a weekly program on the VOR and Cape Town is one of the major ports. So on exposure the sponsors cant but back the VOR teams.

Jip, bad that there was no virtual spectator this time round on the volvo.

I would really like to see more coverage on the Vende, because they are the bad asses of sailing, not the VOR.

Thanks for your comments - agree with you too.

What's weird is that the TV coverage of the Volvo clearly shows the old virtual spectator: its just available for a select few.

You make some good points, but you assume that sponsors like Ericsson are doing the VOR for spectators. This is not always the case. In fact recent VOR competitors like Assa Abloy and News Corporation couldn't have cared less if anyone was watching. For them, participating in the VOR was about internal comms; bringing together worldwide employees around a single team. Assa Abloy had recently aquired several companies and was trying to integrate clashing cultures. The VOR and its stops was one way to achive those ends.

Similarly, there are business to business relationships that can't be underestimated. Although Puma is launching a range of sailing gear, they are also a major sponsor of the Soccer World Cup which is to be held in Africa - one of the stops on the VOR.

Here's a story that might give some perspective. An F1 team was looking for a computer sponsor a couple of years back. They didn't want money, just a couple of high-end CAD stations for use by their designers. The sponsor would not get any branding on the car. So why would they do it?

The VOR is a truly global race. Its a shame the budgets are so high and the boat count is so low.

I've been wondering about the p/l of sponsoring the Volvo and it does seem a lot of money for relatively little media attention compared to (say) a premiership football team.

Two angles came to my mind: firstly there was as you say the internal company moral / vision thing and the other is image within the industry.

I'm sort of in the Ericsson industry and I would certainly have a more positive attitude towards them if they gave me a day sailing on one of their VOR70s (hint hint).