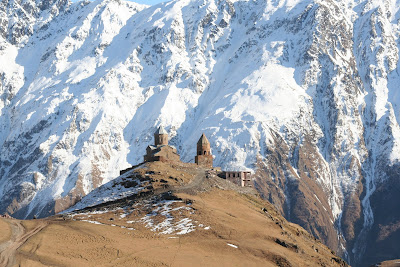 The Georgian Military Highway was spectacular, the Ananuri fortress and church stunningly beautiful, however the Tsminda Sameba Church, well.... but first to describe it.
Near the closed border with Russia is the town of Kazbegi. It is famous in its own right for being the home of one of Georgia's greatest writers Alexander Kazbegi (yes, he took his name from this town) and while at a height of 1,750m, it sits deep in the valley between snow capped mountains.
Above it on a peak is the iconic Tsminda Sameba Church: 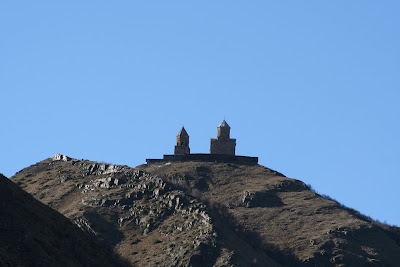 Above even it looms the 5,047m high extinct volcano that is Mount Kazbek: 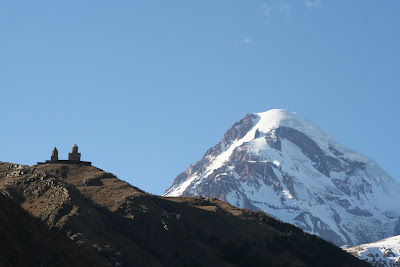 On most days either the church or mountain will be hidden by clouds but I was unbelievably lucky in that the sky was nearly cloud free - my guide had never seen it so clear.
The proper way to approach it is by foot to give the setting the respect it deserves and appreciate the work required to build it. Alas given all the other sights to see that day we had to trust a 4 wheel drive SUV to clamber up the windy track to the top.
Apparently the Soviets installed a cable car, an act of defilement which was promptly and quite rightly dismantled by the people of Kazbegi.
The church is one of the symbols of Georgia, the land and its people. Built from deep faith in their Eastern Orthodox church it is at one with the landscape.
In summer it is a centre for tourists, but that afternoon we were the only visitors. There was just me, my guide, our driver, and one priest keeping watch in the church.
Here life must have been - and indeed still be - hard, with deep biting cold in winter, but with rewards too. 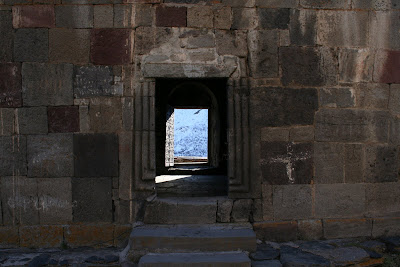 Time to go? asked my guide, keen to get back to Tbilisi and knowing the long, hard road back. I asked for time to savour this amazing place.
It was a truly magical moment.
From the church you could look around at the ring of mountains around the horizon. 1,500 feet below was Kazbegi and in the clear air every feature could be seen sharply.
There was a peaceful quiet in which could faintly hear the roar of the river in the valley far below. 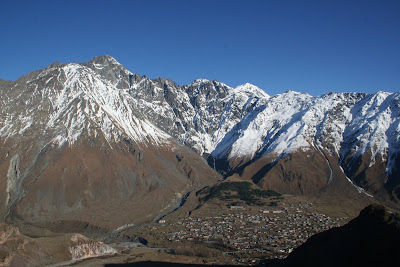 Above was the magnificence of Mount Kazbek, gleaming white against a blue skyline.
It made one feel as if above the world and yet still insignificant. 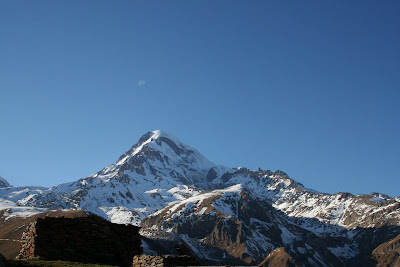 We got talking to the priest, who turned out to know some English from some time living in London, and there was a surreal moment when the discussion turned to the names of the tube stations in Putney.
Yes, he said, life here is hard. In September there was a heavy snow fall and for several days there was no electricity or gas, and we lived as in medieval times.
The sky at night must be amazing I said.
Yes he said, I like to come out here at 6 am before the sun has risen when the stars are still out, it is......
He seemed lost for words, but I could imagine it.
I can't find the words either, so you will have to imagine it too.
Posted by JP at 10:25 am

GOsh now I realise how amazing a trip you had. Was given a tip off by key informant RP that this blog is AMAZING.
See you next Sat in suny SHeffield
No snow but lots of autumn leaves

The verification word is pealness.

Does the church have a bell, and does it ring through the mountains? The way such a sound would echo from the hard peaks through the clear air ... it must be amazing.

Even if there wasn't a bell, that must have been a magnificent experience.

Carol Anne: yes, they do have bells and it would ring out over the mountains and valleys. But didn't hear it when there.

But it wouldn't be much good as a call for service as it takes one and a half hours to climb up to it!