Ebony and Ivory at Trafalgar 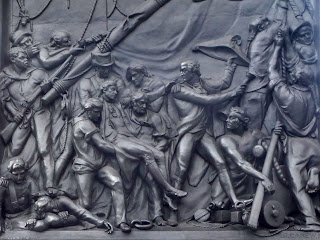 The song calls for ebony and ivory to live in perfect harmony. But a documentary on TV last week described how together they fought the French and Spanish at Trafalgar.

"England Expects" was what Nelson called for, but the fleet was a mixed bag of nationalities and races. The British Navy (for it wasn't just the English) was for its time relatively egalitarian. It needed sailors, lots of them, and how they worked was more important than the colour of their skin.

Of the 18,000 sailors in the fleet there were 1,400 non-Brits from 25 nationalities. The program looked at the log-book of HMS Bellerophon, which included Swedes, Danes, West Indians, French (possibly Royalists) and American's (one white who was press ganged and one black, likely a run away slave).

Indeed there was maybe a couple of hundred coloured sailors, mostly ex-slaves for whom a life in the Royal Navy was better than that in the plantations.

While below decks black and white could work together as one, there remained limits in promotion opportunities. The quarter deck was beyond reach, a petty officer role was the most they could hope for.

But their role was not forgotten. The frieze above is from one side of Nelson's column in Trafalgar Square, and on the far left there is clearly an African sailor, one of the crew along with Nelson.

The face might look different, but the navy in 1805 was one of the few institutions where that meant less than what a person could do. And that was one of the factors that led to them winning the day, beating the combined fleets of both France and Spain.


Updated: O'Docker kindly tweaked the pic to make the faces stand out more
Posted by JP at 9:05 pm

The war ranks included many fishermen and sailors pressed at any opportunity. The world's fishery and sailing trades were a grab bag of nationalities with one vagary in common; they didn't get on well, on land.

The placing of a black sailor in such a prominent position was to emphasise the Navy's role in suppressing the slave trade. Just because it is a memorial doesn't mean it can't be political comment....

Thanks Darryl and Ruth!

The TV program was a bit over the top in its own self important "we will change how you view Britain for ever" or some similar codswallop in the introduction.

But it was certainly informative, particularly given the details on the crew of the Bellerophon.

To me it was interesting that the African figures here and in the great picture in the Palace of Westminster were shown as being actively involved the battle, not just passively being rescued by the Royal Navy.

Maybe it helped that there's nothing like having a common enemy to unit disparate people!

Although foreigners couldn't be officers, the British navy was more egalitarian and meritocratic than the army of the time, where officers bought and sold their commissions and spent much of their time in a regimental social club setting with many of them interacting minimally and poorly with the other ranks.