Shakespeare and the sea 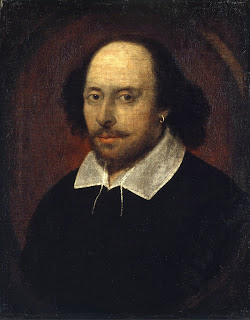 Yesterday, as you might have guessed from the last post, was off to the Old Vic to see Shakespeare's The Tempest, which starts off with a dramatic storm at sea.

And it got me wondering about the bard's nautical connections, for that is not the only shipwreck in his plays, and he is famous for saying things like "There is a tide in the affairs of men, which, taken at the flood, leads on to fortune."

Despite his early years in land-locked Stratford it was in London that he wrote his main plays, and in those days London was already a great sea port. In the Elizabethan age its population was much smaller, likely around 200,000, clustered around what we now call The City and Westminster, and across the river in Southwark, the home of The Globe theatre.

Here Shakespeare could not be unaware of the ships coming and going in the Pool of London, barges and barques, river traffic and those heading across oceans. No doubt he would have talked to captains over a pint or two of beer in some pub by the banks of the Thames, and the ebb and flow of the tide would have been as well known as the rush hours of today, and as important to traffic.

It made me think of the book I'd read recently, The Defeat of John Hawkins. At first I thought they might be contemporary but the Hawkin's third voyage was 1567 - 69 when Shakespeare would have been just three. However he was 24 when the great Spanish Armada came threatening England's shores, and when the likes of Hawkins and Drake went out to battle in their galleons.

Those days of fear and the relief at eventual victory, combined with the stories of ship's captains of lands across the ocean must have made a huge impact on him, as can be found by the references dotted thought-out his plays.

Wishing to know more I did the inevitable Google and found this book with the title "Shakespeare and the Sea" which sounds like should just the thing. I then found a second hand copy on Ebay with a Buy It Now Button which then, in the heat of the moment, clicked upon.

While slightly concerned it might just be a list of quotes I'm hoping for more, for this could be a fascinating subject. The connections between England's greatest play-write and our maritime history should be a good read, but for now all I can do is just sit and wait for the parcel to drop through the letter box.

It could even be a holiday read, but that might be asking too much. Either way it will no doubt become the subject of a future post.

Shaxpur, must have been a nautical cove. Who else could pen such verse:

"Her gentlewomen, like the Nereides,
So many mermaids, tended her i' the eyes,
And made their bends adornings: at the helm
A seeming mermaid steers: the silken tackle
Swell with the touches of those flower-soft hands,
That yarely frame the office."

As great as that sounds, I'm so lost. Green eggs and ham is much more my speed.

In Will's time, the theater was illegal, at the whim of the monarch. The Globe recieved patronage, but was mostly for the rabble.
Shakespeare probably had many friends who were sailors and we all know of the sailor's virtues ashore...

Well a lot of Will's plays have a number of juicy double entendres if not quite outright rude.

I'm coming late to this discussion and recognize that you've probably moved on. There's a book on just this topic -- Alexander Frederick Falconer, SHAKESPEARE AND THE SEA(London, 1964).In part it's a glossary of sea terms with examples from Shakespeare. It's witty, too. Sonnet 116, "Let me not to the marriage of true minds," is in his hands "a navigational sonnet" with its many references to steering without alteration, and the constancy required to manage a vessel safely at sea. There are copies at ABEBOOKS.COM. -- John Rousmaniere

Thanks John, yup, read that book and its reviewed here: