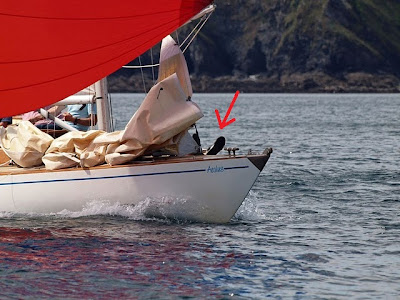 Well I've always said that JP was a bit of slacker and now I've got the evidence to prove it. This photo was found on the interweb thing and it clearly shows Aeolus, the boat that JP claimed to be crewing as foredecker.

But what is this we see? Two boots, clearly raised and at rest, the owner lying back relaxing - in a race!!!

If I'm shaking my head it is more in sorrow than disbelief.

This is Buff Staysail, disappointed but not surprised, signing off.
Posted by JP at 7:35 pm

Actually for once Buff might have a point: only one week's sail during the year isn't that great.

Will try to do better next year - honest!

Isn't JP one of those computer types, Buff? Maybe he was just rebooting.

"Checking the set of the spinnaker" was his excuse.

JP is not slackin'! He's just scrutinizing the angle of apparent wind and workin' hard! I am very familiar with, not to mention comfortable in, this position!

The fact that I didn't manage to take any of those nice spinnaker photos like you did makes me think I must have been at least slightly focussed on the sail.