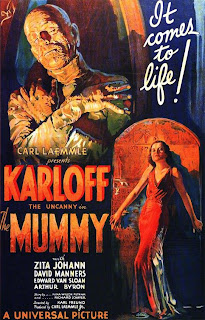 No, I do not have a glamorous life sailing around the world, enjoying stunningly beautiful blue water, but like them today is an anniversary.

For me it is blogging, for 6 years ago today the first post went live. If I were 6 now I would be out there banging on doors demanding free chocolate, for today is Halloween!!

Being a little bit older I'll be connecting some appropriately spooky dots, and going back to the painter John Martin. As well as a career in art and a side line in designing London's sewage system he had time to raise not just 6 of his own children but also take under his wing a young woman called Jane Webb.

Jane Webb went on to write The Mummy (above) and the ever connected John Martin could also claim to know William Goldwin whose daughter wrote Frankenstein. It might not have been a coincidence then that one of Martin's own daughters married an Egyptologist.

Indeed there sometimes seems no limit to the connections John Martin made. He shared lodgings with the future King of Belgium (who became godfather to one of Martin's children) and at his dinner parties you could meet Dickens, Michael Faraday, Turner and John Tenniel, the illustrator of Lewis Carroll's books.

One amazing story has him on the footplate of a steam train with none other than Isambard Kingdom Brunel thundering along at 90 mph as they proved conclusively that a train could go faster than a horse.

And talking of connections, or perhaps weird coincidences, last night Tillerwoman and I watched the movie Another Year. We like movies about life in England (for obvious nostalgic reasons.) The husband in the movie (played brilliantly by Jim Broadbent) is a geological engineer and guess what project he is working on?

The Thames tunnel super sewer - as so comprehensively reported on your blog! What a small world!

Jim Broadbent is a great actor - almost everything he does is worth watching.

There is something fascinating about those dark gothic tunnels beneath London, a whole hidden world under our feet.

And congratulations on writing such an excellent blog for 6 years. Very few have maintained such high standards for so long.

There's no such thing as free chocolate.

Congrats on turning six - an accomplishment I appreciate a lot more now.

It's still the same old story,
A fight for truth and glory,
A case of blog or die,
The fundamental rules apply,
As time goes by.

I now have a spare bag of M&Ms, which is a close to free chocolate as I'm ever going to get :)