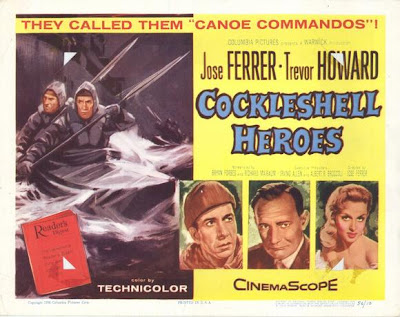 Last night the BBC had a TV program about Operation Frankton, the operation that was turned into the film Cockleshell Heroes. I had only heard a little about this WW2 raid by on Bordeaux by canoe and so found it very interesting indeed.

However in addition I was lucky enough to be sent anonymously the following Health and Safety Report:

The first question about this raid comes from the selection of the commandos, and whether there was a proactive inclusivity policy? Given that all marines were white males, I think not!

The unit set off from a submarine in the English Channel in the evening of the 7th December 1942. Over the next few days it was clear that the marines were forced the exceed the mandatory working hours limits laid done in EU Directive 2003/88/EC. Furthermore the anti-social hours were counter to good home/work balance and there were no child minding facilities.

The unit were in paddling low profile kayaks, painted a dark colour, at night, in a busy shipping lane up the Loire river with a significant amount of traffic (Nazi patrol boats), and yet they didn't have a single high visibility jacket between them! Why?

At the entrance to the river were a number of tidal races with overhangs resulting large waves with steep sides. In the confusion and conditions several boats were lost, either to the elements or ending up in enemy hands. Only 2 of the 6 boats made it through.

In such situations it would be understandable, as an act of respect and sensitivity to those lost, to return immediately for intensive counselling at the Happy Bean Bag Therapy Centre. That they continued is indicative of a retrograde phallocentric management style rather than modern inclusive whole-person holistic decision making.

The remaining commandos then encountered some local French fishermen and their families who provided them with fresh bread and half a bottle of red wine. At no point did they enquire as to whether they used approved baking processes or what the bread's use-by date was. As to the consumption of alcohol while carrying high explosives, well words fail me!

After leaving the fishermen, the remaining two kayaks paddled on up the river, covering 25 miles in one stretch. And yet none of the team was a qualified physio-therapist and the constant repetitive motion was simply asking for RSI!

On reaching Bordeaux the two kayaks split up and laid their limpet mines against the sides of ships trading with the enemy. In the resulting explosions, yes, they did destroy 5 or 6 ships, but did no one consider the noise and provide them with ear protection? That is was ISO 4869 is for people!!

At this point they ran away - and not just back to home as they should. The remaining four (well two, as the other team were captured) made their way through France, into Spain and thus to a Crown Dependency, Gibraltar. Did they have no idea of the amount of paper work that would generate? Had they no consideration for others??

Officially the two survivors, Major Hasler and Marine Bill Sparks, were welcomed back with a DSO and DSM respectively.

But if Health and Safety had had their way they would have been awarded an F-.
Posted by JP at 9:15 pm

My father took me to see the movie Cockleshell Heroes when it first came out. I could only have been 7 or 8 at the time. I must admit to being traumatized by the scene in which the captured commandos were executed by firing squad. Scenes of battle didn't bother me but that seemed somehow different and very cruel.

Blondie Hassler, of course, went on to invent the first practical wind-powered self-steering gear for yachts and had a distinguished solo ocean racing career - or is that the topic of your next post?

Close - maybe you can help.

I was wondering what the Health and Safety Report on single handed sailors would say!

Sure. What kind of help? Childhood reminiscences of 1950s WW2 movies? We did seem to go to a lot of them.

Maybe it was my Dad's way of educating me about his war? Or perhaps he just liked to see those films himself?

All good subjects for posts - blog away Tillerman!

ï»?Somebody prefers to accomplish bodybuilding or perhaps do his or her favorite activities I could not believe it but I had a gut feeling that I was right in my conclusion
There are so many pro and college football fans and they love to represent their team Well[url=http://www.officialpenguinsauthentic.com/evgeni-malkin-authentic-jersey.html]Evgeni Malkin Womens Jersey[/url]
maybe you ever feel that you have no other options than spending your hard earned money to afford buying the jerseys for your pride as a fan