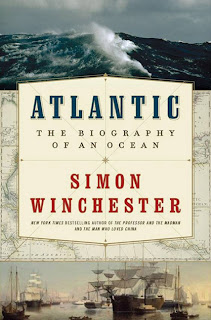 I actually finished this book a few weeks ago but pressure of work meant this review had to be put off.

In one way its a shame, as many of the minutiae of Simon Winchester's weighty tome have already merged together in one almighty swell. But maybe that is appropriately like the great ocean it describes.

This impressive book uses as its frame the seven ages of a man's life as given in Shakespeare's As you like it:

Infant: here we learn about how humanity first discovered the ocean - maybe very young in our history, on shores of South Africa

Schoolboy: in which various expeditions are sent out to turn those here be dragons and the edge of the world myths into charts and scientific discoveries

Lover: describing how the Atlantic has been portrayed in the arts, in art, music, novels and plays, including of course Shakespeare - who can forget The Tempest?

Soldier: alas these waters have run red too many times in our history as the blood of good men and women has dissolved into the sea, from the Romans to the Falklands.

Justice: ok, well in fact this section looks at trade, from the infamous slave trade to the beaverings of the Hanseatic league, to the packet ships and telegraph cables

Pantaloon: with old age creeping in Winchester looks at how we have despoiled our own environment, such as the catastrophic (and rather stupid) over fishing of the Newfoundland Grand Banks

Sans everything: takes the big view of an ocean that is getting bigger as sea levels rises and storms and flood threaten our great cities, and yet in the very long term is doomed as continents divided rejoin, squeezing the Atlantic away

Its one of those books that demand phrases like large canvas, for it is a huge subject. But Winchester does it proud, and his travels have given him a rock to build on.

From the south and being locked in a prison cell in Argentina during the Falklands war to the far north and being stuck by bad weather in a distant Greenland fjord called Scoresbysund, his many travels and experiences add flavour, colour and a human scale.

If I had to quibble I'd say the structure doesn't match the standard story structure, making it at times disjointed - oh, and the hardback version is too heavy.

But overall I really enjoyed this read and wouldn't hesitate to recommend it. Just make sure you get the paperback version!
Posted by JP at 9:44 pm