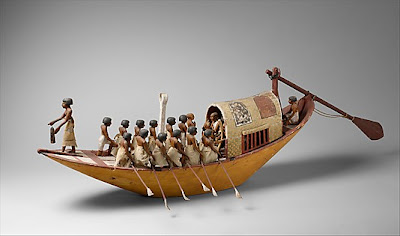 Many, many years ago when the world was young there lived in Egypt a Pharaoh named Sneferu, who was father of Khufu that built the Great Pyramid at Giza.

Being a time of peace and plenty there was little to worry this great lord as he lived in his great palace in Memphis by the side of the mighty Nile.

Indeed it could be said he was bored.

Hence he called forth his Chief Magician, Zazamankh, to entertain him.

"O Pharaoh: life, health, strength be to you!" said Zazamankh. "My counsel is that you go rowing or sailing upon the Nile".

"Yawn" said the Pharaoh. "Been there, done that, got the t-shirt."

So Zazamankh called forth the officers and attendants of the Pharaoh Sneferu.

"Bring me twenty oars of ebony inlaid with gold, with blades of light wood inlaid with electrum" said Zazamankh. "And for rowers choose the twenty fairest maidens in the Pharaoh's household: twenty virgins slim and lovely, fair in their limbs, beautiful, and with flowing hair. And bring me twenty nets of golden thread, and give these nets to the fair maidens to be garments for them."

So it was done as to the words of Zazamankh and presently the Pharaoh was seated in the Royal Boat as the maidens rowed him up and down the stream.

And the heart of Sneferu was glad at the sight of the beautiful rowers.

"Zazamankh, you are the greatest of wisest of magicians" said the Pharaoh. "Your reward shall be all that you desire."

And thus it was that rowing was made interesting.

Editors note: there was a bit more about a broach being lost (see here) and Zazamankh's wand work to retrieve it which you can read all about in Roger Lancelyn Green's book Tales of Ancient Egypt.

Photo from: The Metropolitan Museum
Posted by JP at 3:25 pm

Was with yer right up to the part about the twenty virgins and then I knew yer was spinnin' yarns again, JP.