Nelson's Ship in a Bottle at its new home 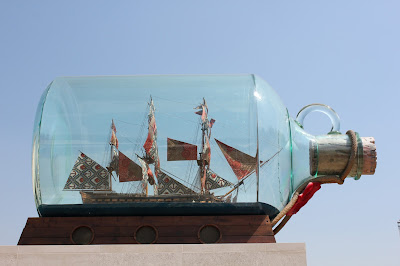 While it was disappointing to find the Cutty Sark closed yesterday I took the opportunity while in Greenwich to see Nelson's Ship in a Bottle at its new home outside the National Maritime Museum.

And very good it looks too. It links the navy and empire with the peoples involved, combining a historic sailing ship with fabrics in a way that really works next to the new wing overlooking Greenwich Park (currently filled with Olympics preparations).

This evening there was a reception where its artist, Yinka Shonibare, gave a short talk about his thinking behind the work and what he wanted to achieve.

Make people think was one of his objectives, but maybe as important was to make a connection, for that is where it excels. It opens up the NMM to a wider audience and that can only be a good thing.

You can already judge its success by the steady stream of visitors having their picture taken with it in the background, at home as if it was designed for that location in mind rather than the 4th plinth in Trafalgar Square.
Posted by JP at 9:30 pm

If connecting with the public is a primary objective, this must be a better location.

How many, after all, can comfortably pronounce fourth plinth ?

The new site is also visible to those visiting the Olympic equestrian event.